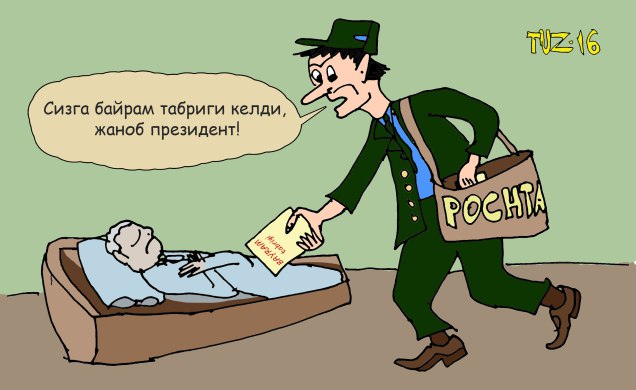 German media articles reporting on the Uzbek President’s death focused on the controversial legacy of Karimov’s long-term rule with an iron fist, the fact they have not hampered his good relations with Western countries, especially Germany and the unresolved question of his succession.

Contradictory news from Uzbekistan at the end of August and confusion about Islam Karimov’s state of health was also noticeable in the German media. Before the death of Uzbekistan’s long-time leader was officially announced, German media remained reluctant to publish any in-depth analyses or opinion pieces on the issue. Die WELT described the Uzbek dictatorship as a „blackbox“, from which reliable information could only be obtained with a certain delay.

“Authoritarian leadership with an iron fist”

All German media articles commenting on events in Uzbekistan recalled the authoritarian and repressive regime that Karimov had established and developed during the 25 years of his rule as President of Uzbekistan. Deutsche Welle, for example, reported on the lack of competition in elections,  the lack of balance of power and of a functioning political opposition in Uzbekistan. Quoting the political expert Uwe Halbach of the Foundation for Science and Politics), it described Karimov as “the presidential autocrat par excellence in the post-Soviet space” and the political system in Uzbekistan as a “far-reaching presidential rule that is even more pronounced than in Russia”. SPIEGEL Online recalled that Uzbekistan had never become a democratic country but instead was founded on manipulated elections, brutal repression of any opposition and systematic torture. Critics were being silenced or detained, often under the allegation of being terrorists. ZEIT Online described Uzbekistan, next to Turkmenistan, as the “harshest dictatorship in the region” in which Karimov had secured the country through the use of repression and violence. TAZ.de took up this approach, calling Uzbekistan “one of the world’s most brutal dictatorships” without freedom of the press or any legal opposition and  systematic use of torture. BILD described Karimov’s rule as “authoritarian leadership with an iron fist”, ranked 166 out of 180 in the Freedom House index.

Concerning the repressive methods of Karimov’s rule, many German media articles, for example in the Süddeutsche Zeitung, Tagesschau.de, Frankfurter Allgemeine Zeitung and Deutsche Welle made references to the Massacre of Andijan of 2005.

The Süddeutsche Zeitung, Frankfurter Allgemeine Zeitung and SPIEGEL Online mentioned the Uzbek state system of forced labour in the cotton sector, the latter making reference to an article from 2010.

The Süddeutsche Zeitung described how structures from the Soviet era were still alive in Uzbekistan: As it was not common for dictatorships to speak openly about a leader’s illness, let alone death, before the question of succession had been resolved, the Uzbek people would only be informed after Karimov’s death and would not be involved in the successor question. Uzbekistan, like other post-Soviet countries, had stopped halfway on the path towards freedom and democracy. In such countries, the Soviet Union would go on living “through its metastases” in which despots like Karimov could reign through their own established systems, based on old power structures and tailored to their specific needs. The impression of an ongoing Soviet microcosm could also be found in other German articles, for example in an article by TAZ.de which described Karimov, next to Kazakhstan’s leader Nursultan Nazarbayev, as the “last Soviet dinosaur”.

Population lives in poverty while elite enjoys the high life

German media described how Karimov leaves behind a run-down country marked by deeply entrenched corruption and no noticeable economic achievements. SPIEGEL Online, ZEIT Online and Süddeutsche Zeitung observed that although the country was rich in resources, the majority of its population lived in poverty while the government elite was enjoying a luxurious lifestyle.

“Sunning itself in international importance”

Most of the German media articles recalled that, despite allegations of systematic human rights violations, western countries had been cooperating with the regime, above all Germany and the United States. TAZ.de emphasised that Uzbekistan had been “sunning itself in international importance” for years. And while Germany and the U.S. had recently ended their military presence in the country, new cooperation in the fight against terrorism has already been taken up. Global players, Russia and China, were mentioned by Deutsche Welle and Tagesschau.de) as today’s most influential partners in the region with concurring interests in Uzbekistan’s strategic and economic importance.

All German media pieces elaborated on the question of who could succeed Islam Karimov and pointed to the possible risk of a destabilisation of the region. Tagesschau.de, as well as other German media, did not expect a fair change of power to be very likely. Instead, they forecast an intensified power struggle among the different clans and other groups of the elite. Most of the media including BILD, Deutschlandfunk, Tagesschau.de and Deutsche Welle, regarded the power vacuum as a possible source of instability in the region.

Not much hope for change

German media have named three possible successor candidates: the current Prime Minister Shavkat Mirziyoyev who has just been appointed interim president, the Minister of Finance Rustam Azimov, and the head of the National Security Service (SNB) Rustam Inoyatov. Islam Karimov’s daughters, in turn, were not considered to have much chance of following in their father’s footsteps in light of the current family disputes. It is assumed by many of the German media (for example by Die WELT and SPIEGEL Online) that another strong, paternalistic leader from Karimov’s inner circle, a “second Karimov”, will become the next Uzbek president. Whoever it might be, none of the German media articles expressed real hope for change in the country. Although the departure of one of the last “Soviet-apparatchiks” marked the end of an era in the region, one could not expect a new, more liberal  period to come (Die WELT).