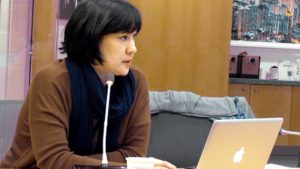 Umida Niyazova is a director and founder of the Uzbek Forum for Human Rights. She worked as a human rights advocate in Uzbekistan from 2000 – 2008 when she was forced to flee her country because of her work. She has worked in the Tashkent offices of organizations such as Internews Network, Freedom House and Human Rights Watch.

In 2007, Umida was arrested in Tashkent and sentenced to seven years imprisonment on charges of “illegally crossing a border”, “production or distribution of materials that threaten public safety and public order”, and for “smuggling extremist religious materials”. After a widespread outcry and with the support of international organizations, she was finally released after four months in prison.

Uzbek Forum works with a network of local monitors inside the country who have intimate knowledge of their communities and the social and political landscape of Uzbekistan.

Uzbek Forum has published dozens of reports, articles, videos, and podcasts that have informed policymakers, including Uzbek government officials, investors such as the World Bank, international human rights bodies including the UN, and perhaps most importantly, Uzbek civil society itself.

Uzbek Forum collaborates with other human rights organizations and has published joint reports with Human Rights Watch (HRW) and Solidarity Center, maximizing visibility and leverage in the international arena. Uzbek Forum is a frontline partner of the Cotton Campaign, a global coalition of NGOs, trade unions, retailers and investors dedicated to eradicating child and forced labor in the cotton industry. The Cotton Campaign’s advocacy strategy and messaging are informed by Uzbek Forum’s reports, based on witness testimonies, photographic and audio materials gathered by our courageous and skilled monitors.

Uzbek Forum was nominated in 2018 and 2019 for the Human Rights and Business Award for organizations “doing important work and deserving international recognition”.