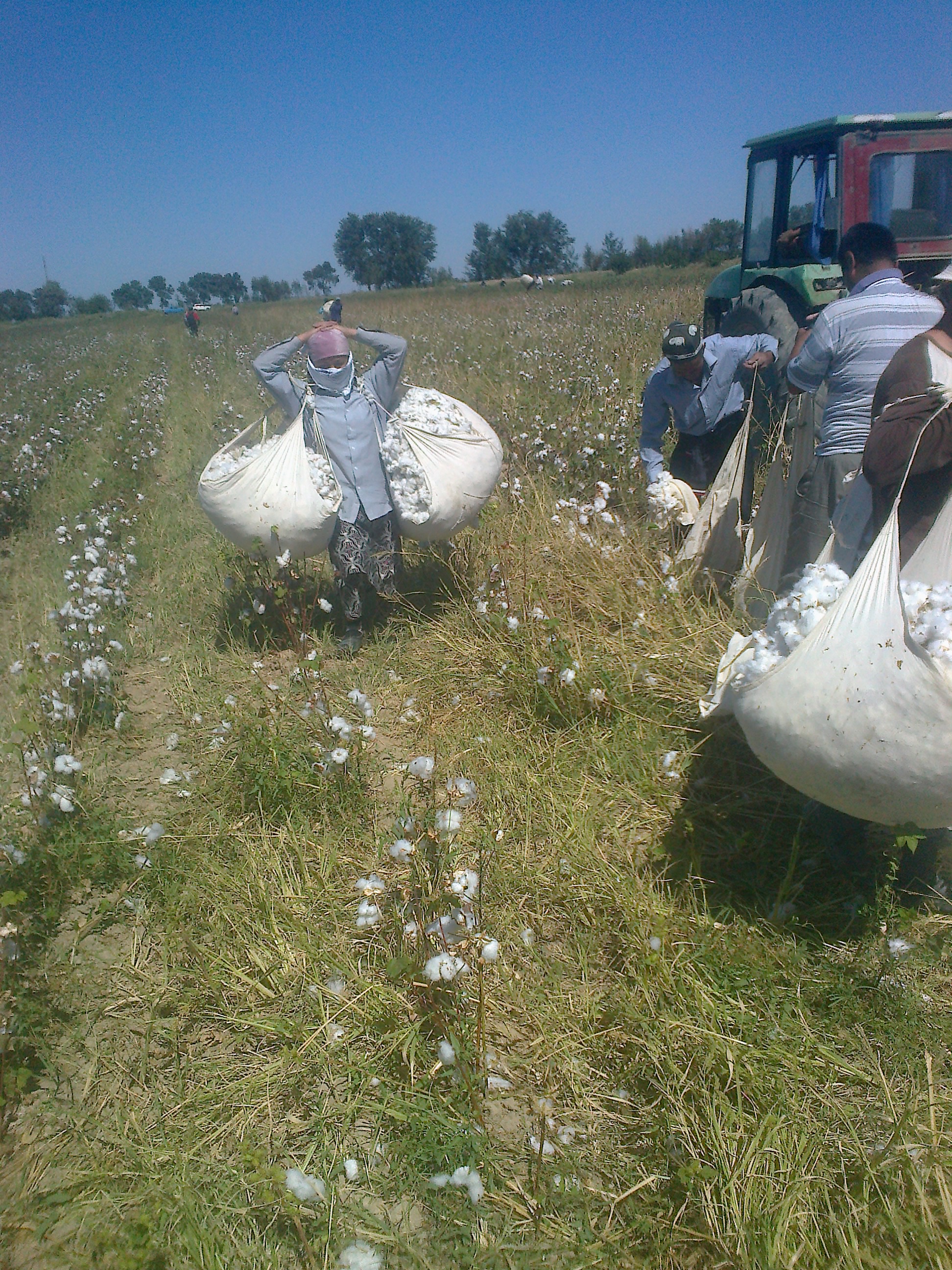 The government of Uzbekistan has begun preparations for the 2015 cotton harvest. In at least two regions, the government appears to be using local organizations with close links to the government to support the mobilization of cotton pickers for the harvest.

In Syrdarya region, an appeal under the names of the Charity Foundation Mahalla, Nuroniy Foundation, and youth-focused organization Kamolot was circulated that called on residents to work for the president and pick cotton:

“Our people traditionally consider such work to be an honourable occupation. Therefore, those who are able to work and who consider themselves part of our society must not stay away from this worthy cause, and from the beginning of the cotton harvest must go to the cotton fields. During the harvest, everyone should consider oneself a cotton picker. This is the way to prove our patriotism and devotion to our homeland. We can thus show our esteemed president that we are hardworking, honest people with an open heart.”

Residents of Syrdarya reported that the neighbourhood committees, known as mahallas, asked them to sign a document stating that they agree to take part in the upcoming harvest.

In the Jizzak region, Prime Minister Shavkat Mirziyoyev visited to check on the status of cotton production, on August 15, 2015.

In advance of his visit, regional officials ordered public-sector institutions to prepare the area, and administrators of schools and medical institutions, in particular, sent their employees to clean the highways and roads. On the day of the visit, school administrators organized teachers to stand in the cotton fields along the Prime Minister’s route and pretend to pick cotton with joy and enthusiasm. The teachers remained in the fields from 9 AM until 2 PM.

Following the Prime Minister’s visit, Jizzak’s regional governor (hokim) Saifuddin Ismoilov convened a meeting with officials and farmers in the region. The governor told them that people from Tashkent will not be brought to harvest cotton this year; instead, each farm will need to recruit workers. He added that farmers will be expected to assign 2 hectares to each cotton picker and provide his office with copies of passports for each picker. Farmers reacted to the meeting reporting that they have heard similar statements in previous years, and people were nevertheless sent from Tashkent to their farms.

In Uzbekistan, local officials destroyed farmers’ crops to force them to plant cotton instead of vegetables

Farmers from the Shahrisabz district of Kashkadarya region reported to Radio Ozodlik that the head of the district administration Fakhriddin Norov and district prosecutor Sherali Ashirov ordered the destruction of crops on several hectares of farmland during the last week of July.

According to one of the farmers, Azamat Azimov, the prosecutor sent a tractor to destroy his ripening corn and tomato crops.

“I planted corn on two hectares and tomatoes on one. The tomatoes had already grown, but the corn was not ripe yet; it needed another 10-15 days. The prosecutor destroyed the entire crop. They allowed us to plant it, and now they destroyed it. The prosecutor told me that he destroyed it because I had planted less cotton this year,” said Mr. Azimov.

The farmer tried to resist the destruction of his crops but was met with insults and a beating.

“As I arrived at my field, I heard the prosecutor order ‘clear it!’ I told him, ‘But wait, I have a contract for the corn and spent all the money.’ In response, the prosecutor began insulting and beating me,” reported Mr. Azimov.

Another farmer, who requested anonymity, reported the district prosecutor ordered the destruction of his corn crop as well. This farmer was able to collect a tiny portion of ripened corn from more than a hectare planted.

An employee of the district government, who requested anonymity, confirmed the farmers’ reports of destroyed crops and added that the district prosecutor Ashirov often insulted and beat farmers during public meetings at the district administration office (hokimiyat).

Radio Ozodlik called Mr. Ashirov by telephone, and he did not deny the destruction of the local farmers’ land but claimed that he had nothing to do with it. He asked Ozodlik to call back at another time but did not answer subsequent calls.

The head of the district, Mr. Norov, told Ozodlik that he would only communicate with radio reporters face-to-face in his office, and then hung up the phone.

The chairman of the Shahrisabz district Farmers Association, Qodirov Odil, told Ozodlik that he was unaware of any problems of local farmers.

In Tashkent, government officials withheld a portion of medical workers’ salaries as a fee for cotton even though this year’s crop is not ripe much less harvested, according to the Human Rights Alliance of Uzbekistan (HRAU).

The wife of the human rights activist and HRAU member Abdurazak Sodikov is a nurse in Almazar district, Tashkent region. Mr. Sodikov reported that for three months straight her salary was docked 30,000 soums ($11.70 at the official exchange rate, $6.50 at the black market rate) as payment for cotton, based on harvest plans to be carried out in autumn. Doctors were charged twice as much, 60,000 soum each month.

The staff of all medical institutions in the Almazar district saw their salaries docked, according to HRAU. It is possible that this method of implementing “the plan” for cotton is used in other areas of Tashkent as well.

“In 2014, Almazar physicians were forced to work during the cotton harvest in a remote district of Jizzak region for several days,” said the head of HRAU Elena Urlaeva. “Abdurazak Sodikov visited his wife then and witnessed the slave labour.”

Fergana recalls that each autumn hundreds of thousands of Uzbek citizens are forced to work in the fields to harvest cotton- they are a strategic resource for the state. Many people, organizations and institutions that are unable or unwilling to fulfill their assigned daily quotas of cotton prefer to pay for exemptions.

Previously, Fergana reported that medical workers in the Buka district of Tashkent region were victims of forced labour earlier this year, to weed and till cotton fields. According to HRAU, the head of the Buka district administration (hokimiyat), Mr. Ibrohimov, forced doctors and teachers to weed cotton fields from April until July 19. Only after several workers fainted, suffering from extreme heat and poor quality water, he stopped sending medical workers to the fields.

Ms. Urlaeva filed a complaint against Mr. Ibrohimov, but the district head refused to accept it. Another official, E. Yusupov shouted at the HRAU leader and said human rights defenders are involved in illegal activities and revealed state secrets.

In response, Ms. Urlaeva staged a picket outside the hokimiyat, demanding the district head accept her complaint. Police officers immediately surrounded her. Through negotiations, Mr. Yusupov accepted Urlaeva’s complaint but told her that she would receive no response from the district or Prime Minister Mirziyoyev.

Following previous reports of officials docking the salary of medical workers for cotton, officials have persecuted the nurse who blew the whistle on the practice.

Local officials threatened Saodat Sodikova, a nurse at a medical clinic in Almazar district of Tashkent, according to a statement issued by the Human Rights Alliance of Uzbekistan (HRAU). On August 13, Ms. Sodikova was summoned to pass a certification test at the Tashkent Pediatric Medical Institute and told that she would be fired if she did not pass. Sodikova fears that the clinic administration is trying to get rid of her after she disclosed information about the upcoming cotton harvest.

The nurse told human rights activists that her salary was docked 30,000 soums for three months in a row to pay for cotton that has not yet been harvested. According to HRAU, all the medical institutions in Almazar district dock their employees’ salaries for cotton. Nurses are charged 30,000 soum and doctors 60,000 soum.

The human rights activists filed a complaint alleging illegal extortion to the prosecutor, but instead of investigating the district administration arranged the persecution of Ms. Sodikova. Several times administrators summoned her for interrogations, asking her why she disclosed “state secrets” about the collection of money for the “cotton fund,” a practice conducted annually. During the interrogations, they threatened her with dismissal.

Now, HRAU activists are distributing pamphlets entitled, “What to do if you are forced to pick cotton.” They intend to inform doctors, teachers, and other citizens that such forms of labour and extortion are illegal.

During the annual cotton harvest in Uzbekistan, hundreds of thousands of citizens are involved whose actual professions are not related to agriculture. Currently, there is no mass use of child labour in the cotton fields has been observed; however, adult employees of public institutions are being used for the harvest more.

Chairmen of neighborhood committees known as “mahallas” in Uzbekistan reported that the government ordered them to contribute persons to pick cotton in 2014. The local leaders, traditionally respected as elders of their communities, reported the practice to the Initiative Group of Independent Human Rights Defenders of Uzbekistan (IGIHRDU).

The mahalla committees’ chairmen approached the IGIHRDU this summer to report on the practices of Bahodir Goibnazarova, Senator in the national parliament of Uzbekistan (“Oliy Majlis”) and the mayor (“hokim”) of the Almazar district of Tashkent region.

According to the chairmen, during the 2014 cotton harvest, Mr. Goibnazarova ordered them to mobilize five people to pick cotton every 10 days or to pay 400,000 soum per cotton picker. Mr. Goibnazarova then assigned two persons from each shift to work as a janitor at the district government office, known as the hokimiyat. Goibnazarova reportedly enforced the orders with verbal and physical abuse, despite the elderly age of the chairmen.

Police in Uzbekistan assaulted Elena Urlaeva, head of the Human Rights Allliance of Uzbekistan, at the “Buyuk Ipak Yuli” metro station in Tashkent on August 16, 2015. The police officer kicked her leg, took her camera, and called for back-up from other policemen.

The police arrested Urlaeva and took her to the police station in Mirzo Ulugbekskogo district. In room No. 28 police officer Ilyas Mustafayev searched her belongings and confiscated 200 pamphlets that explain Uzbek laws prohibiting forced labour, published by the Uzbek-German Forum for Human Rights.

Ms. Urlaeva suffered severe pain in her leg, where the police officer kicked her. After 7 hours in detention, she asked the police to call an ambulance. Ms. Urlaeva was suffering from high blood pressure and felt chest pain.

The police did not call an ambulance. Ms. Urlaeva’s husband arrived at the police station at 5 PM and took her to the Traumatology Institute, where doctors treated her leg. Instead of investigating the assault of Ms. Urlaeva, the Mirzo Ulugbek police department sent officers to her home that evening, where they demanded her husband provide a false testimony explaining the cause of her injuries.

Ms. Urlaeva plans to protest outside the National Security Service, the police, building and demand the return of the 200 pamphlets confiscated from her.