Cotton 2018: “Women and men are sleeping in the same room, divided only by a curtain” 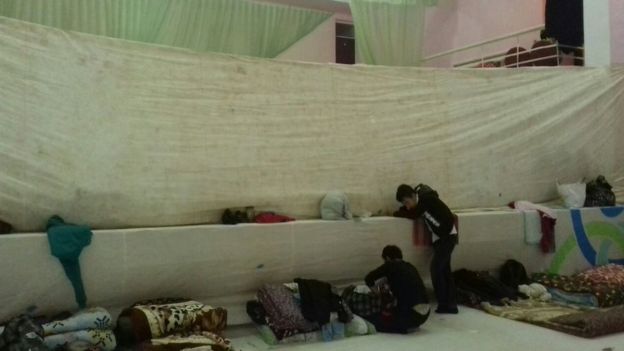 105 workers from cultural institutions in the Jizzakh region are collecting cotton in a “voluntary-compulsory” way (Soviet term for social work that cannot be refused).

Men and women have to share living quarters and are publicly reprimanded if they pick less than 70 kg of cotton per day.

Employees of theaters, museums, libraries as well as musicians are picking cotton in the Pakhtakor district. They are accommodated in the main hall of the Palace of Culture.

The participation of workers from cultural institutions in the cotton harvest was confirmed to the BBC by Kamol Farhadov, the head of the Department of Culture of the Jizzakh region.

“I personally housed them in the Palace of Culture. 105 people were accommodated there. The hall was divided by a white curtain with women on one side. We cook for them twice a day. God willing, we will fulfill the quota. Before lunch, we pick three tons of cotton. After lunch we have to see how much has been picked”, said Kamal Farhadov.

According to a document received by the BBC, the involvement of the head of the department of culture of the Jizzakh region in the cotton harvest followed a decision taken at a meeting of the Council of Ministers.

“Following the minutes of the meeting of the Council of Ministers of the Republic of Uzbekistan dated September 10, 2018, entitled ‘Measures for timely, high-quality cotton harvest without losses’, we ask you to submit a list of employees for voluntary participation in the cotton harvest by September 15, 2018,” states the document which was signed by Kamol Farhadov.

According to BBC’s source, employees are having to pick cotton not voluntarily, but because they are ordered to by their managers.

“Employees who have not picked 70 kg of cotton are abused and humiliated in the evening in front of the others. Those who have picked little cotton are forced to do hard work such as chopping firewood. How can those whose work it is to play musical instruments collect 70 kg of cotton a day?” the source asked.