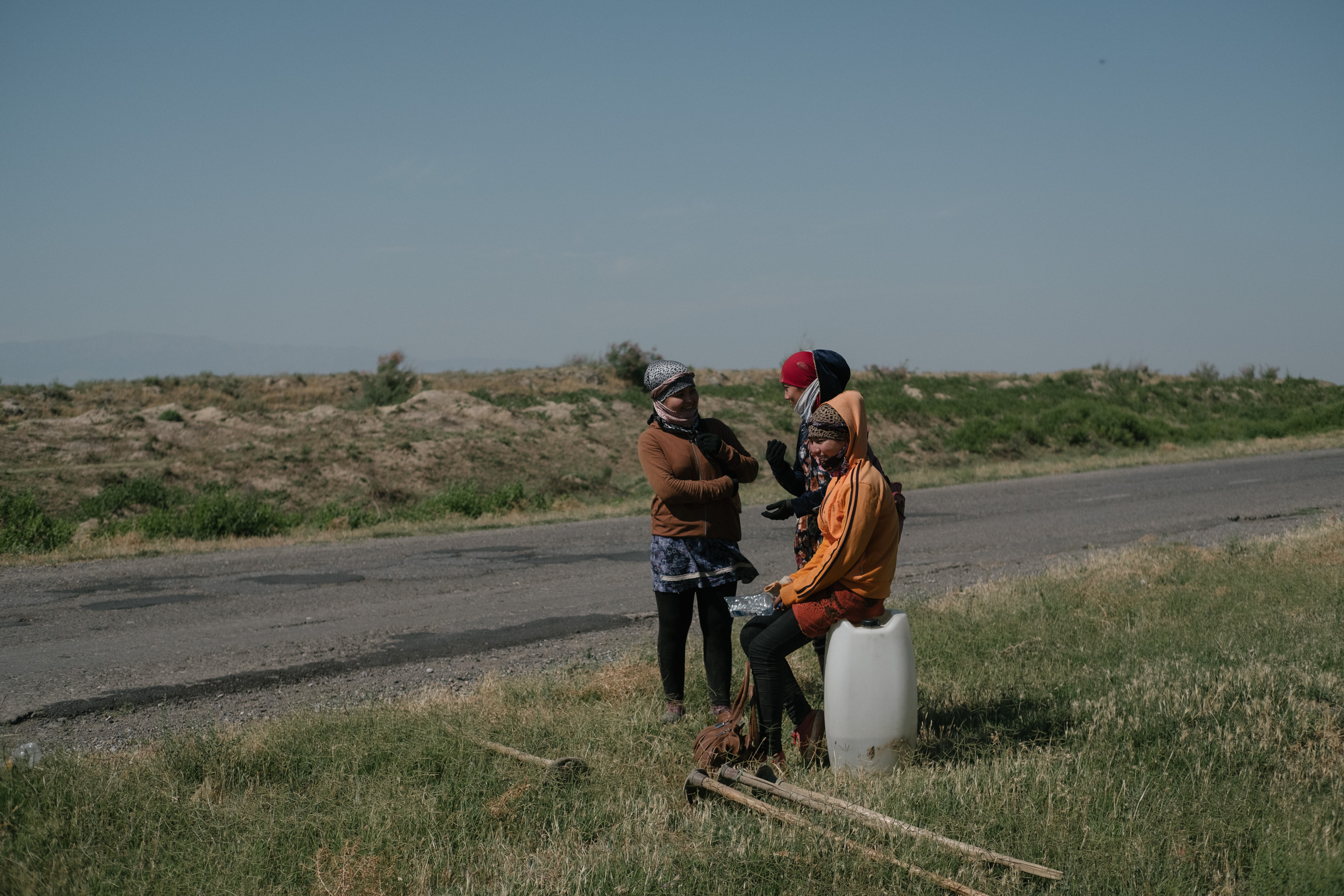 In April 2016 the khokim (governor) of the Khazarasp district in the Khorezm region ordered the confiscation of farmer Allabergen Ruzimov’s land. His land was taken away without any reason and in defiance of the law. The farmer suspects that the real reason for the confiscation is due to the fact that last fall, during the peak cotton season, he was hiding the human rights activists Elena Urlaeva and Malokhat Eshonkulova in his house. They had come from Tashkent to conduct monitoring of forced labor in the Khorezm region’s cotton fields.

The monitoring provided irrefutable evidence that Uktam Kurbanov, the hokim of the Khararasp district (Khorezm region), had been personally forcing the employees of state run institutions to pick cotton.

The translated transcript of the audio recording of the meeting which took place in Khokimiyat in September 2015 can be found here:

Not only is Uktam Kurbanov still in office as governor of the Khazarasp District, but he has still not been held to account for violating the laws prohibiting forced labor either. Instead, Kurbanov has been punishing the farmer who helped human rights defenders expose violations of labor laws.

The Uzbek German Forum for Human Rights calls on the ILO to raise the issue of the illegal land confiscation from Allabergen Ruzimov before the Uzbek authorities and clearly condemn the punishment inflicted on those who monitor labor rights.

Question: Can you please introduce yourself and tell us what problems you have experienced?

Allabergen Ruzimov: I am Allabergen Ruzimov, a farmer living in the Khorezm region’s district of Xazarasp in the rural council of Sanoat. In 2015, I proposed to my 25-year-old relative Eshimbay Urinov to lease land for 49 years for the cultivation of cotton and wheat. This would have saved him from going to Russia in search for a job and possibly ending up in slavery. Since I happen to be very experienced in farming, I promised that I would help him out with everything. However, since I am an old man, it was difficult for me, after the work in the field, to attend the compulsory meetings in Khokimiyat, which took place on a daily basis in the evenings.

That is why the required land lease documents bore my relative’s name, Eshimbay Urinov. On March 25th, 2015 the hokim signed a decree regulating the land lease for 49 years for the purpose of cotton farming.

In 2015, all the land was planted with cotton. According to the agreement, we should have delivered 73 tons of cotton. By the end of the harvest, we exceeded the quota and handed over 80 tons of cotton.
However, this year the land has been unexpectedly taken away from us.

Question: Who issued the order to terminate the land lease?

Allabergen Ruzimov: On April 30th, 2016 the hokim of Xazarasp of the Uktam Kurbanov district issued an order declaring the termination of the land lease. The order was however in clear violation of the Uzbek Land Code, which states in article 36, paragraph 7, that the land can only be taken away if the crop quota has not been reached within three years. We started our farm just a year ago, and we have already exceeded the quota. Nevertheless, we received the order of terminating the lease by post.

Question: Have you ever received any warning that your land would be taken away before receiving this order?

Allabergen Ruzimov: We were informed about it in April 2016. Throughout the whole winter, four-families worked in the fields to prepare the land for planting cotton. During the fall of 2015, we sowed wheat and invested in seeds and fertilizers, but now our harvest is in somebody else’s hands.

In April 2016, following the order of the hokim Uktam Kurbanov, the chairman of the mahalla (urban division in Uzbek communities)(1) Zafar Atajanov, drove us off our farming fields.

Question: Why did they take your land away even though you had fulfilled your duties?
Allabergen Ruzimov: I believe that the reason for the confiscation is related to the visit of the two human rights activists, Yelena Urlayeva and Malokhat Eshonkulova, in September 2015. They exposed the despotism of the hokim Uktam Kurbanov, whom the farmers had complained about, and reported that he used to beat farmers and doctors and force people to pick cotton during the night. It may be possible that the khokim thought that it was me who called the human rights defenders, especially because the surveillance documented that they were hiding in my and in my sister’s house. That’s why we were punished.

Question: Have you already concluded an agreement concerning the cotton production?

Allabergen Ruzimov: We concluded a contract for 2016 with the ginning factory for the production of 78 tons of cotton. This is a tripartite agreement, where the Department of Justice of the Khorezm region acts as third party. The contract with the ginning factory was also signed by Shukhrat Shomuradov, the first deputy of Agricultural Policy of the khokimiyat in the Harazasp district.

Q: And whom was your land given to?

Allabergen Ruzimov: Our land was given over to a relative of the hokim, who lives in another district. Our children are now starving. Four large families, who worked in the fields and prepared the ground for the cotton production became unemployed. Both my cousin and the manager of the farm, Eshimbay Urinov, blame me for what happened. We paid heavy costs and lost our land.

Question: Are you going to appeal against the hokim’s dicision?

Allabergen Ruzimov: I sent a complaint and a telegram to the Prosecutor General and the President of Uzbekistan and I appealed to human rights activists as well. Now I am also determined to go to court.