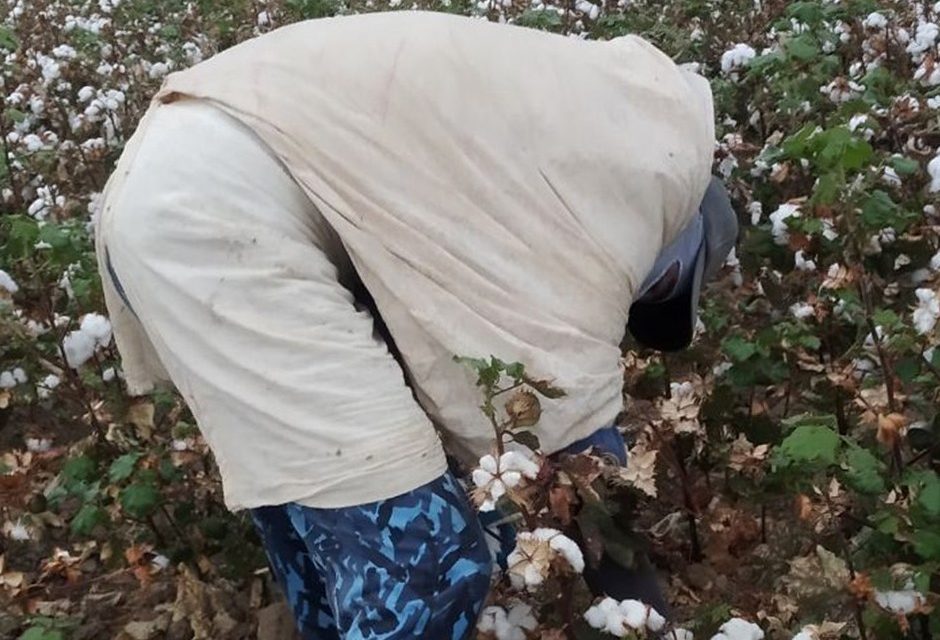 The government of Uzbekistan began a mass forced mobilization to weed cotton fields on May 10. Authorities of the central government in Tashkent ordered regional and local authorities throughout the country to organize field workers in their territories. The government has forced teachers, medical workers, and other public-sector workers as well as university students and children to toil in the cotton fields throughout the country.

For this report, the Uzbek-German Forum for Human Rights (UGF) monitored labor practices in six regions of Uzbekistan throughout the spring. UGF monitors received extensive training on research methodology by an expert in labor law. Throughout the spring, they visited the cotton fields, photographed the mobilization of citizens to the cotton fields and have conducted 30 interviews in different locations with representatives of different professions and organizations.

UGF monitors observed the Uzbek government implement a similar forced labor scheme in all regions in May 2015. Authorities assigned specific cotton fields to each organization, with the orders to clear weeds and prep the field for cotton cultivation. Administrators of each institution either sent its own employees or collected money from its employees to hire outside workers to clear the assigned fields.

This spring, weeding the cotton fields has been conducted largely by people who are not farmers or farmworkers. The teachers, nurses and other public-sector workers forced to work did so out of fear of losing their jobs. They did not receive payment for the 8-hour days weeding the cotton fields but continued to receive their salaries as public-sector workers. Meanwhile, employees who remained at the public-sector institutions were forced to take on double workloads with no additional compensation.

Farmers explained that they could not have paid the workers even if they were allowed to do so. They cannot withdraw cash from their bank accounts, which are controlled by the Finance Ministry, and many are unable to hire workers due to the debts incurred to fulfill their state-assigned annual cotton quotas.

Citizens interviewed by UGF expressed despair at the situation. Fear of losing their jobs motivates them to obey orders, and they see the cotton work as a political issue, not to be resisted.

Some public-sector workers, therefore, preferred to pay instead of work in the fields. On average, administrators charged 20,000 soum per day, depending on the location in the country. For example, an employee of the state-owned Almalyk Mining and Metallurgical Combine (AMMC) reported that each worker contributed 3,000 – 5,000 sum in order to remain working at the factory.

Administrators planned their staff’s participation. Most schools sent technical staff and teachers that have fewer classes to teach. Hospitals sent staff primarily on the weekends. The administrators sent citizens to clear the cotton fields of weeds in shifts, averaging 10-15 days for each employee. The public-sector workers who paid instead of doing fieldwork were required to perform their normal jobs. While the government transported public-sector workers to the fields each day on buses, the authorities sent students to stay near the cotton fields.

Use of the school system to forcibly mobilize field workers negatively impacted student’s right to education. May is the time for final exams and assessments, yet the authorities sent teachers and students to the cotton fields throughout the month. For example, a college in Angren, Tashkent region sent 50 employees to work on its assigned 12 hectares of land.

Authorities forcibly mobilized children to weed cotton fields in the Zarbdor district of the Jizzakh region, starting in mid-May. School No. 25 sent 9th-grade students (ages 14-16) to clear the fields, on orders from the head of the district office of the Education Ministry, Bakhtiyor Elmuradova.

The community is not grieving the loss of 15-year old Ulugbek Iskhakov, a member of school No. 25’s 9th-grade class. The school sent 25 students, including Ulugbek, to work on the farm “Rakhmon Niyati” on May 19. The students swam in canal No. 2, the main irrigation canal, during lunchtime. After Ulugbek began to drown, his classmates pulled him from the water, and he was taken to the hospital. He died shortly thereafter.

The Office of the Prosecutor General has since opened a criminal case and arrested the director and the 9th-grade class teacher of the school. Radio Ozodlik tried to contact Mr. Elmuradov, head of the Zarbdor district office of the Education Ministry, but he refused to comment on the events and fatal accident. Another staff person at the school confirmed the course of events to Radio Ozodlik and added that local authorities have ordered school staff and the child’s mother to not speak about the incident to anyone.

Since the loss of Ulugbek, authorities in Zarbdor district have not sent students to weed the cotton fields again this spring.

Karakalpakstan: Officials send nearly half of its teachers and hospital staff to clear cotton fields.

Authorities forced nearly half of all college teachers, the staff of the Central Hospital in Huzhayli district and university students to clear the cotton fields of weeds. The mass mobilization began May 12.

College administrators sent up to 50% of all teachers to conduct the fieldwork, in 15-day shifts. For example, colleges in Nukus sent the first shifts of teachers on May 12, and 15 days later another group replaced them. After receiving orders to send 100 people to weed the cotton fields, the Nukus College of Art and Culture sent 91 teachers. The college administrators gave teachers the option of paying 300,000 soum ($60) for an exemption from the fieldwork.

The Medical College of Huzhayli district sent 60% of its employees to weed the cotton fields, in 10-day shifts. Its administrators also charged 20,000 soum per day ($4) for an exemption from the fieldwork.

The State Pedagogical University in Nukus sent 30 students to work in the cotton fields this spring. The students worked on the farm “Berdak” and slept overnight in the homes of residents near the farm.

The government ordered hospitals and medical clinics to contribute to the fieldwork in May as well. The City Hospital Tuberculosis Center in Nukus sent 50% of its staff to weed the cotton fields. Administrators offered exemptions from the fieldwork for 30,000 soum per day ($6). The administrators of the Beruniy city sanitary and epidemiological station sent employees to the cotton fields every day starting May 12. The Central Hospital in Huzhayli district sent nearly half of its staff to the fields throughout the month, and its administrators charged 10,000 soum per day ($2).

Colleges and universities in Kashkadarya sent their staff and students to pull weeds from the cotton fields. The authorities in Kasan district sent college teachers to work in the cotton fields starting May 7. The teachers reported that they were organized into groups of 10-15 teachers each day, and each teacher worked in the fields 1-2 days per week. Administrators of the medical colleges of Shakhrisabz sent students and teachers to the fields starting May 12, and they worked each day until lunchtime. The State University of Karshi sent its students to the cotton fields beginning May 18.

The authorities in Kattakurgan district, Samarkand region forced teachers from the secondary schools and colleges to pull weeds from the cotton fields starting May 5. Teachers from a secondary school in the district reported that each school was ordered to send 15 teachers each day to the cotton fields. “We were warned that those who will not work (weeding) will be dismissed,” said the teacher in an interview with Radio Ozodlik.

The authorities in the Tashkent region forcibly mobilized public-sector workers from schools, medical clinics and state-owned enterprises to pull weeds from the cotton fields this May.

Administrators of school No. 1 in Buki ordered 10-12 employees to work in the cotton fields each day. The school maintenance staff bore the brunt of the burden. Instead of working at the schools, the school staff reported to the city administration office (hokimiyat), from which they were sent to the fields on buses.

Authorities in Buka district mobilized college teachers to the cotton fields starting May 11. The college administrators ordered staff to the fields in shifts of 10 persons, leaving only 30 staff in the classrooms. The teachers reported each morning to the city administration office (hokimiyat) and worked in the cotton fields until 17:00.

In Almalyk city, the principle of school No. 19 Kodirova S. ordered the teachers to clear the cotton fields in the Pskentky area, starting May 12. The principle sent 8 of the total 60 teachers to the fields each day and offered exemptions from the fieldwork for 20,000 sums per day ($4).

The Chirchik city mayor (hokim) Furkat Hamidullaeva ordered public sector workers to report to the city administration office (hokimiyat) on May 12, to be transported to the cotton fields. On May 21, school teachers from schools № 10, №5, № 12, № 23 and №8, college teachers and medical workers were all required to again report for fieldwork. The teachers reported they obliged the city’s orders for fear of losing their jobs.

The government assigned 20 hectares of cotton fields for clearing to the Sanitary-Epidemiological Station (SES) of the city of Angren.  Nearly the entire SES staff of 250 people opted to pay 15,000 sums ($3) for exemptions instead of pulling weeds from the cotton fields. According to one of the SES employees, the national head of the SES ordered all SES facilities in the country to contribute to the cotton weeding this May.

Administrators of the medical clinics of Angren city announced orders to pull weeds from the cotton fields at a general meeting on May 10. The city mayor (hakim) and head physicians of the clinics attended, and a personal acquaintance of the mayor delivered the announcement. They informed the medical workers of the clinics that they were required to work 10-day shifts or contribute 10,000 soum ($2). Nearly everyone paid for the exemption.

The administrators of the central medical clinic in Buka ordered workers to the cotton fields on May 10, adding that refusal would lead to dismissal from their jobs. Fearing the loss of their jobs, the medical workers showed up at 7 in the morning at the district government office (hokimiyat), and from there the authorities sent them on buses to the cotton fields. The medical workers cleared weeds from the fields until the evening, when buses took them back to Buka. Of the clinic’s staff of 120 employees, only 50 remained to run the clinic. Similarly, the children’s medical clinic sent 30 of its 40 total employees to the cotton fields this May.

The administrators of an oil storage facility required its entire workforce of 700 to contribute. Only 10 staff pulled weeds from the cotton fields. The rest paid 10,000 sums each ($2) for exemptions from the fieldwork.