Bobomurod is free, but found guilty … 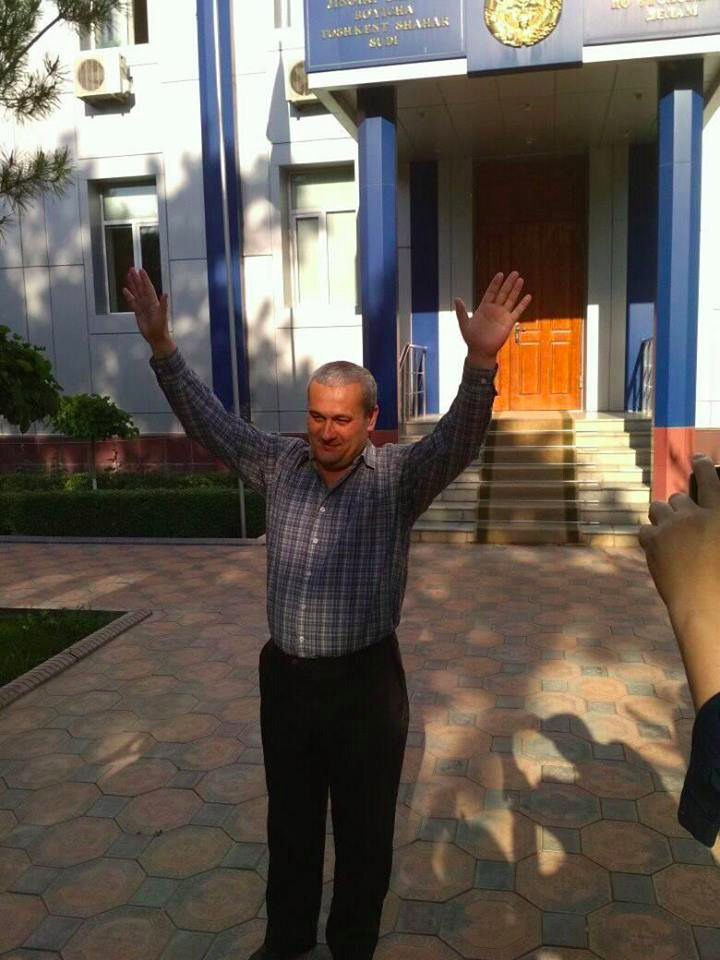 Nasreddinov, Ollojorov, and Salayev have been completely vindicated and the criminal charges against them have been dropped.

Abdullayev however, was found guilty under Article 159 (1) of the Criminal Code of Uzbekistan* and was sentenced to three years of correctional labor (instead of five years of imprisonment requested by the prosecution) with a retention of 20% of his salary.

During the last 60 days, active users of Uzbekistan’s social media watched the dramatic proceedings in the case of an alleged  “coup d’etat”, led by Abdullayev.

Journalists, international observers, and friends of Abdullayev listened to his heartbreaking account of his suffering at the National Security Service’s (SNB) detention facility.

As soon as the indictment named “Zhatva” [“Harvest”] was read out, in which Abdullayev allegedly planned to overthrow the state, it became clear that it had been fabricated.

Last year in September, when Bobomurod Abdullayev was detained by SNB officers, they apparently believed that they were above the law.

The group of investigators, led by Nodir Turaqulov, did not even bother to find any substantive evidence for the indictment.

Unexpectedly, the trial was held openly. The judge, Zafar Nurmatov, demonstrated a degree of impartiality, while lawyer Sergei Mayorov, a knowledgeable expert on the subject, used all available legal instruments to defend Abdullayev.

Finally, Abdullayev was free to leave the courtroom. Now that the initial excitement at the outcome has passed, the time has come to consider that the journalist was accused of crimes that he had never committed.

No encroachment upon the existing constitutional order was carried out by Bobomurod Abdullayev. As his lawyer, Sergey Mayorov said: “He does not deserve any kind of punishment.”

The fact that Abdullayev was sentenced to one-and-a-half years of suspended punishment, during which time 20 percent will be deducted from his income, and not to 20 years of imprisonment as had been expected, was seen as a compromising ruling of the Uzbek court system.

Besides that, the court also passed a ruling to destroy his computers. During the next one-and-a-half years he will also have to undergo registration with the police.

However, who will compensate for the suffering, torture and humiliation caused to Abdullayev by the SNB officers during the last six months?

Abdullayev’s release is very important for his family and friends, but it is more important that the court system in Uzbekistan should issue legal rulings instead of compromising ones.

*(“Public calls for unconstitutional change of the existing state system, seizure of power or removal from power of legally elected or appointed representatives of power or to unconstitutional violation of the unity of the territory of the Republic of Uzbekistan, the purpose of distribution or distribution of materials of the same content committed by an organized group or in its interests”)

The case of Bobomurod Abdullayev

Abdullayev was detained on September 27, 2018, by officers of Uzbekistan’s National Security Service, known as the “SNB”, on charges of “conspiracy to overthrow the constitutional regime” (Article 159(4) of Uzbekistan’s Criminal Code), which carries up to 20 years in prison. The charges against Bobomurod refer to an operation named ‘Zhatva’ (Harvest) to seize the country, in which Bobomurod was allegedly preparing ‘great masses to stage a coup in four large cities in Uzbekistan’. His relatives told representatives of several human rights groups on February 3, 2018, that he had been tortured and ill-treated since his detention.

Abdullayev states that on September 27, 2017, four SNB officers approached him near his home in Tashkent without explaining that they intended to arrest him or showing any identification. As they approached he asked, “What happened?” and began to resist. The men then put a bag over his head, beat him, and bundled him into a car. Abdullayev said that nearby residents witnessed the abduction.

He was then brought to a place resembling a basement and handcuffed to the wall. Abdullayev said that in the days after his arrest he was kept naked in a freezing jail cell and forced to remain standing. He said he was given nothing to eat for five days and was only given food after he collapsed from exhaustion. According to Abdullayev, the SNB officers denied him food on several occasions and threatened to destroy him and his family. During the trial, Abdullayev said he was beaten with computer cables, clubs, plastic pipes, and repeatedly tied for several hours at a time to a bed in his cell for several hours at a time. Abdullayev told the court that the men beating him kept his right hand intact so that he would be able to sign his “confession”, while his back was beaten with a club and his left hand was left bleeding. When he blacked out, they poured cold water over him and continued beating him.

He was forced to write about his connections with other defendants and in particular about the leader of the Uzbek opposition group, Muhammad Salih. Abdullayev was forced to write that Salih threatened him and made him write the articles. If Abdullayev refused to do so, he was hit on the head by his torturers. Afterward, Abdullayev was transferred to another room where Nodir Turakulov, an SNB investigator, poked him in the eye with a blunt instrument and then started beating and insulting him.

Abdullayev said that a forensic examiner took pictures of his back which showed clear traces of torture, but those photos are not in the case files. Officially, the forensic examination has established that there is a scar on his left hand but that it is impossible to determine when it was sustained. The journalist’s defender, Sergei Mayorov, said that such a claim is not surprising given that the “consequences of admitting torture are catastrophic for the state”. “One would have to prosecute not only the torturers but their accomplices as well, and that means half of the SNB staff and the entire SNB management. Who would do that? No one,” he added.

According to Abdullayev, the SNB investigators said that if he did not admit to everything that he was charged with, he would be a dead man. “It turns out that I will remain in custody throughout the entire trial. They said that if I did not admit to all the charges, I would not get out of there alive,” Bobomurod told his mother. He added that every time any details about him were disclosed, he was tortured.

Even although Bobomurod did not tell his family how brutally he was being treated during the entire investigative process, it was clear that he was being subjected to torture when at first, he “voluntarily” refused the services of one of the best Tashkent lawyers, Sergei Mayorov. Bobomurod, therefore, remained without legal assistance, with his family receiving no communications from a state-appointed lawyer. According to the BBC, Bobomurod Abdullayev’s mother, Gavkharzhon Madaminova, said that when she asked her son why he had refused the services of Mayorov, he replied that he had been forced to. Mayorov has managed to see Abdullayev twice after his arrest and who actually tried to help Abdullayev. However, his efforts were unsuccessful as investigators ignored the lawyer’s demands and refused to disclose the course of the investigative process, as well as the allegations against Abdullayev. “Indeed, Article 52 of the Criminal Procedure Code was violated since I didn’t have an opportunity to speak to my client in private.”

The investigation against Abdullayev lasted five months. According to his lawyer, Abdullayev’s testimonies during the trial are totally different from those in the case files. During his trial on March 26, 2018,  Abdullayev stated that SNB investigators openly claimed that the anti-state operation “Zhatva” was designed from within the SNB.

Photo: Bobomurod Abdullayev shortly after his release,  May 7, 2018