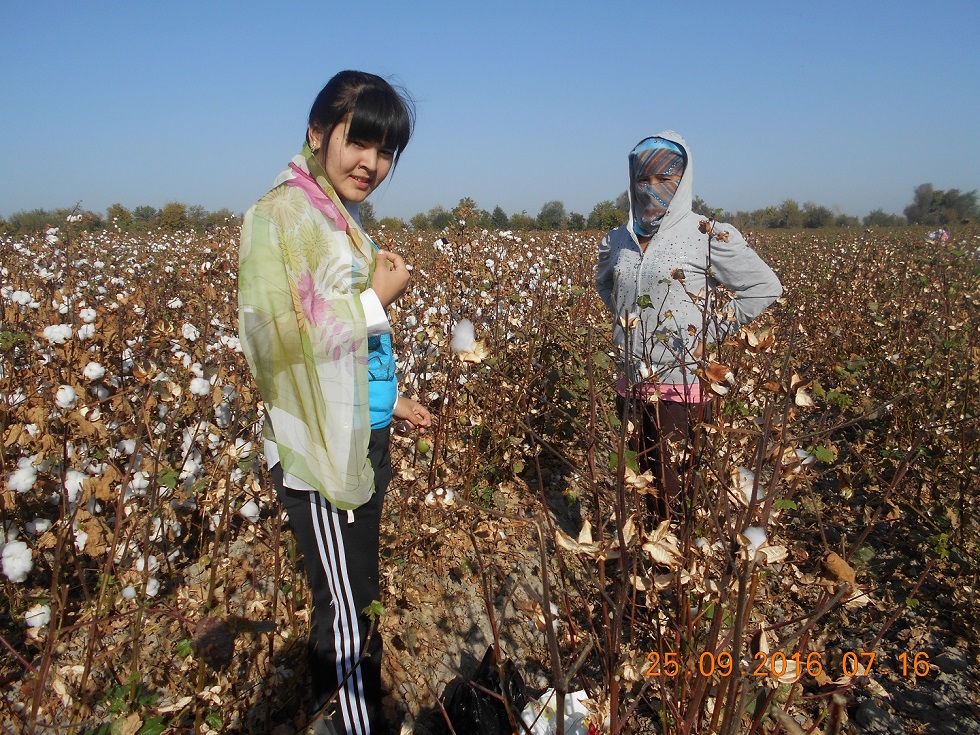 Memorandum to the European Parliament

The Uzbek government once again used forced labor in the cotton sector systematically on a massive scale, and across the country in 2013, affecting hundreds of thousands of children aged 15-17 and adults. While children younger than 15 were not mobilized on a mass scale in 2013, authorities forced children aged 15-17, studying at colleges and lyceums, to abandon their studies and harvest cotton in every region of the country, for periods up two and a half months. The authorities forced teachers from institutions at every educational level to pick cotton, thereby disrupting studies for many children, even those who were not sent to the cotton fields themselves.

Uzbekistan has an atrocious human rights record, with entrenched human rights violations limiting a wide range of fundamental human rights. Torture is systematic. Courts are not independent. Violations of due process and other protections are endemic in the criminal justice system. Uzbekistan severely and unduly restricts the freedoms of religion, speech, assembly, and association. The government has only granted registration to one independent human rights organization. Journalists, civil society activists, and human rights defenders are subjected to harassment, surveillance, and interference in their work, and in some cases imprisonment, ill-treatment, or torture (1).

The government of Uzbekistan also has a long-standing record of non-cooperation with independent international monitoring and investigation mechanisms and regularly rejects or fails to comply with recommendations made by international bodies. As of 2014, Uzbekistan had failed to respond to outstanding invitations by 11 United Nations special human rights monitors.

During the 2013 cotton harvest, the International Labor Organization (ILO) for the first time monitored the application of ILO Convention No. 182 on the Worst Forms of Child Labor. The ILO’s stated goal was to subsequently develop “a comprehensive national cooperation program in collaboration with the Sub-Regional Office and Decent Work Team covering Eastern Europe and Central Asia.” (2)

The ILO’s monitoring mission was not able to undertake a comprehensive assessment of the use of forced labor in Uzbekistan’s cotton sector. The mission’s scope did not include the use of forced adult labor, nor were monitors present during any pre-harvest stages of work such as preparing the fields, planting, and weeding the cotton. Research by the Uzbek-German Forum evinces that children and adults were forcibly mobilized to plough and weed, as in previous years. (3)

There were other crucial methodological limitations under which the ILO monitors observed the 2013 harvest. The ILO did not ensure the participation of the International Trade Union Confederation, the International Organization of Employers, and Uzbek civil society. The monitoring teams all included Uzbek government representatives or representatives of quasi-governmental or government-controlled organizations whose independence and impartiality was far from guaranteed. According to the ILO report, the Local Coordination Council, which was composed entirely of representatives of government agencies, appointed 40 Uzbek local monitors from the Ministry of Labor and Social Protection, the Trade Union Federation including the Women’s committees, the Chamber of Commerce and Industries, and the Farmers’ Association, all of which are government agencies or government-controlled (4). The presence of monitors appointed by government officials and working for a government or government-controlled agencies calls into serious question the independence and impartiality of the Uzbek team members. The government of Uzbekistan undoubtedly had a stake in the outcome of the ILO’s mission and cannot be viewed as impartial. Further, given pervasive, widespread, serious violations of human rights in Uzbekistan, there is a deeply rooted fear of government and government officials. People interviewed by the monitoring teams may not have felt secure in communicating violations that implicate the government out of fear of repercussions. The ILO’s report is silent on whether it recognized this as a possibility and attempted to take any steps to assure respondents or ameliorate issues related to the possibility of bias.

The ILO’s mission was also weakened by efforts of the Uzbek government to undermine monitoring, including transferring students, in particular first-year students, back and forth between their classrooms and the cotton fields to evade discovery by ILO monitors and instructing people to lie to monitors. These practices indicate that the government of Uzbekistan did not participate in the ILO mission as a good-faith partner and, in fact, actively attempted to undermine the ILO’s monitoring.

Despite the limitations under which the ILO observed the harvest, its mission report noted the use of child labor, emphasized concerns about the use of forced labor for the cotton harvest, and recommended that the government take action to implement ILO Convention No. 105. (5)

The Systematic Use of Child Labor in the 2013 Cotton Harvest

In the ILO mission report, the conclusion that “forced child labor has not been used on a systematic basis in Uzbekistan to harvest cotton in 2013” reflected both the goal of the exercise— to build trust towards broader ILO program in Uzbekistan— and the limitations imposed on the ILO monitors. It also contrasts with the evidence presented in the ILO mission report of the use of the state school system to mobilize students to the harvest. For example, the ILO monitors reported that in eight of nine high schools (“colleges”) they visited, classes, were not in session due to cotton picking, and school officials provided no attendance registers or other evidence to support the reasons given to monitors, for example, that students were engaged in extra-curricular activities. (6)

The Uzbek-German Forum carried out research in six oblasts and the capital, Tashkent, and did not identify major regional differences in the system of forced labor. The system of forced labor is highly centralized, with directives coming from the central government and enforced by regional and local administrations. The Uzbek-German Forum interviewed 40 students and 36 teachers at colleges and lyceums.

In 2013, the government made efforts to avoid mobilizing young school children; however, they mobilized students aged 15-18 on a mass scale, suggesting the reduction in forced labor of younger children was a tactic to allay pressure. Although in some regions directives were issued to use only second and third-year students for the harvest, in many cases first-year students were subsequently sent to pick cotton to help schools meet their harvest quotas or to make up for labor shortfalls. The Uzbek-German Forum also documented cases in which first-year students were sent to the cotton fields and brought back earlier than second and third-year students. In some cases, students and teachers reported that the early return was the government’s response to the news that a “foreign delegation” or “inspection,” apparently the ILO monitors, was coming.

The Uzbek-German Forum’s researchers also documented numerous, credible accounts of attempts to manipulate the ILO’s findings by transferring students between the fields and classrooms or instructing them how to respond to questions by ILO teams. Local authorities harassed and intimidate families that did not want to allow their children to pick cotton, including threats to expel students and, in at least one case, bringing the parents before a local prosecutor. Children who are perceived to be bad workers or who failed to meet the daily quotas were berated by teachers, threatened with poor grades or expulsion, and made to perform additional work, such as scrubbing toilets or peeling potatoes. The Uzbek-German Forum documented several cases where students who failed to pick the daily quota were punished by being forced to perform arduous physical activities such as push-ups or running. Researchers also documented at least ten cases of students being hit or beaten to force them to work or as punishment for failure to meet the quota.

[4] ILO report, p. 6. “The Coordination Council consists of representatives from the Ministries of Labour and Social Protection, Education, Foreign Affairs, Internal Affairs, the Women’s Committee, the Center on Human Rights, the Board of Secondary and Vocational Education, the Makhalla Foundation and the ODM Kamelot.”