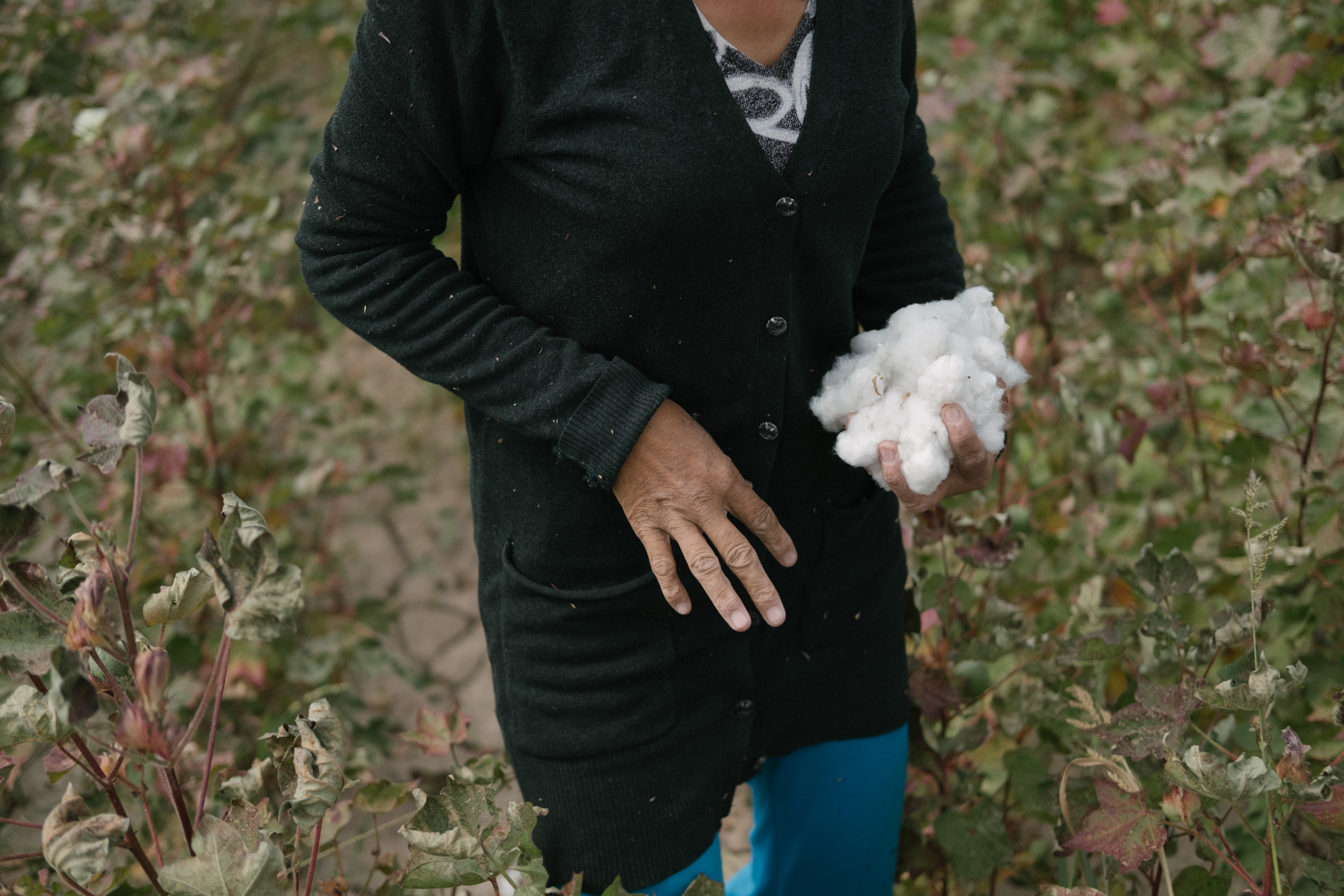 The original article by Paula Dupraz-Dobias published in the SWI Swissinfo.ch

Three years after the death of its authoritarian president Islam Karimov, Uzbekistan’s cotton production remains a sensitive topic among its citizens, many of whom were forced to participate in the annual harvest. A Swiss-backed international programme may help bring back investors after a boycott of Uzbek cotton, but not everyone is sure how much has really changed.

As the annual cotton harvest begins in mid-September, throngs of mostly female workers can be seen crouched over the knee-high plants on huge plantations spread across this otherwise arid country. At 2.5 million labourers, the Uzbek harvest is the biggest recruitment programme anywhere in the world, according to the International Labor Organization (ILO).

Uzbekistan is the world’s seventh-biggest cotton producer. Yet many Uzbeks prefer not to talk about their personal experience in the fields, and several drivers dissuaded us from photographing pickers, saying it was forbidden. In the past, schoolchildren, university students, doctors, teachers and other public sector professionals were required to participate in the harvest for little or no pay and under threat of punishment. Many workers were forced to work far from their homes in other regions of the country.

Since former Uzbek president Islam Karimov died in 2016, his former prime minister and now-successor Shavkat Mirziyoyev has introduced human rights reforms such as freeing political prisoners, shuttering one of the country’s most notorious prisons and reducing the use of forced labour in the cotton harvest. While the government had already begun to end child labour in 2016, the new administration set a pay scale within the quota-based harvest system and established telephone hotlines to report abuses.

In last year’s harvest, 6.8% of workers were forced labourers, according to a report from the International Labor Organizationexternal link that got Swiss supportexternal link in its monitoring of the situation. A year earlier, the UN agency said 13.2% of all pickers involved in the harvest were working involuntarily.

The Cotton Reform Multi Donor Trust Fund was established by the World Bank and co-financed by Switzerland with a donation of $1.5 million (CHF1.48 million). The project, also supported by the European Union and the United States, helps with the governance of Uzbekistan’s reforms, including the annual cotton harvest. Ambassadors representing the three donors convene every six months to discuss progress towards rendering the cotton sector more socially, economically and environmentally sustainable.

“It’s the most beautiful project I have ever seen,” says Olivier Chave, Switzerland’s ambassador to Uzbekistan, adding that it happened because of a “historical coincidence”. If former president Karimov had not passed away to make way for the modern reformist government, Chave says the Cotton Reform project would probably never have achieved the success that it has.

The Swiss representative says his government welcomed the cotton harvest monitoring system, where Uzbek human rights activists together with civil servants from the labour ministry carry out random spot checks anywhere in the country. During last year’s harvest over 200 officials were sanctioned for violations, and some 2,000 complaints filed.

Crop diversification has also begun in regions where cotton productivity is low. “That too relieves pressure on the recruitment campaign as there is less cotton to harvest, and the cotton is of higher quality,” says Chave, noting that approximately a third of fields previously dedicated to cotton is now used to grow other crops.

How much has changed?

As a result of the most recent ILO report and Swiss-supported monitoring, the United States earlier this year removed Uzbek cotton from its list of items produced from forced and child labour. And some major retail brands are re-thinking a major boycottexternal link of cotton sourced from Uzbekistan that had been spearheaded by a coalition of international NGOs known as the Cotton Campaignexternal link.

But the Uzbek-German Forum for Human Rights, which is part of the Cotton Campaign and has monitored the harvest for years, reportedexternal link that while important strides have been made to reform the system, “systemic forced labor… persisted in the harvest”.

Its director, Umida Niyazova, cast doubt on the ILO monitoring system, claiming it lacks impartiality, in spite of the involvement of human rights activists. “They are pretending it is independent monitoring, but it is not. [The involvement of the activists] is not clear enough.”

Shukrat Ganiev, one of the activists now in his second year monitoring the harvest, insisted the process is transparent. He said that during this year’s harvest, the activists are permitted to conduct monitoring on their own, and if they are pressured may call emergency telephone numbers for support.

Niyazova, a journalist who left Uzbekistan in 2009 after being imprisoned for her coverage of a deadly state clampdown in Andijon, also questions the ILO’s reported number of forced workers. While she said it was too early to report on the ongoing harvest, last year’s ILO estimate of 170,000 forced workers was far below the numbers gathered by her NGO. The Uzbek-German Forum for Human Rights reported that some 400,000-800,000 labourers had worked in the third, least productive phase of the harvest, “the significant majority of whom were forced”.

In Switzerland, home to some of the world’s biggest cotton traders, businesses are mixed on how to interpret reported changes in Uzbek cotton production. Several companies had boycotted the product through the Cotton Campaign, adding to the sharp fall in imports from the country. Last year, Switzerland imported CHF143 million in cotton, of which just CHF1,655 was sourced directly from Uzbekistan. In 2006, the year before the start of the Cotton Campaign, Switzerland purchased CHF334,716 worth of the product, and CHF 3.4 million in 2000.

Reinhart, founded in 1788 when Switzerland was the largest cotton importer in Europe, told swissinfo.ch that it had recently closed its Uzbek office for “commercial reasons” as export volumes of the raw resource had fallen, while domestic processing of the resource has increased.

Marco Bänninger, the company spokesperson, said “it is regrettable that we are no longer active in Uzbekistan” particularly given the ILO’s positive assessment of labour reforms in the country. “With the new government there have been very positive signs.”

The Winterthur-based firm was one of four Swiss traders – also including Ecom, Louis Dreyfus and Cargill – accused in 2010 by the European Center for Constitutional and Human Rights violating OECD guidelines regarding the “trade of products resulting from forced child labor”. Bänninger said he could not comment on those allegations.

Cargill, which maintains agriculture trading offices in Geneva, used to be a major buyer of cotton in Uzbekistan but has not traded Uzbek cotton for over five years, according to a company spokesperson.

Swiss retailer Coop’s clothing brand Naturaline, a signatory of the Responsible Sourcing Network petitionexternal link to ban Uzbek cotton from its supply chain, wrote in an email that “the use of cotton from Uzbekistan is prohibited” under its textile and leather guidelines and that “a lifting of the ban is not currently planned.”

Meanwhile, Tristan Cerf, a spokesperson for Switzerland’s largest supermarket chain Migros, said that the company had not signed the responsible sourcing petition because it felt it was not comprehensive enough and failed to address the issue of work conditions in other parts of the supply chain, including the ginners, cotton merchants and spinning mills.

“Without the supervision of those levels, it is nearly impossible to guarantee traceability,” he said.

A recent visit to a processing factory – where cotton is spun before being woven into fabric – highlighted ongoing challenges in the supply chain as the government plans to develop processing capacities within the country.

At Uzbekistan’s Ismoiljon Gilamlari processing factory where cotton is spun before being woven into fabric, women employees, often with young children by their sides, operate Soviet- era machines whose blasting noise cause an earache after only a short exposure. No earplugs were visible on anyone.

A manager appeared surprised when asked why the women were not using earplugs. “They don’t like to use them,” he eventually replied.

After decades of abuse, the ILO and its monitoring partners admit that doing away with violations in the cotton sector will require consistent efforts and governance before Western investors are ready to return.

Jonas Astrup, chief technical advisor for the ILO’s Third Party Monitoring (TPM) Project assured that a “very comprehensive” system was implemented in 2018 that included approximately 11,000 interviews, including 6,000 telephone polls, conducted by a private firm in Uzbekistan.

He explained that the method employed in questioning, known as the item count technique, was similar to what is used elsewhere where a crime is committed, to avoid putting victims on the spot if they may be reluctant to answer. A small number of random questions are asked that may include a question about forced labour. Instead of answering directly to the questions, respondents state how many questions apply without identifying actual positive responses.

Astrup said results from the monitoring distinguish between workers who participated in the pick due to social pressure from those who felt threatened if they refused to participate.  He said reforms in pay scales for the harvest work attracted many Uzbeks who would otherwise be unemployed. According to official statistics, youth unemployment was at 15.1% in 2018.

The ILO official emphasised that while the existence of any forced labor is not acceptable, the Uzbek government needed to be acknowledged for results achieved. He also disagreed that a boycott may help the country change. “We would like to see responsible investing that may then include best practice monitoring.”

The original article is available here