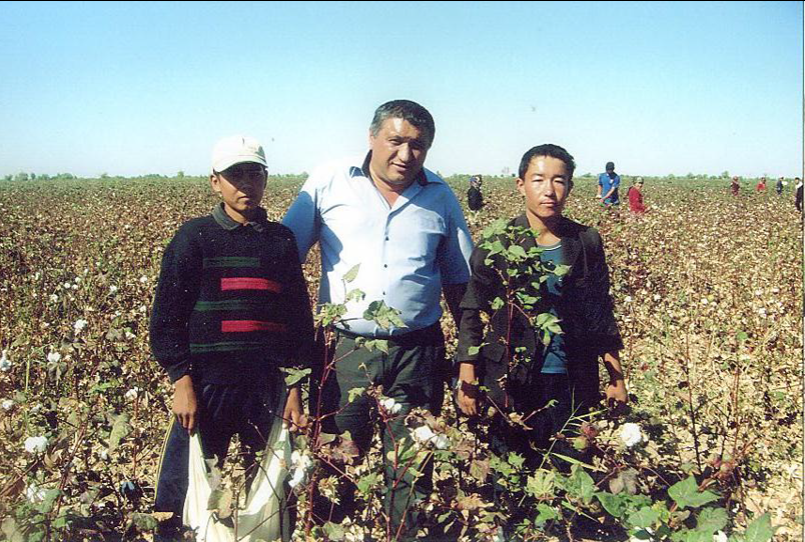 Teachers in Uzbekistan: Deprived of their Profession/ Forced to be Cotton Growers

Uzbekistan is the only country in the world where the government shuts educational institutions for 2-3 months and send students and school children to pick cotton. The cotton industry of Uzbekistan is built on forced labour, and the most convenient objects of forced cotton harvest are schools. During cotton season, you can see propaganda posters accross the country, which say “Хамма пахтага” (“Everybody goes to pick cotton”). The central government sends this “national call” first to the school teachers, and teachers either comply or face penalties, including dismissal.

According to current official data, 40% of the population of Uzbekistan are children (under age 15), and 64% are youth under age 30. Nevertheless, in the country where there are millions of unemployed (official statistics state 5% unemployment rate, and independent observers estimate 35-40% unemployment), children and students are still the main populations who are forced to work the cotton harvest.

The government of Uzbekistan policy holds Uzbek teachers hostage. They carry the burden of responsibility to organise children to go to the fields. Teachers have to supervise children during harvest season, they have to go from house to house and persuade parents to acquiesce to their children working in the cotton fields.

Teachers also have to lie about the school closures and denial of education to the children, by ensuring that there is no written evidence that school was interrupted. During the Autumn harvest children do not attend school for 2-3 months, and teachers are required to record full and regular attendance in the registration books in order to make it look that the classes are taking place.

Every year thousands of students in Uzbekistan graduate pedagogical universities and receive diplomas in education; however, most of the graduates do not wish to pursue a career in their field of education.

In May 2012, 22-year-old Jasur finished an education degree with a concentration in math and says that he is not planning to work as a teacher. He knows that despite his intentions to teach and higher education if he pursues teaching in Uzbekistan, the government will force him to spend several months in cotton fields forcing children to pick cotton instead of teaching them math. At the moment, Jasur is preparing to leave for Russia to work, because he does not wish to become a free helper of the government. Unfortunately, pursuing his dream of teaching may not be eased by migrating. Thousands of teachers with higher education diplomas do the dirty and dangerous jobs in Russia: street cleaning, porters and construction among others.

The system of school involvement is very simple. As described by a teacher from the Kashkadarya region, “the director of the school called a meeting and said that he attended a selective meeting of Prime Minister Shavkat Mirziyaev, at which the prime minister announced the start of the universal cotton harvest season. After that meeting, the mayor of the Jizzak region announced the news to school directors that from the 11th of September 7-9 grade children will start going to pick cotton and stop attending school during this period”.

School directors threaten teachers with dismissal as a penalty for any disclosure of the facts of such child exploitation.

In January of 2012, a teacher of secondary school Ziyodulla Razzakov was dismissed after he spoke to the Radio Liberty about how children are taken to pick cotton and the working conditions for them. “Schoolchildren are taken to the cotton fields in open trucks like sacks of potato, and for this transportation, they even charge children 400 soum every day,” said Mr. Razzakov.

Every school is allocated with daily targets of cotton that the school has to meet. The target is established by regional authorities and it depends on the number of children, teachers and other technical staff of the school. For school directors fulfilling the cotton quotas are more important than the quality of education provided to the children. If the quotas are not completely met, the director can be dismissed from his position and lose the needed income.

“Teachers behave like soldiers, silently carry out the order. If they refuse to work in the field, they can cut their salary and fire them in the first opportunity” said a teacher from Tashkent region school.

School teachers have a reason to be afraid.

Considering that educated professionals have an incentive to migrate to Russia or elsewhere, many schools in Uzbekistan lack qualified and experienced teachers. Therefore, school authorities have to hire the young and inexperienced graduates of colleges and lyceums, who are more easily intimidated. Any signs of dissent by a teacher will lead to the formal review process “attestation of professional qualification” and, in many cases, results in dismissal.

As for qualified teachers with the diploma and work experience, they are painfully aware of the price they pay. A teacher in primary school Marhamat who has 20 years of experience demurred, “I didn’t finish university and receive a higher education diploma just to work in the field as a labourer.” To avoid the fieldwork, she has to hire and pay for a labourer who will work in her place in the field.

According to the school teacher Marhamat, concerned citizens all over the world need to demand the end of exploitation of children and adults. Forced child labour must stop, and involving teachers in cotton harvest and weeding must stop. The future of Uzbekistan is at stake; if teachers are going to fields in the spring and the autumn, children do not receive a quality education.

Soon September is upon us again, and it means that Uzbek teachers and their students will be forced to work the cotton harvest. And again on “Teachers’ Day,” they will be in the fields working, hoping that the international community will use its leverage to demand that the Uzbek government end this practice, and awaiting the day when the situation will indeed improve.