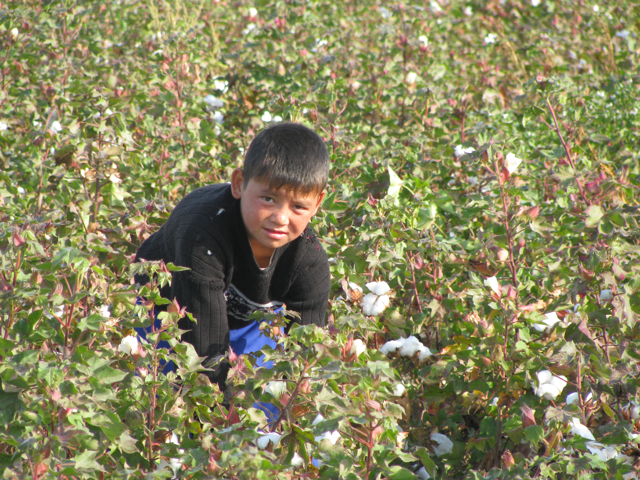 Cotton production in the Central Asian Republic of Uzbekistan continues to be one of the most exploitative enterprises in the world. 90% of the countries cotton is still hand picked, a great portion by forced labourers. While prior to 2012 the most apparent victims of the industry were children, now this system of forced labor mainly affects teenagers and young adults as well as the working population. Cotton pickers are conscripted to arduous labour in the fields, often working and living in extreme conditions and receiving little or no pay in return. The local authorities of the region, the hokimiyat, set the cotton quota that needs to be picked during each harvest. These quotas are rigorously enforced and result in children often working up to 10 hours a day. The average daily quota lies at 30 to 50 kg, for 100 ZU So’m (0.07 USD) per kilo.

Uzbekistan is one of the leaders of the world cotton market, ranking sixth place for its cotton production and third place for its export of cotton. The cotton harvest is a highly orchestrated affair, controlled and directed by the Government. A clear chain of command ensures the mobilisation of the cotton pickers. Reporting directly to the President, the Prime Minister produces the national plan for cotton production, which includes the national production target. The Prime Minister then convenes the Regional Governors (hokims) and verbally dictates the cotton production quota for each region. The quotas are then further subdivided and enforced right down through the hierarchy of state institutions. Children and adults are forced to work alongside farmers to ensure that quotas are met.

Uzbekistan is the only country in the world in which the state shuts down high schools, colleges and universities during the academic term and sends students to harvest cotton.

The system for mobilizing students is simple. There are no written documents about sending children to work in the fields. The heads of educational institutions receive verbal instructions from the local administrative body (Khokimiyat) to send students to the fields, depending on the age of the child as well as the time of the harvest season.

During more than two months students are far from their parents under the supervision of school administration. The living conditions for students and schoolchildren are often harsh, in terms of access to food, clean water, hygiene products, as well as the basic living environment overall. Students from colleges were placed in field barracks located in buildings not intended for residential dwelling, such as rural schoolhouses, dilapidated barns, local administration buildings, etc.; these are, in general, buildings which do not meet basic health and safety standards for residence.

Although the Uzbek authorities have reacted to international criticism and did not use the labor of young children during the 2012 cotton gathering period to the same extent as previously, exploitation of the adult population is on the rise, and thus, the massive violation of human rights associated with the cotton harvest continues.

Under such circumstances, it is important to raise awareness of the system of forced labor to international organizations, foreign diplomats, and the media. It is important, at this stage, to continue to appeal to international institutions and to demand from the Uzbek government to honor its human rights obligations. Uzbekistan’s ratification of the International Labour Organization’s (ILO) convention suggests that the government may invite international observers to conduct an independent international investigation into the country. It is necessary to conduct ongoing work to ensure that the ILO maintains a firm position and takes advantage of all possible opportunities to end forced labor in Uzbekistan.

Cause of the Problem

The root of the problem is the ineffectiveness of the agricultural control system. Since the countries independence from the Soviet Union in 1991, the Uzbek government has failed to reform the countries agricultural sector. The continued underinvestment in the sector, the inhibition to provide mechanized harvesters or pay adults a decent living wage for their labour, directly resulted in children being systematically drafted in to handpick the cotton. The annual cotton campaign organized by the government, guarantees the countries high annual export revenues at disproportionately low costs.

Furthermore, even though the former soviet collective farms have been officially privatized and renamed, farmers still do not have the right to choose what to sow on their own land or how to use their harvest. In addition, the state sets artificially low prices for products, while the farmers buy the necessary supplies needed for production at market prices. Farmers bear criminal responsibility for selling their own crops to anyone but the state. They cannot refuse to grow cotton, as it would cause them to lose their land, thus they are forced to tolerate the situation. Under the given circumstances, cultivation of the cotton crop becomes an unprofitable enterprise for farmers.

The problem of forced child labour in Uzbekistan became know to the public in 2007. Many years of secret reporting and monitoring by Uzbek human rights activists and journalists led to a mass boycott of Uzbek cotton in the textile industry. Many big retail names and textile brands such as Tesco, Wal-Mart, Target, Levi Strauss, Gap, Limited Brands as well as Marks & Spencer joined the boycott of Uzbek cotton by removing it from their supply chains.

Despite signing the Conventions of the ILO, journalists and human rights activists continue to report the repeated use of forced child labour during the cotton harvest in 2009. Uzbekistan does not cease to exploit its people; forced child labour remains widespread. Indeed, according to many reports, including those resulting from monitoring carried out by UGF members in 2009, this practice continues to persist and seems to have grown harsher and more exploitative than in previous years. The Uzbek Government is showing no signs of reforming the current system.

Forced labour in the cotton industry of Uzbekistan is a serious problem that violates all fundamental human rights.  Forced child labour is a form of modern slavery, which cannot be an existing issue in today’s world.

How can things change?

One of the main ways to put an end to forced child labour in the cotton sector is to push for fairtrade initiatives in the textile industry. In recent years the fairtrade textile industry has been flourishing. More and more big retail names are introducing fairtrade collections to their production line and more independent, young designers are opting to produce in an ethical an environmentally friendly manner.

It is vital to support fairtrade in order to make a change.

The consumer is king. Boycotting companies that are known to produce unethically puts these enterprises under immense pressure. Their aim is always to satisfy the consumer in order to remain in business, thus it is he who has most influence on the industry. If large retail companies choose to exclude Uzbek cotton from their supply chains, the Uzbek government will eventually be forced to change its policies.

We urge the support of fairtrade initiatives and the boycott of companies known to use Uzbek cotton in their production lines.

How can UGF make a difference?

UGF is constantly developing projects to make information available to the public about the Uzbek cotton industry. We organize press conferences, round table discussions, cultural events and exhibitions.

Our approach is also to convince the trading companies importing cotton and retailers, to follow the principles of fairtrade and boycott Uzbek cotton. We urge companies to exclude Uzbek cotton from their production chains in order to push the Uzbek government to stop the practice of forced child labor and adopt fair trade policies.

We also approach international organizations and governments of the European countries to pay more attention to this problem in negotiations with the Uzbek government.

We try to keep the problem visible, by regularly preparing reports, videos and photos, witnessing the use of forced child labor. We update the media about the problem and raise awareness among the consumers of cotton products in Europe.