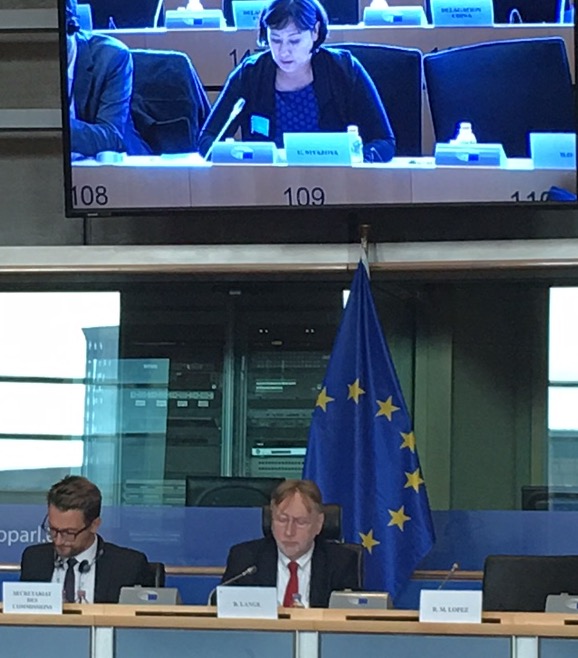 On September 25, the European Parliament hosted an exchange of views with experts to review the developments in Uzbekistan following the adoption in December 2016 of the EU-Uzbekistan Textiles Protocol.
The director from the Uzbek-German Forum, Umida Niyazova, accompanied by Philippe Dam (Human Rights Watch), represented UGF at the debate. You can find her full presentation below:

“The Uzbek-German Forum has been conducting independent monitoring on child and forced labor in Uzbekistan’s cotton sector for 7 consecutive years. In May and June of this year we also monitored forced labor during the spring fieldwork in the cotton fields.

At present, the cotton harvest in Uzbekistan is in full swing. Since September 10, we have observed and documented the mass forced mobilization of employees of state organizations, university students, and private entrepreneurs to collect cotton or pay to have someone work in their place.

To date, students have returned and resumed their studies, and this is certainly a positive step.

But the order for teachers and doctors to return does not seem to have been fully respected: Over the past two days, our monitors in various fields interviewed about 30 workers in schools and hospitals and their situation is very different. In some areas, such as Syrdarya, education workers are still being sent forcibly to collect cotton. In other areas, teachers returned, but were told to pay about $ 40, half of their monthly wage, to hire a replacement worker. Employees of numerous other organizations are also still being forced to harvest cotton.

I would like to draw attention to extortion of private businesses. So far we have interviewed entrepreneurs in six markets in different cities who pay so-called “cotton money” to a representative of the tax office or of the market administration.

Taxi drivers too are being forced to transport workers to and from the cotton fields. They have been told that this is their contribution to the collection of cotton and that there would be no payment for the service.

A distinctive feature this year is that people have been asked to sign statements confirming their voluntary participation in the collection of cotton. The testimonies of forced mass mobilization we are receiving have been confirmed by documents we have obtained.  This is an example of such a statement in which a teacher writes that “she is collecting cotton in her free time to contribute to the budget of the region.”

One document, issued by regional governor August 14, 2017, is entitled “The Order for Organizing Deployment for the Early Harvest of Cotton in 2017”.

The document details the procedure for collecting cotton. It states that harvesters should be divided into units which are formed “from the residents of the district, workers of public organizations and enterprises, as well as university students. It is forbidden to include schoolchildren in units.” The document clearly shows that the participation in the cotton harvest by employees of state organizations and students has been planned and directed by the state.

Forced labor has had tragic consequences for a number of families, and have been reported in the local press, which has recently become a little more open:

The mahalla, that is, community leaders, who are essentially appointed by local administrations, play a significant role in forcing people to work. The mahalla receive a detailed plan for the number of people they should recruit to the fields and can exert considerable pressure because they are responsible for distributing social services, child benefits and pensions.

There are hundreds of other specific cases on social media, where people of different professions write about how they are forced to pick cotton under the threat of dismissal or unless they can pay for someone to replace them.

ILO representatives are keen to point out that people can simply lodge a complaint.

People do not complain because the Federation of Trade Unions of Uzbekistan, which is responsible for the complaints mechanism , is integrated into the state apparatus. Members of the Federation participate in the mobilization campaign; local newspapers publish propaganda photos when the trade union federation goes to the cotton fields and gives gifts to the best collectors. People do not complain simply because it is obvious that if the state itself forces you to work in a cotton field, there is no point in complaining to the same state.

With regard to the payment for the harvesting cotton: Payment for pickers has almost doubled and is now six cents per kilo of cotton. But unfortunately, because of inflation, this has not attracted more voluntary collectors. Food prices have gone up 2-3 times compared with last season. And although the pay for picking cotton has increased, this does not mean that people are able to buy more food.

I would like to acknowledge that over the past year the general situation has become slightly better. The new president has improved relations with Uzbekistan’s neighbors and we are seeing a weakening of censorship in local media. These changes are long overdue and very welcome.

And still, it remains unclear whether president Mirziyoyev is willing to address the systemic problems in the country. The issue of forced labor cannot be eradicated by only one single decree from Tashkent. The situation is endemic and long-standing, and, as long as the state is the organizer of forced labor, it will only end when the the system which enables it is dismantled.

As long as the state has the monopoly of the cotton sector and refuses to pay market rates to cotton pickers, regional authorities will continue to use administrative pressure to send people to collect cotton. The return of students from the cotton fields, and the attempt to return teachers and doctors is a positive sign. But the system of forced cotton quotas means these positive changes are at great risk. It means that if one part of the population is freed from collecting cotton, then the burden will fall on another part of the population. It is expected that instead of being forced to collect cotton themselves, regional governors will instruct employees to hire workers to do it in their place. That is, the people of Uzbekistan will have to subsidize the cotton sector from their own pockets.”