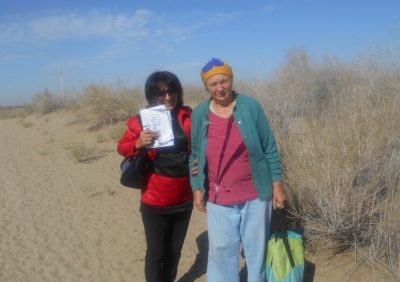 In the last few years, the government of Uzbekistan has undertaken reforms aimed at ending forced labor in its cotton industry, some of which have resulted in a significant reduction of the number of citizens forced into the fields. However, the root structural problems of the system which continue to incentivize and drive forced labor on a massive scale remain unaddressed. In fact, Uzbek-German Forum for Human Rights monitored the 2018 cotton harvest and estimates that on November 12th, 2018 alone, between 400,000 and 800,000 individuals were forced to pick cotton by the government. Public sector workers such as military personnel, firefighters, small entrepreneurs, bank employees, and factory workers bore the burden of picking cotton or were extorted to pay for pickers to take their place.

The international apparel community has demonstrated its solidarity with human rights organizations by signing the Uzbek Cotton Pledge, an initiative of the Cotton Campaign, which is currently supported by 313 brands and retailers. It is a commitment by the signatories to not knowingly source cotton from Uzbekistan as long as it is produced with forced labor. The Pledge signatories—which all also have internal policies and legal obligations to prevent forced labor in their supply chains—consist of global leaders, such as Levi’s, Gap, Zara, H&M, and IKEA, to name just a few. Because of the commitment of hundreds of brands, the Pledge has been a critical incentive to the Uzbek Government to continue to implement its reforms.

Contrary to the claims of those advocating for a removal of the boycott, the Uzbek Cotton Pledge does not stand in the way of job creation or negatively impact farmers. It calls for the transformation of the cotton industry with decent working conditions for cotton pickers, profitable business models for farmers, and one that is appealing for brands seeking to source responsibly. The Pledge squarely targets the Uzbek government which is the sole beneficiary of profits from international cotton sales, reliant on the use of forced labor, and hence has been the most affected by declining demand as a result of the boycott.

The Pledge is also reflective of international laws and regulations in place for brands and is certainly not the sole barrier that stops brands from sourcing cotton from Uzbekistan. The brands’ commitments, legal requirements, and internal policies prohibit them from sourcing goods made with forced labor, which is why lifting the Pledge prematurely will not result in the Pledge signatories changing their buying practices. Only real structural change, independent monitoring, and oversight by an empowered civil society will do that. This work is up to the Uzbek government.

Lifting the Pledge prematurely would allow the Uzbek government to fall short of its commitments to reform the industry. The Uzbek government has shown it is able to intervene to end child labor and forced labor of students and public sector employees.

The Cotton Pledge is, therefore, an essential means of ensuring the Uzbek government implements reforms that address the systemic nature of forced labor for all its citizens. We should not let them off the hook before that has been achieved.

In recent weeks, the Uzbek government has repeatedly called on the international community to support them in advocating for the Pledge to be lifted. Some Uzbek human rights activists have also supported this call. However, many other activists in the Uzbek human rights community, who have monitored forced labor in Uzbekistan’s cotton fields for years and played a key role in ending child labor in the cotton sector, believe that mass forced labor will continue if the boycott of Uzbek cotton is lifted. They have now sent an appeal to international companies urging them to remain committed to the boycott:

“We, independent Uzbek human rights defenders, believe that it is too early to lift the boycott of Uzbek cotton because of the systemic nature of forced labor, which was widely used in the 2018 harvest in Uzbekistan and Karakalpakstan.

Despite the government’s efforts to reduce forced labor, its root causes remain intact which led local authorities to again force citizens into the fields to pick cotton.

According to our observations, private cotton clusters will not necessarily lead to the eradication of forced labor. Businesses and organizations across the country were required to send their employees to pick cotton during the 2018 harvest. We observed that miners, electricians, chemical plant workers, police officers, military personnel, traders, employees of Uzneftegaz, and bank employees were sent to remote areas to pick cotton.

These cotton pickers were forced to live in barracks and rudimentary field camps, far from their homes and families, often without heating and basic hygiene facilities and were obliged to fulfill the daily cotton quota, working from early morning until late in the evening and often for periods of up to four weeks or longer.

We believe that the boycott should be continued until forced labor in Uzbekistan is completely eradicated. Premature lifting of the boycott would send the wrong signal to the Uzbek government at this time. Without the commitment of international companies not to knowingly source cotton produced with forced labor, we would not have had the landmark successes we have so far achieved: the prohibition of child labor and intervention by the government to stop forcing students, doctors and teachers to pick cotton.”