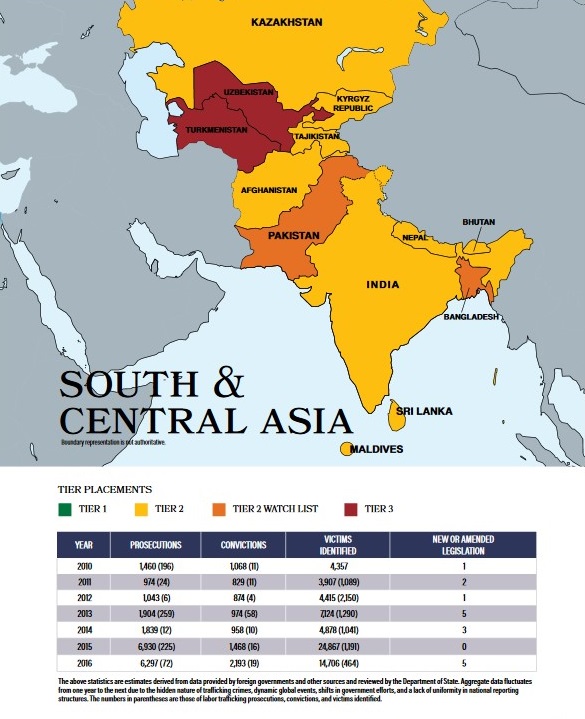 (Washington, DC) — On June 27, the U.S. State Department announced that the governments of Uzbekistan and Turkmenistan remain in the lowest possible ranking, Tier 3, in the annual Trafficking in Persons (TIP) Report.

“The U.S. Government is to be commended for its principled and justified Tier 3 ranking for Uzbekistan and Turkmenistan. Both governments continue to run the world’s largest systems of forced labor in cotton production,” said Bennett Freeman, former Deputy Assistant Secretary of State, Bureau of Democracy, Human Rights and Labor. “The State Department’s annual TIP Report is the world-recognized standard by which counties are ranked for their efforts to prevent trafficking in persons, and the result today shows that the ranking of these two countries still reflects the reality on the ground.”

Unfortunately, over the past year, both governments continued to practice state-sponsored forced labor on a massive scale during their respective annual cotton harvests. Human rights activists and civil society actors who attempted to document those conditions were detained and physically assaulted in both countries.

“In 2016 alone, the Uzbek government forced about one million citizens to pick cotton,” said Umida Niyazova director of the Uzbek-German Forum for Human Rights (UGF). “Civil servants have already been mobilized in 2017 to weed the cotton fields, which shows that the Uzbek government has not changed its long-standing practice of forcibly mobilizing people to produce cotton.”

UGF coordinates a network of independent monitors who gather evidence documenting state-sponsored forced labor. Today UGF and Human Rights Watch jointly released the 2016 harvest report. The report links forced and child labor in Uzbekistan to the World Bank, which is funding half a billion dollars in agricultural projects there. Both reports issued today accurately portray the forced labor system in Uzbekistan, in contrast to the International Labour Organization monitoring report released earlier this year that relied on flawed methodology and a recent European Parliament decision to sign a textile protocol with Uzbekistan that essentially ignored the coerced nature of cotton production.

“Maintaining last year’s downgrade of Uzbekistan in the 2017 TIP Report sends a strong warning to international financial institutions, including the World Bank, as well as governments and businesses that cooperate with Uzbekistan,” said Allison Gill, researcher at Uzbek-German Forum for Human Rights and co-author of the report. “The U.S. Government should press the World Bank Group to suspend its investments in agriculture projects in Uzbekistan until the Uzbek government dismantles its forced labor system.”

“In 2016 and 2017 the government of Turkmenistan exacerbated its repression of independent monitors, journalists and human rights activists attempting to document violations during cotton production,” said Ruslan Myatiev, editor and founder of Alternative Turkmenistan News. “ATN reporter Gaspar Matalaev has been imprisoned for nearly nine months on false charges for his work monitoring state-sponsored forced labor in Turkmenistan’s cotton harvest.”

Uzbekistan and Turkmenistan are the world’s sixth- and ninth-highest exporters of cotton, respectively. The Uzbek and Turkmen governments both funnel hundreds of millions of dollars from annual cotton sales, by conservative estimates, into non-transparent, unaccountable funds only accessible to government elites. The cotton makes its way through opaque global supply chains and eventually winds up in the products of well-known global brands.

“With this year’s report, the U.S. Government shows its supports for civil society activists who risk their lives documenting labor and human rights abuses in Uzbekistan and Turkmenistan,” said Judy Gearhart, Executive Director of the International Labor Rights Forum, a founding member of the Cotton Campaign. “We now urge the U.S. Government to use all means at its disposal – including its vote at the World Bank, to end the ongoing use of forced labor by these two governments.”
Also, see:
2017 Trafficking in Persons Report: Uzbekistan
2017 Trafficking in Persons Report: Turkmenistan