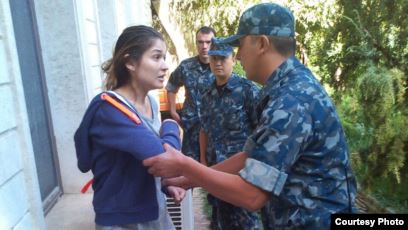 Corruption, Extortion and Forced Labour in the Cotton Sector

Violations of the Freedom of Movement

[1] As of 2017 responsibility for the agricultural sector was transferred from the prime minister (now-president Shavkat Mirziyoev held the post of prime minister from 2003-2016) to the minister of agriculture and water resources.

[2] UN Human Rights Committee, Concluding Observations Uzbekistan, UN Doc.  CCPR/C/UZB/CO/4, June 2015, §19: “While acknowledging the measures taken by the State party to reduce forced labour involving children under the age of 16 years in the cotton sector, the Committee is concerned about consistent reports indicating an increase in the use of individuals above the age of 16 years and adults to carry out forced labour in the cotton and silk sectors. It is also concerned about allegations of widespread corruption and extortion and hazardous working conditions in the cotton sector and poor living conditions during the harvest, which have even resulted in deaths (arts. 6, 8 and 24). The State party should put an end to forced labor in the cotton and silk sectors, inter alia, by enforcing effectively the legal framework prohibiting child and forced labor, including by vigorously prosecuting those responsible for violations and by improving the working and living conditions in those sectors. The State party should also review its laws and practices to ensure financial transparency and address corruption in the cotton industry and take all measures necessary to prevent deaths in connection with cotton harvesting, investigate thoroughly such cases when they occur and provide effective remedies, including adequate compensation, to victims’ families.”

en/753131468301564481/pdf/105190-REPLACEMENT-WP-P151288-PUBLIC.pdf (accessed May 24, 2017), corroborates the Uzbek-German Forum’s findings of the structure and operation of the cotton system, based on research conducted since 2009, including dozens of interviews with farmers and local officials, leaked official documents, and harvest monitoring. See, for example, “Cotton: It’s Not a Plant, It’s Politics— The System of Forced Labor in Uzbekistan’s Cotton Sector,” Uzbek-German Forum, Berlin, 2012, http://uzbekgermanforum.org/wp-content/uploads/2012/12/cotton-its-not-a-plant-its-politics-online.pdf (accessed May 24, 2017); and “A Systemic Problem: State-Sponsored Forced Labor in Uzbekistan’s Cotton Sector Continues in 2012,” Uzbek-German Forum and the Cotton Campaign, Berlin, 2013, http://uzbekgermanforum.org/wp-content/uploads/2013/07/SystemicProblem-ForcedLabour_Uzbekistan_Cotton_Continues.pdf (accessed May 24, 2017).

[xvii] Decree of the President of the Republic of Uzbekistan, “On organizational measures to ensure the timely and quality harvesting of raw cotton in 2014,” No. PP2380, September 4, 2014, http://harvestreport2015.uzbekgermanforum.org/pdf/President/2014.09.04_Resolution-of-the-President.pdf (original and English translation, accessed May 24, 2017).

[xviii] Muradov and Ilkhamov, “Uzbekistan’s Cotton Sector,” p. 15; Decree of the President of the Republic of Uzbekistan, “On the formation of the holding company ‘Uzpakhtsanoateksport,’” Tashkent, Uzbekistan, October 27, 2015, http://www.norma.uz/raznoe/ukaz_prezidenta_respubliki_uzbekistan7 (accessed May 24, 2017).

[xxiv] Muradov and Ilkhamov, p. 18. The Selkhozfond was established by presidential decree, Decree of the President of the Republic of Uzbekistan, “On the establishment of a fund for the accounting for agricultural products procured for state needs,” No. UP-2165, December 31, 1998, and subsequent amendments, http://www.lex.uz/pages/getpage.aspx?lact_id=354560 (accessed May 24, 2017).

[xxv] “Comments Concerning the Ranking of Uzbekistan by the United States Department of State in the 2016 Trafficking in Persons Report, submitted by the Cotton Campaign,” Cotton Campaign, January 30, 2016, p. 2, http://www.cottoncampaign.org/uploads/3/9/4/7/39474145/cc_comments_jtip_uzbekistan_30january2016_with_endorsements.pdf (accessed May 24, 2017).

6. Order from the Central Bank of the Republic of Uzbekistan Directing All Employees to Hire Cotton Pickers (translation below)

To the chairmen of the boards of commercial banks as listed

With the purpose of contributing to the 2017 cotton-harvest campaign, you are requested that every member of staff in regional branches of the Central Bank should hire five people each to pick cotton.

The attachment is on page 2.