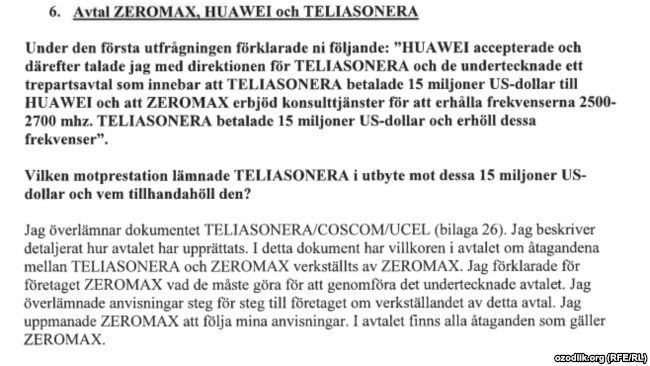 Federal Department of Justice and Police

We, a group of Uzbek activists, have raised numerous concerns regarding the fate of stolen Uzbek assets owned by Gulnara Karimova. These assets are currently frozen in Switzerland and other European countries. We have made repeated calls for the responsible repatriation of Karimova’s assets to Uzbekistan, under the precondition of anti-corruption reforms to be adopted and implemented in Uzbekistan in the interests of the Uzbek people – the true victims of grand corruption in Uzbekistan. This time, our statement is prompted by another concern: the deepening efforts of Zeromax GMBH’s former creditors to obtain Karimova’s illicit assets as compensation for losses incurred in dealing with Zeromax GMBH. We find these claims to be illegitimate, dubious, and legally questionable.

Zeromax GmbH was initially registered in Delaware, United States as Zeromax LLC and then moved to Zug, Switzerland registering as Zeromax GmhB from 2005, before being dissolved in 2010. Although Zeromax GmbH was legally owned by Mirdjalil Jalalov and his wife, the company received full and exclusive support from the government of Uzbekistan, allegedly due to Gulnara Karimova. With this privileged support, they rapidly acquired highly lucrative deals, assets and preferential business positions in sectors including oil and gas extraction, transportation and export, cotton and textile industries, manufacture, soft drinks, mining, food processing. Within a few years, Zeromax became the largest investor in Uzbekistan’s economy, with 22 subsidiaries, operating revenue of $3 billion, and assets of $1.7 billion (2008).  Such a high-level position within the Uzbek economy – a profoundly corrupt environment, deeply embedded within a system of patronage – was impossible to achieve without the Uzbek government’s exclusive support at all levels. Yet, Zeromax faced challenges from rival groups within the Uzbek ruling elite, notably from the National Security Service. As a result, in May 2010, a Tashkent court seized Zeromax’s assets due to tax defaults, and in October of that year, the company was declared insolvent, with creditors left unpaid.

Our understanding is that Zeromax’s unpaid creditors have filed a claim with Swiss authorities urging them to allocate $800 million of Gulnara Karimova’s frozen assets (pending their confiscation) to them, in order to compensate for their losses in Uzbekistan. This claim is based on allegations Gulnara Karimova was the beneficial owner of Zeromax.

In our view, given the role the government of Uzbekistan played in pushing Zeromax to bankruptcy, the creditors should instead direct their claims to the Uzbek authorities who are responsible for Zeromax’s financial problems. The government allowed Zeromax to take control over one lucrative asset after another but then forced the company to fund expensive projects that had nothing to do with commercial business – construction of the Palace of Forum, a stadium, a sports school, various charitable expenses that were probably forced. These projects ultimately went unpaid by the Uzbek government and were a key reason for Zeromax’s indebtedness.

Negligence of Due Diligence, Political Risk and Code of Compliance

We believe Zeromax’s creditors were aware of the dubious background of Zeromax. There was sufficient press coverage well before Zeromax’s bankruptcy that linked Gulnara Karimova to Zeromax. It is highly likely the creditors expected preferential business options, a favorable business environment, and lucrative business opportunities, akin to the expectations of telecom companies (TeliaSonera, Vimpelcom and MTS) had when negotiating shadowy deals with Gulnara Karimova.

Zeromax’s creditors are yet to publicly disclose their identity and announce their claims against Karimova publicly, likely owing to the circumstances surrounding their relationship with Zeromax. They have not presented any public arguments to support their claims that money was stolen from them, not the Uzbek people.

As members of Uzbek civil society, we have a right to know whether creditors violated the code of compliance and failed to meet integrity standards in pursuing business with the company closely associated with the corrupt presidential family. We demand full transparency and disclosure of all contracts and related communication with Zeromax, as well as convincing responses for the following questions:

It is difficult to imagine the creditors were unaware of the political and due diligence risks of engaging with Zeromax; and the fact that Zeromax was controlled by Gulnara Karimova, not Mr. Jalalov.

There appear to be inconsistencies (to tell the least) with the creditors’ claims. For instance, we have seen an audit report prepared for one of the creditors, the Russian company ETK LLC (in Russian, ООО «ЕТК»). This document prompts us to suspect an element of fraud in the claim advanced by this company. The report, a copy of which the Swiss authorities are likely to have, stated ETK had claimed $395 million as compensation for the unpaid delivery of steel pipes to Zeromax. It is clear from the report that there was only one contract between ETK and Zeromax (No. T1/67-06) to the amount of $100 million, and that ETK had complained about payment delay under that contract. ETK claims that, despite of having been unpaid for the previous deal, it entered into a subsequent agreement with Zeromax to deliver pipes for $268 million. Yet the report authors present no proper contract nor contract number identifying the agreement. Looks like the second deal has the key hallmarks of a fraudulent scheme similar to the Russian Laundromat: sign a fake contract and claim a refund for not fulfilling it, followed by kickbacks and money laundering through offshore accounts.

Although the audit report does not provide the full name of ETK, they can be easily identified as Eurasian Pipeline Consortium, LLC (ООО «Евразийский трудопроводный консорциум»), one of the very few Russian companies selling steel pipes. Interestingly, ETK is, in fact, re-selling pipes produced by the Khartsyzk pipe plant in Donetsk, a breakaway Ukrainian territory controlled by separatists. A subsidiary of Metinvest, the Khartsyzk pipeline plant is controlled by Ukrainian oligarch Rinat Akhmetov. ETK is owned by another company with the same name, Eurasian Pipeline Consortium, LLC, whose main owner is  Alexander Karmanov, a shadowy figure close to oligarchs Arkady Rotenberg and Gennady Timchenko, both of whom are subject to US and EU sanctions.

We support the Swiss authorities decided to reject the creditors’ claim for Gulnara Karimova’s assets and urge them to maintain this position. As stated, based on the public interest nature of this case, the creditors should provide full public transparency on their past relationships with Zeromax before any compensation deal is considered with the Swiss and Uzbek authorities.

We wish to reiterate our call upon the Swiss authorities to return Gulnara Karimova’s assets to Uzbekistan responsibly. This would include a framework, benchmarked against anti-corruption reforms, that aim to eliminate the institutional conditions which permitted corruption in the telecommunication sector before the assets are returned.

So far, Uzbekistan has made little to zero progress in Uzbekistan’s anti-corruption reforms; and the telecommunication sector is showing the trademark signs of reoccurrence. The government recently issued a decision to grant only one of Uzbekistan’s three major mobile operators (state-owned UMS) direct access to the World Wide Web, thereby undermining fair competition for other operators in the industry (who can only access the internet via state-run Uzbektelecom). In other sectors, especially the construction industry, we also see risks of corruption and money laundering on the rise.

Governance related problems still remain, which underscore the need for a benchmarked approach to guide the return of stolen assets to Uzbekistan, in order to tangibly reduce the risks of grand corruption, misuse of returned assets and support longer-term initiatives for anti-corruption reforms in Uzbekistan.