All Eyes on the Boll 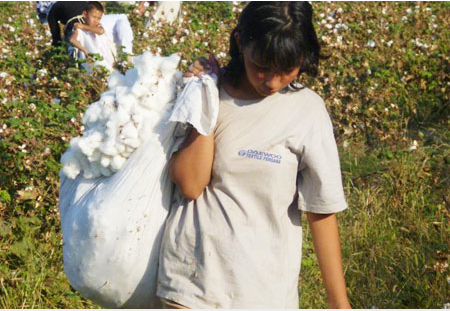 Uzbekistan, the sixth-biggest cotton producer in the world, frequently comes under criticism for closing schools during harvest season and forcing children to pick cotton.

But that’s only part of the picture. Almost everyone it seems — from public-sector workers to shopkeepers to merchants — is required to pick cotton.

“Nowadays, Namangan looks like an abandoned place,” says a resident of the eastern Uzbek town. “Many shops are closed, many market stalls are empty, bakeries are closed — everybody has to go to the cotton farms.”

In Namangan mosques, cotton is even the subject of Friday Prayers. Mullahs pray for a good harvest and encourage people to take part in the cotton-picking campaign.

In the southern city of Karshi, soccer players from the local Nasaf team have joined doctors and teachers in the cotton fields. Soldiers from a nearby military garrison pick cotton alongside them.

In the neighboring province of Surkhondaryo, police are taking part in the harvest.

Police are spared from cotton picking in the central region of Jizzakh, but they do have another task directly involved with the cotton business.

Traffic police there stop passing vehicles on the highways and force drivers and passengers to pick cotton, according to Jizzakh residents.

Ziyodullo Razokov tells RFE/RL’s Uzbek Service that while he was attending a wedding recently, police officers stopped the wedding convoy and forced all the guests — all in party clothes — to pick 10 kilograms of cotton each. “They only let the bride and the groom go,” Razokov says.

To opt-out, according to locals, people must pay 20,000 soum, about $12. “The police say they’ll pay this money to the laborers who are looking for a job, and they’ll pick 10 kilograms of cotton instead of you,” according to one local.