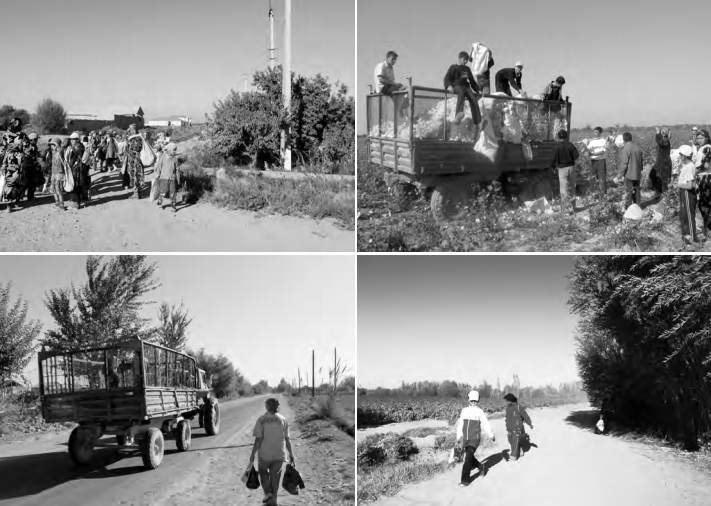 “Cotton – it’s not a plant, it’s politics”: The system of forced labour in Uzbekistan’s cotton sector- Evidence from the 2011 cotton harvest presents the depth and brutality of state-sponsored forced labour of children and adults in the cotton sector of the Central Asian country. This newly-released report of the 2011 cotton harvest, by the Uzbek-German Forum for Human Rights (UGF), documents in vivid detail the coercive mobilization of over 2 million Uzbek school children, college and university students, government employees, private business employees, and farmers. Based on extensive field research, the UGF report concludes that forced labour in the Uzbek cotton sector will only end when the Karimov regime faces problems exporting cotton and sees lower cotton revenues.

“…The country is increasingly beginning to resemble a large Stalin-era labour camp,” is how Uzbeks interviewed by UGF described the extent of forced labour for the 2011 cotton harvest. As in previous years, children as young as age 11 were forced to meet daily cotton picking quotas of 40-60 kilograms. The 2011 harvest also included a significant increase in forced labour of adults, accompanied by more extreme punitive measures and disruptions to schools, hospitals, transportation, and other essential services, reports UGF. Parents cannot protect their children despite the dangers to their children’s health, negligible compensation, and negative impact on their education. UGF’s countrywide assessment documents how participation is enforced by fear: students fear expulsion from lyceums, colleges, and universities; government employees fear to lose their job; low-income citizens fear losing social welfare benefits. The UGF report includes the release forms signed by students in 2011, in which they agreed to any punishment for refusing to participate in the cotton harvest.

“If the sale of cotton were in our hands, then farmers would be the richest people here. But the way things are now, cotton has more costs attached to it than profit,” states a farmer interviewed in the report. UGF’s research details the debt bondage that keeps farmers producing cotton, although many have already migrated to Russia in search of an income: The government owns the land and contractually obliges farmers to use the majority of the land to produce cotton and deliver an annual quota, under threat of losing their land, explains UGF. Farmers face monopolized input and output markets; the low price paid to farmers for cotton is set by the government and falls far short of the high prices paid by the farmers to government-controlled input suppliers.

Command control of the cotton sector begins with the prime minister and is enforced through the prosecutor’s office, regional governments and even the participation of the National Security Services, the report explains. The very officials vested with the responsibility to implement the law are complicit in breaking it, UGF concludes. The report notes that national law prohibits forced labour and child labour. Internationally, the government has also signed key United Nations conventions, under which they committed to protecting the rights of the child and all citizens’ freedom from forced labour. UGF’s research led them to conclude that Uzbek people understand the laws as merely a “smokescreen behind which there is a completely different reality, governed by unwritten laws, and above all, the ultimate law – ‘do as the chief orders, and do not argue.’”

Increasing corruption is highlighted by the report as another concerning trend in the 2011 harvest. Purchases of medical exemptions to avoid picking cotton, severe restrictions on exemptions for legitimate medical conditions, and hiring local day labourers are all practices in which income is extracted from the average citizen to ensure a nearly free source of labour for the cotton sector, explains UGF. Schools reported shortages of gas and electricity, while the government refused to transparently account for the estimated $1billion in income from its 2011 cotton exports. Due to the lack of transparency and accountability of public finances and of the use of major export revenues, the society is not aware at all how those export revenues are contributing to the wellbeing of the nation and its development.

Once again in 2011, the government employed repressive tactics to conceal the coercion-based cotton harvest, UGF report. Throughout the harvest, law enforcement officers accompanied the transportation of ‘picking brigades’ and ensured that pickers did not communicate with any visitors to the cotton fields. Citizens who attempted to observe and document cotton-picking were detained, and their photographs were taken away. School directors and teachers faced dismissal for any disclosure of the exploitation of the school children. UGF found examples made of a school principal dismissed and a teacher docked his pay for disclosure, and that enough similar cases ensured silence by the majority.

The report recommends to the cotton and apparel industry to implement the global boycott of Uzbek cotton, and to companies with operations in Uzbekistan that they conduct independent labour rights monitoring. The government of Uzbekistan, UGF concludes, must transform the cotton sector from the system governed by punitive measures and administrative coercion into a system driven by economic incentives. As a first step, the report recommends that the government invite the International Labour Organisation to send a tripartite, high-level mission to monitor the cotton harvest and to avail itself to technical assistance from the ILO Secretariat, as recommended by the ILO tripartite supervisory body.

Click here to access the full report “Cotton – it’s not a plant, it’s politics”: The system of forced labour in Uzbekistan’s cotton sector- Evidence from the 2011 cotton harvest.