Elena Urlaeva is Detained in a Psychiatric Hospital 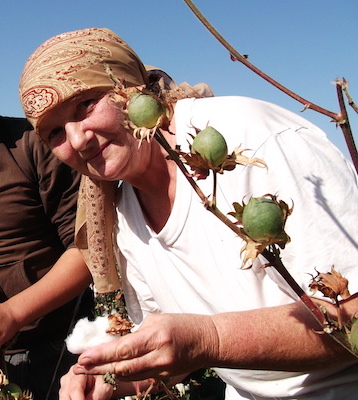 The government of Uzbekistan should immediately release activist Elena Urlaeva from the Tashkent City Psychiatric Clinic, said the Cotton Campaign today. Urlaeva, a well-known activist and the elected leader of the Human Rights Alliance of Uzbekistan (PAU), checked into the hospital on March 9 after experiencing multiple traumatic events. In late April, Urlaeva’s doctor informed her and her son that she was in good health and would be released on May 2. However, the hospital has since refused to release Urlaeva without citing any medical reason, raising serious concerns that the government has pressured the hospital to use her confinement in the hospital as a means of arbitrary and indefinite detention.

“Holding Elena Urlaeva in a psychiatric hospital without a clear medical rationale is a grave breach of medical ethics,” said Umida Niyazova director at the Uzbek-German Forum for Human Rights (UGF). “She should be released immediately, and the Uzbek government must cease using hospitals as extrajudicial detention centers.”

Elena Urlaeva has been called the “bravest person in Uzbekistan” for her dedicated work as an advocate for human rights for the Uzbek people in the face of brutal retaliation from the government. For 16 years, Urlaeva has documented the government’s systematic use of forced labor in the cotton sector. As she recalled in a video-recorded acceptance speech to the 2016 Labor Rights Defenders Awards, it was the state’s use of forced child labor that drew her to human rights work. Urlaeva’s work to expose forced child labor contributed to the Uzbek government significantly reducing child labor starting in 2013. Urlaeva continues to document the crime of forced labor in the cotton sector, whose victims include more than one million Uzbek citizens each year. Over the years, she has also stood up for the rights of those facing unjust convictions and abuses of power by local officials. The Uzbek government has retaliated against Urlaeva and taken steps to silence her including by arresting her five times in 2015 and subjecting her to brutal body-cavity searches, harassment, and surveillance.

This is not the first time Uzbek officials have forcibly detained Urlaeva in a hospital. She was forcibly committed to a psychiatric hospital in 2001, 2005 and 2012. Each time, international organizations condemned the “punitive psychiatry” and demanded her release. In 2005, the PAU leader went on hunger strike to protest her compulsory hospitalization.

“It is critical that the World Bank, ILO, and diplomatic missions in Tashkent press the Uzbek government to release Elena Urlaeva immediately, and to hold the government accountable for harassment of human rights defenders,” said Judy Gearhart, executive director at the International Labor Rights Forum (ILRF).

The detention of Urlaeva coincides with the spring cotton field weeding season, preventing her from monitoring forced mobilization. While Ms. Urlaeva remains in the hospital cell, her colleagues continue to work and have documented officials forcibly mobilizing teachers and others to weed the cotton fields, as documented in previous years.

The Uzbek government has also cracked down on Urlaeva’s colleagues who also report forced labor in the cotton sector. Police arrested, beat and filed charges of “disorderly conduct” against Dmitry Tikhonov in retaliation for his monitoring in 2015, eventually forcing him to flee the country. In November 2015, officials arrested Uktam Pardaev, confiscated his computer and files used for monitoring, and then detained him for two months and subjected him to beatings. He was only released under the condition he would no longer report human rights concerns. For their bravery in the face of such repression, the ILRF honored Uzbek human rights defenders and highlighted the work of Urlaeva, Tikhonov, and Pardaev with the Labor Rights Defenders Award, on May 12.

Much more support from the international community is needed. The Uzbek government’s active campaign to silence human rights defenders undermines its commitments to the International Labour Organization (ILO) to apply fundamental labor conventions and to the World Bank to apply labor laws. By repressing monitors’ attempts to report labor law violations, the government is reinforcing the message to citizens that rule of law only exists on paper to attract international investment.