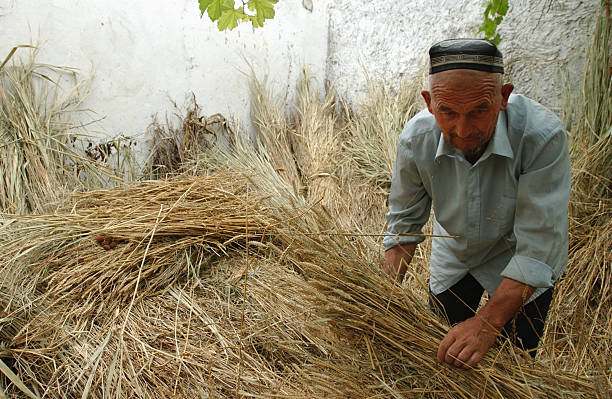 Chief of Police Summoned for Questioning

“Today, I and two other farmers, Bakhriddin Turayev and Abdukhamid Pardayev, who gave an interview to an Ozodlik reporter, were summoned to the mahallah [trans. – city council]. When we came before the mahallah committee, there were employees of the Department of Internal Affairs from the Qashqadaryo region. They asked us what had happened. We told them how the chief of the district police had beaten farmers. They asked us to write and sign a statement. They promised to conduct an investigation. We would welcome an investigation,” said 33-year-old Rakhmatullo Khodjamurodov, head of the “Abdugafurov Mukhammad” farm.

According to his account, representatives of the regional police spoke to an elderly farmer, Abdujabbor Korjovov, who was brutally beaten by the chief of the District Department of Internal Affairs, Jakhangir Rajabov.

It has not yet been reported if charges have been brought or what measures will be taken against him.

A Farmer’s Story of Police Brutality

A day earlier, on June 27, farmers from the Karshi district contacted Radio Ozodlik and reported that this year many local farmers have not been able to meet wheat quotas due to a water shortage.

They claim that since June 19, farmers who have not met their wheat quotas have been subject to physical violence by the chief of the Karshi district Department of Internal Affairs, Jakhangir Rajabov.

This is what one of the farmers, 33-year-old Rakhmatullo Khodjamurodov, told Radio Ozodlik on June 27:

“Nearly ten days ago, a local policeman brought me to the field station of our farmer, Khalima-opa. Ten other farmers were there as well. We were standing in a row and then the chief of police, Jakhangir Rajabov, approached us and started asking why we had not met the quota. When farmers started explaining to him that some of them could not submit 10 tons and some of them 20 tons of wheat, the chief of police started slapping our faces. He was hitting our ears and slapping our faces with both of his hands.”

“This time, we were gathered in the field station of a farmer named Fayzali. When I arrived, many of our farmers had already been beaten by the chief of police. One of them was bleeding from his face. When I approached them, Rajabov asked me how many tons of wheat I had submitted this year. I explained to him that I could barely have bought 13 tons. “How many tons are left for you to submit?” he asked me. I said that I needed 26 tons more. Then he started beating and kicking me hard. Apart from me, he had also beaten another young farmer, Ilkhom Ostonov.”

Brutal Beating of an Elderly Farmer

Another farmer from the Karshi district, Bakhriddin Turayev, reported that due to a drought, he was five tons of wheat short of meeting the quota.

“That is why Jakhangir Rajabov slapped my face. I borrowed five tons of wheat from another farmer to avoid Rajabov hitting me again. We young farmers are somehow able to tolerate violence from the chief of police but the worst thing is that he beats elderly farmers. When we are summoned to the police office, relatives ask: “When are you going to be beaten again?” If farmers do not meet the quota, the authorities must conform to the law and learn the reasons why. If we do not have water, we cannot order the rain, can we? The water comes to us from an area that is 25 kilometers away from our district. Our district is located very far away from the source. There are some fish farms on the way which use this water as well, so almost no water reaches us,” complained the farmer from the Karshi district.

Fear of the Authorities

According to Abdukhamid Pardayev, a 52-year-old farmer from the Karshi district, local farmers beaten by the chief of the district police are afraid of filing complaints with the appropriate authorities.

After the conversation with the Karshi district farmers on June 27, an Ozodlik reporter phoned Jakhangir Rajabov.

As soon as he learned that a reporter from Radio Ozodlik was on the line, Rajabov pretended that he could not hear anything and hung up.

After that, our reporter was not able to reach Rajabov by phone. Moreover, Ozodlik was unable to obtain a comment from the chief of the Karshi district, Gayrat Begaliyev.

The original article was published on June 23 on the website of Radio Ozodlik.

Source of the image: https://bit.ly/2KoM6Ys