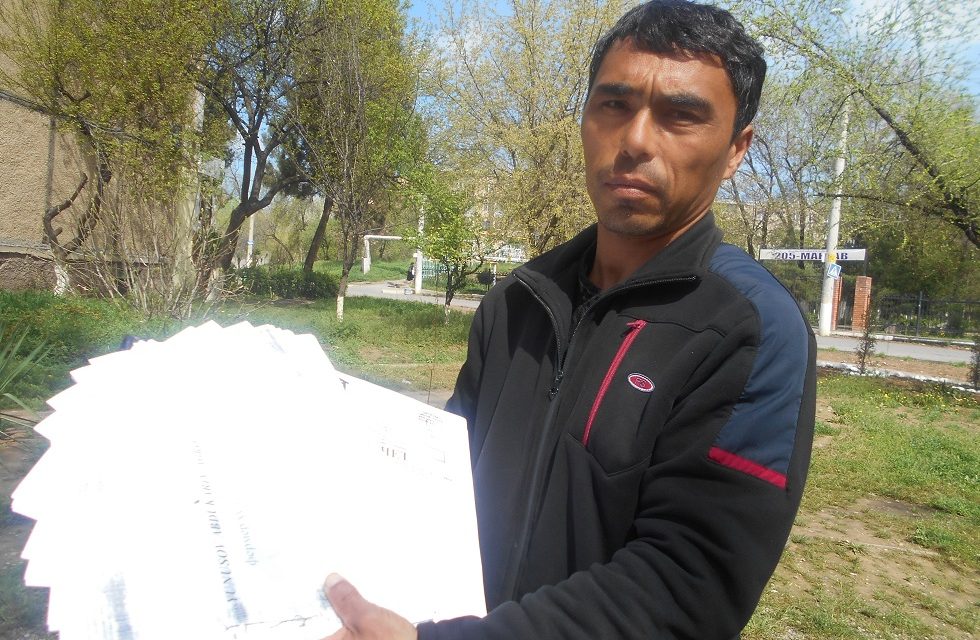 On April 28, 2020, the hokimiyat of the Kuyi-Chirchik district of the Tashkent region sent bulldozers that uprooted fruit trees on 1.5 hectares of farmland belonging to Sherzod Kamchibekov. A video posted the same day on the Internet shows trees lying on the ground still bearing ripened fruit. 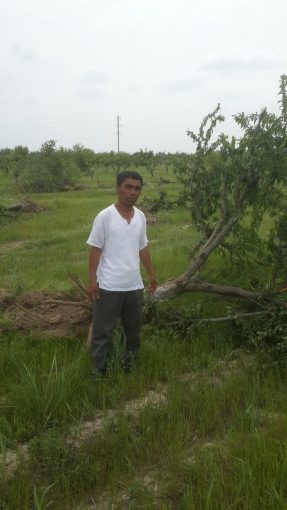 On May 9, Kamchibekov told Uzbek Forum that over the past five years he has been in dispute with the local authorities who have illegally taken over his land, leaving his successful farm in debt.

Kamchibekov’s farm was created in 2009. He had a lease agreement for 37 hectares of land for 30 years. In 2011, the farmer planted about 3,000 seedlings of plums and quince which yielded the first fruit by 2014.

In March 2014, Kamchibekov learned that by order of the district hokim, Jahongir Abdurazzakov, the hokimiyat had filed a lawsuit with the economic court demanding the seizure of his land. Since that time, the farmer has been desperately fighting for the preservation of his farm.

The story of the seizure of Sherzod Kamchibekov’s land is not unusual in Uzbekistan. In accordance with the law “On farming”, land can only be seized by a court decision but the decision is often made by hokims and subsequently secured in the economic court.

The basis of the hokimiyat’s lawsuit to seize Kamchibekov’s land makes use of the findings of a commission of March 6, 2014, which concluded that the land is in poor condition; that the farmer had not taken care of the land; and that the farmer owed outstanding taxes.

Kamchibekov says that the hokimiyat submitted false information to the court. “According to the law, I also had to be a member of the commission that reviewed the state of my farm, but I did not know about any commission. In addition, the hokimiyat is obliged to first send a warning letter and, if the situation does not improve, go to court next year. However, the process of my land confiscation was carried out with many violations. I took many documents to the court, showed photos of the mature orchard, brought extracts from the tax office to show that I regularly pay taxes and that there is no debt. But the court did not pay attention to the documents I presented and in 2015 the third court issued a decision on the seizure of the land.” 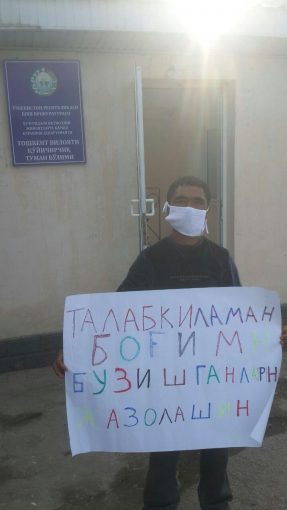 Sherzod Kamchbekov picketing near the District Prosecutor’s Office with a banner that says: “I demand to punish those who destroyed my orchard”

Studying the documents submitted by the hokimiyat, Kamchibekov discovered an obvious falsification. The evaluation committee composed of local officials included officials who had no positions in the organizations at the time. In his quest for justice, Kamchibekov turned to the prosecutor’s office and dozens of other departments to make the falsifications of the hokimiyat known.

In 2019, the district prosecutor’s office began an investigation into his case, during which the court decision to seize five remaining hectares of Kamchibekov’s land was suspended.

Nevertheless, before the investigation was concluded, the Kuyi-Chirchik district hokimiyat sent bulldozers and destroyed trees on 1.5 hectares of land on April 29.

“I wanted to plant vegetables between the trees. I bought pumpkin seedlings, tomatoes. We had already made a contract… They didn’t tell me anything. They just came and destroyed the orchard. Nobody called me or warned me. They still talk about food shortages (due to the Covid-19 pandemic) but it is the authorities who are destroying orchards. I borrowed money at a high-interest rate. I thought I would make money”, said Kamchibekov.

While preparing this article for publication, it became known that on May 11, the Senate of the Oliy Majlis of Uzbekistan passed the law to strengthen responsibility for the illegal seizure of land.

The Criminal Code is supplemented by article 173−1, according to which the illegal seizure of a land plot which was committed after applying an administrative penalty for the same actions is punishable by a fine, compulsory community service from 300 to 360 hours or correctional labor of up to two years.

Unlawful seizure of a land plot, which entailed the demolition of buildings, other structures, or plantings or parts on the seized land plot, without preliminary and full compensation for losses at the market value of the said property, and was committed after applying an administrative penalty for the same actions or causing significant damage, shall be sanctioned by fine, compulsory community service or correctional labor from two to three years, restriction of liberty from one to three years or imprisonment of up to three years.

For the same actions causing serious damage, there may be a punishment in the form of imprisonment from three to five years.