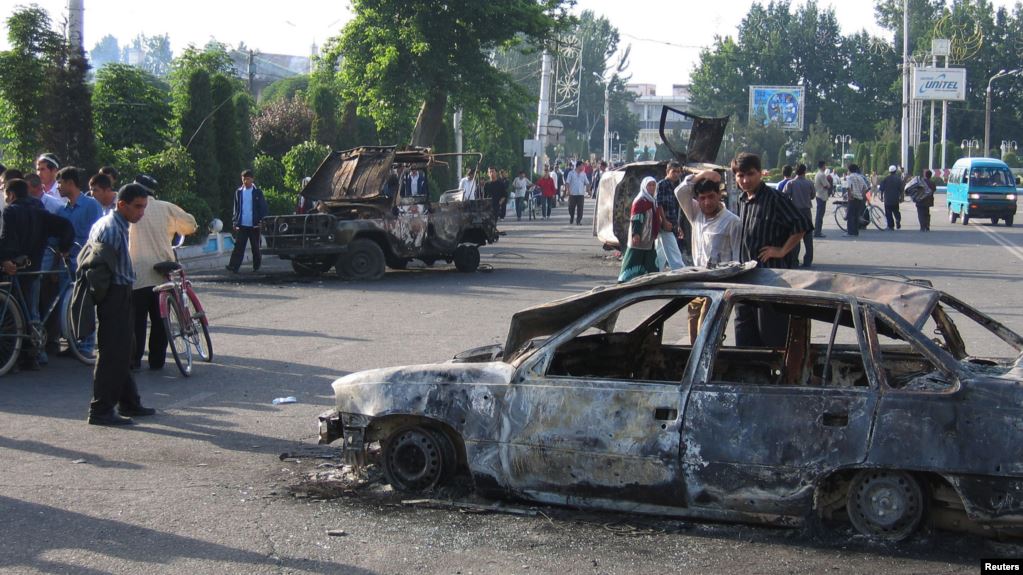 On the fifteenth anniversary of the Andijan massacre in May 2005 that killed an estimated 500 people, no independent investigation has ever been conducted. Those responsible for the shooting of civilians have never been held accountable. It seems the Government of Uzbekistan simply hoped that the events in Andijan would fade from memory.

The armed men who attacked government buildings and freed 527 inmates of the local prison, including dangerous criminals, are certainly guilty. They have served their time, and some are still serving sentences for their crimes. However, those who gave orders to shoot at unarmed people as they fled the carnage must also be named and put on trial.

The government of Uzbekistan accused the religious group “Akramiya”, led by Akram Yuldashev, of terrorist acts. He was in prison in May 2015 and later died in prison. According to the government, he controlled the attacks by telephone from his prison cell.

More than a hundred eyewitnesses of the events in Andijan who saw people dying on the streets, today live in Western countries. All of them decided to remain quiet and not stir up the past so as not to harm their relatives left behind in Uzbekistan.

Fifteen years after the tragedy, there is no detailed information on how the military unit and prison were attacked; why Uzbek forces decided to shoot at the crowd indiscriminately and killing them instead of using rubber bullets to disperse them; why they shot unarmed people fleeing for their lives; why they did not open a corridor to allow women, children and the wounded to leave the square; or whether Akramiya really wanted to seize power. There are so many questions, but still no answers. The role of President Islam Karimov and what kind of orders he gave when he arrived in Andijan on May 13, 2005 have never been revealed.

In 2006, the Prosecutor General’s Office of Uzbekistan issued the following message to international organizations:

‘The turning point was the visit of the Head of State to Andijan and the steps he took to restore order. It was this that made it possible, in the end, to minimize the number of civilian casualties and save the lives of the hostages who were in the hands of terrorists, as well as to localize the chaos and unrest. The presence of the country’s leader in the center of events actually predetermined the outcome and failure of the plans of external forces to undermine the situation in Andijan and to spread instability to adjacent territories.’

Does this mean that President Karimov gave the order to shoot at people who had gathered for the rally? Did he know that the vast majority of people who came to the square on May 13 did not participate in the armed attacks? That many of them had been waiting with hope and joy for their President to tell him about their woes?

The Andijan events were a turning point in Uzbekistan’s recent history. In 2002-2003, there was a sense that the regime was beginning to soften, with international organizations and independent media offices working in the country. This imaginary thaw ended abruptly after Andijan. Arrests began, international organizations were expelled from the country, and most journalists emigrated, ushering in a long, dark period of isolation from the outside world.

Trial in the Supreme Court of Uzbekistan

In September-October 2005, as a translator for Human Rights Watch, I had the opportunity to observe the only open trial held in the Supreme Court of Uzbekistan. Fifteen defendants, who, according to the investigation, were ‘particularly active participants in the crimes’, fully confirmed the official version of the events in their statements in court.

It was clearly a well-prepared show trial. Prosecutors, judges, witnesses, and defendants knew that everyone had their own role. Sometimes, sitting near the cell with the defendants, I tried to get a sense of their emotions, but it was impossible. Hour after hour, the defendants sat motionless with their heads bowed. During the entire session, the appointed lawyers did not have any questions for the defendants or witnesses. Even when Mahbuba Zakirova, the only witness who broke the silence and testified that soldiers shot at people to kill them, the defendants did not move, made no gesture, did not even look surprised. The defendants, as well as all those present in the courtroom, must have understood that what was happening had nothing to do with justice.

I remember a witness, a man no older than 25 years of age who was terrified. On that tragic day in May at an impromptu gathering in the square, this young man, like many others, spoke into a microphone, telling of everyday problems people faced. He was identified on videotape. When the judge asked him what he had been talking about, he answered that something inexplicable had happened to him and he wasn’t saying what he really thought, and in fact, he had a happy life and no problems.

It was the only open trial of those arrested in Andijan. All other trials of over 100 people who were arrested were closed for security reasons, according to the official version.

Official version of the event

According to Uzbek prosecutors, Kabul Parpiev was one of the leaders of the Akramiya religious movement and the main organizer of the Andijan uprising. The state’s version of events based on the official report, On the testimony of Kabul Parpiev regarding the organization and carrying out of terrorist acts in Andijan on 12-13 May 2005, states:

‘The terrorist acts carried out in Andijan were planned and organized by hostile foreign forces and are directed against the national interests of Uzbekistan and the independent policy of the Republic, with the ultimate goal of changing the constitutional order and creating an Islamic state.’

The report alleges that the Islamic Movement of Turkestan (IMT), transferred $200,000 through its representative in Kyrgyzstan to organize terrorist attacks in Andijan.

In April 2019, the former Minister of the Interior, Zokir Almatov, in an interview with a local website Qalampir, called the Andijan events the most painful moments in his professional life and complained about the unfair reaction of the world community. He also repeated the old version of a certain conspiracy against Uzbekistan, in which independent journalists were involved, who on the day of the uprising happened to be in Andijan. In fact, the reason for the presence of journalists of several Western publications in Andijan is quite obvious. Before the armed uprising, representatives of the Akramiya group held peaceful rallies in which hundreds of people participated. They demanded the release of 23 of their associates, influential businessmen in the city, whose trial was to begin in May 2005.

Karimov, who bears political responsibility for the disproportionate use of force in and the deaths of hundreds, is now dead and will never face justice. The new leadership of Uzbekistan has shown itself to be more open and has embarked on a reform program that has addressed some human rights issues, including the release of thousands of political prisoners. However, at a session of the UN Human Rights Committee in March 2020, the Uzbek government made clear that it has no interest in conducting a thorough and independent investigation of the Andijan uprising. It remains one of the darkest stains in Uzbekistan’s modern history.

To hear the stories of Andijan massacre survivors, see the documentary “Through the Looking Glass” by Monica Whitlock