Sandbags Added to Harvested Cotton in Andijan under Management’s Orders 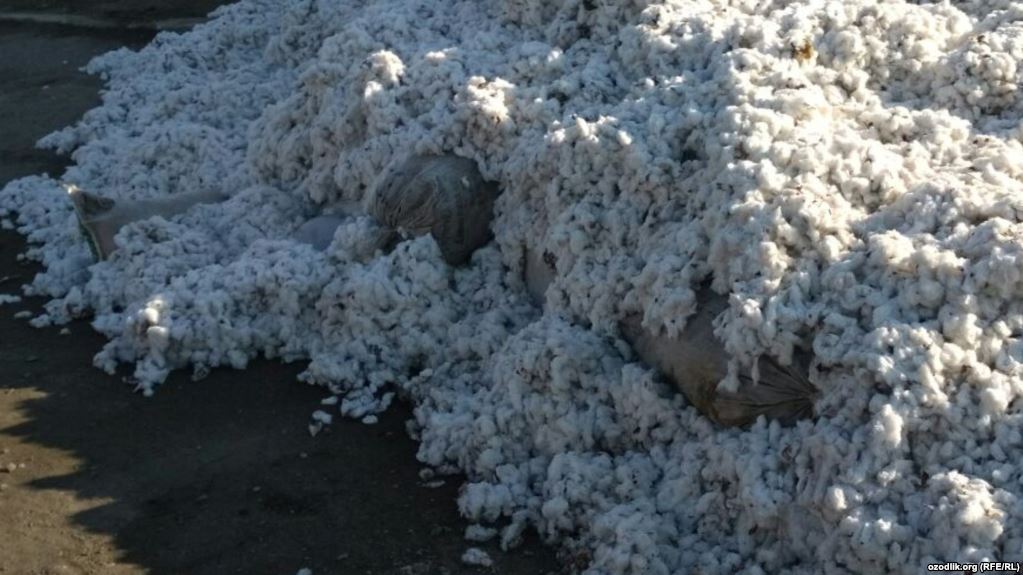 At cotton receiving points in the Boz district of the Andijan region in Uzbekistan, bags filled with sand are added to the harvested cotton to increase the weight. An “overstatement” of the cotton weight is carried out on the orders of the head of the district, Ozodlik’s sources report.

According to one of the workers of the Khavas cotton receiving point in the Boz district of the Andijan region, who asked not to disclose his name for security reasons, they have found sandbags among the submitted cotton for the entire week.

“We reported this to our management but their response was: “Do your job quietly. Do not interfere.” According to one of our leaders, sandbags are added to the submitted cotton by order of the hokim of the Boz district. Apparently, the head of the district had to do it in order to avoid insults from the regional hokim and to show that the Boz district had submitted many tons of cotton. Police officers, as well as the employees of other inspection bodies, are aware of this situation”, said the worker.

The Ozodlik reporter spoke anonymously to another worker of this [cotton] receiving point, who confirmed the words of his colleague.

“Terrible things happen here. In each trailer of the tractor loaded with cotton, we find between two and 15 sandbags. When we told the factory director about this, he told us that sand would be useful for the factory. But the heads of the [cotton] receiving point are worried about what is happening. They fear that all the blame will fall on them if the truth is revealed. We observed ‘overstatements’ in the past as well. But now, this is done in order to show that many tons of cotton were weighed.”

According to the worker, law enforcement officers who are responsible for preventing the “overstatement” turn a blind eye to the situation at cotton receiving points.

“To be honest, law enforcement officers stopped interfering. Rumor has it they are pressured to keep silent. It wasn’t like that at the very beginning of the cotton campaign. When Inspection officer, Shukhratbek and the Fire Department officer, Ilkhomjon found a handful of sandbags among the collected cotton, they reported this to their management and took some measures. And now, even they keep silent. When cotton is brought to our receiving point, they go outside and stay there until the weighing of the cotton is over,” said one of the workers of the Khavas cotton receiving point.

One of the heads of the plant in the Boz district who wished to remain anonymous, confirmed to Ozodlik that trailers loaded with collected cotton with added sandbags are arriving at the [cotton] receiving point.

“You can visit our [cotton receiving] point yourself and see everything with your own eyes. The sand is scattered everywhere at the receiving point. Nobody can argue with the hokim or the head of the police. It will all be revealed tomorrow and the heads of the cotton receiving points will be guilty. The hokim and the head of police will get away with it because they give verbal, not written orders,” he said.

On October 19, the Ozodlik reporter contacted Khumoyun Sodikjonov, assistant to the head of the Boz district, by phone. When asked about the “overstatements” at cotton receiving points, the assistant claimed that he was not aware of any such incidents. Sodikjonov asked the Ozodlik reporter to call him back in 15 minutes so that he could get the answer to this question from the head of the Boz district, Inomjon Mamadaliyev.

However, the Ozodlik reporter was later unable to reach the assistant.

“Overstatements” in the Uzbek cotton sector have taken place since Soviet times.

The original article by Sadriddin Ashur was published on October 19 on the website of Radio Ozodlik.