Teachers: Cotton is the most painful issue for us 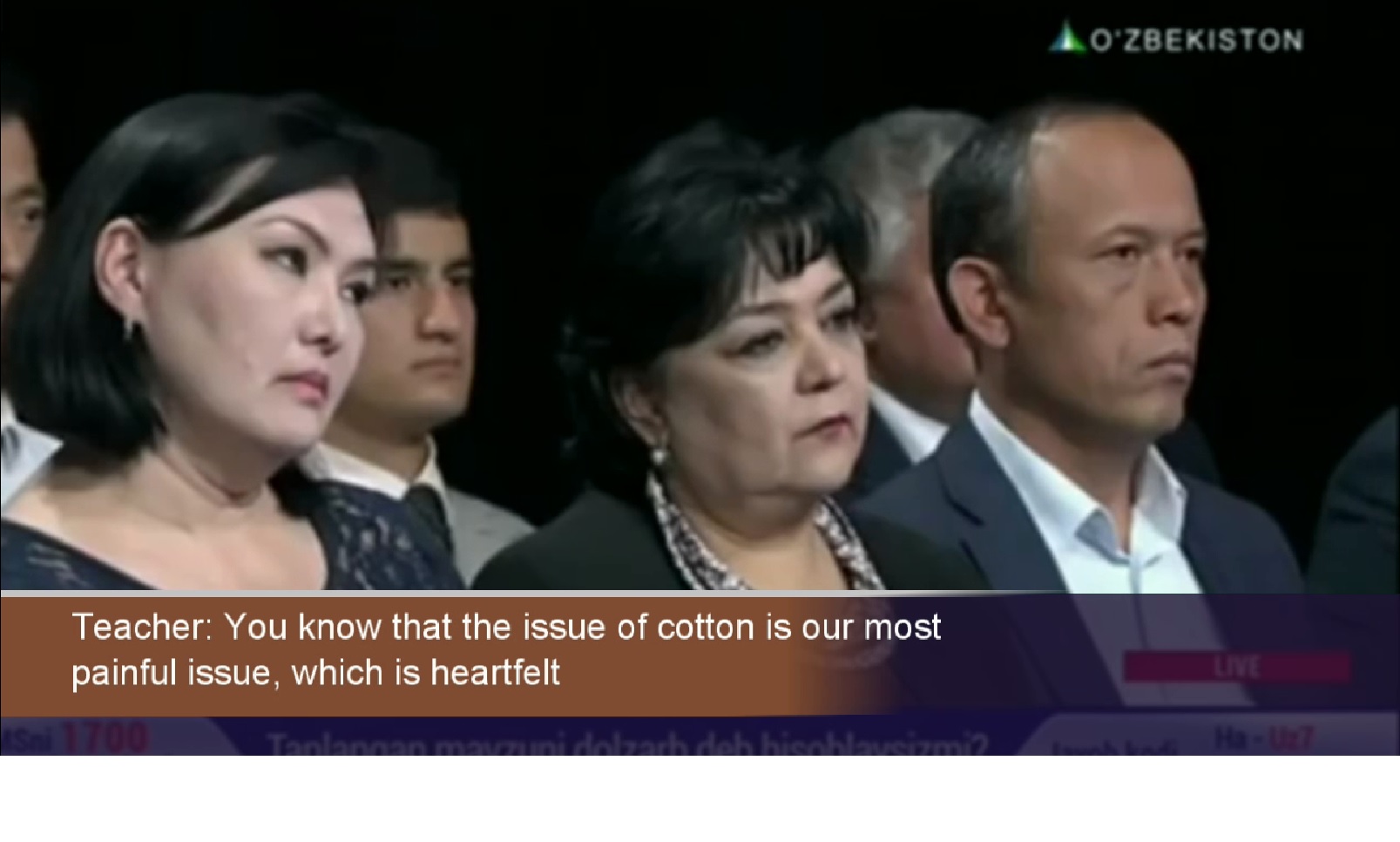 On April 21, the issue of forced labor among teaching professionals was discussed live on Uzbekistan’s main television channel. Speakers discussed a conference which took place on April 17, during which Prime Minister Abdulla Aripov severely chastised ministers of education and public health for forcing doctors and teachers to pick cotton, scrap metal, clean streets and carry out other “public” activities not related to their work.

Teachers and doctors have been forced to carry out work in agriculture and other spheres for the last twenty years, with the trend increasing from year to year. All the country’s leadership, including hokims, ministers and directors of schools and hospitals, are involved in the organization of forced labor.

A few years ago, state media claimed that unpaid forced labor was an honorable Uzbek tradition known as “hashar”.

President Mirziyoyev, formerly the head of two regions, also publicly acknowledged in one of his speeches in 2017 that public sector employees were forced to pick cotton without pay.

The topic of forced labor has been taboo for many years. Apart from human rights activists, no one had ever admitted the seriousness and magnitude of the problem.

However, it seems that a political decision was made to recognize that the problem exists. The Uzbek-German Forum for Human Rights, an organization whose focus is the eradication of forced labor in Uzbekistan, welcomes this decision.

Nonetheless, promises must be put into practice. Will the authorities stop compelling civil servants to perform work that is not part of their professional duties? If so, then it would prove that that the public statements of the prime minister are not just more empty words, but a political decision to end forced labor.

Moderator: How did the teachers perceive this (Prime Minister’s meeting on forced labor)?

Employee of the Institute for Advanced Training of Teachers: Teachers accepted this with great joy. I myself work in the institute for teacher training. This has become the subject of much discussion. The teachers are happy. They say, now we will breathe freely … We have become mardikors (hired workers), they say, ketmen (hoes) have become our diploma. They say, why can’t we carry out our actual work? Why should we sweep the streets, despite having skills in the field of public education? We are asked to hand over scrap metal. There is a compulsory subscription (for newspapers). Each teacher gives 300 thousand soum ($37). Teachers are responsible for every broken table and chair. Teachers are forced to look for sponsors among parents. Instead of all this, should we not give all our efforts and knowledge to the students? That’s what the teachers say.

You know that the issue of cotton is our most painful issue, which is heartfelt … It is what occupies the greatest amount of our time … but now our president’s calls, not to involve teachers in cotton, have not been fulfilled … this is a very offensive phenomenon. Teachers were freed from cotton. .. but.., there is still corruption behind it …

Employee of the Institute for Advanced Training of Teachers: For example, at least one month’s salary is withheld from each teacher. Even if the teacher does not have to pick cotton, he or she must give money. All teachers of the Tashkent region can confirm this. In other regions it can be the same situation. Why should we involve teachers? Teachers, instead of teaching, are working with ketmen (hoes), and dealing with bureaucracy.

What do teachers have in mind if their refrigerator is empty? If the salary is not enough (to live on) .. all our salary goes to utility payments. Each teacher pays 80 thousand soum for scrap metal…

Question from the audience: Still?

Employee of the Institute for Advanced Training of Teachers: Yes, still. Teachers are supposed to pay for recycled paper, for every broken window. Where is the help from the government?

Moderator: You said that you have to pay 300 thousand soum ($37) for a subscription. These are the newspapers. Our president previously did not say these things (about forced labor). Did these newspapers try to write openly about what was said at the meeting? It turns out that teachers are forced to buy flowers and plant them and participate in public works and improvements at their own expense.  Were these problems covered in the newspapers you were forced to buy?

Employee of the Teacher Training Institute: No, no. Of course, such things are not covered in the newspapers. Teachers do not mind buying newspapers. But, they say, why do we need unnecessary newspapers and magazines, what should we do with them? If we subscribe to four newspapers, they write about the same thing in all of them.