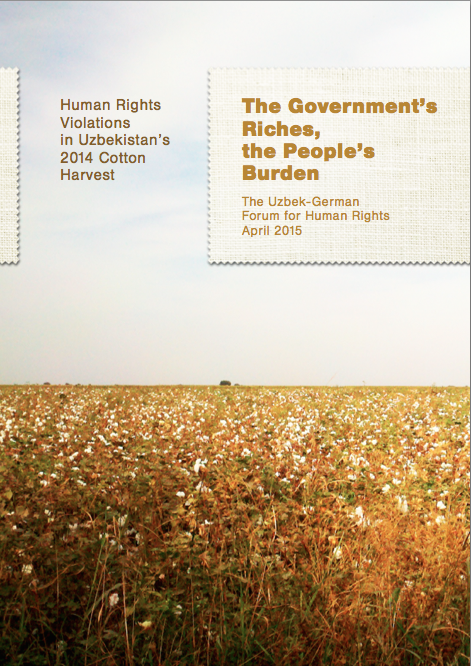 In 2014, the government of Uzbekistan forced more than a million of its own citizens to pick cotton, and officials extorted individuals and businesses, including multinational companies, at a larger scale as part of the annual Uzbek cotton harvest, according to a new report released by the Uzbek-German Forum for Human Rights (UGF).

The study of the 2014 cotton harvest also found an unprecedented degree of extortion of individuals and businesses that fueled the forced labor system, including keeping people in fields even though there is no more to cotton to pick so people are still forced to pay fees for food and board, etc., and setting unattainable quotas so people had to pay to make up deficits.

“The scope of the bribery is simply astounding,” said Umida Niyazova, UGF director. “At all levels of government, officials take their cut, and Uzbek citizens, particularly public sector workers are forced to pay or pick cotton through intimidation and fear.”

The Government’s Riches, the People’s Burden: Human Rights Violations in Uzbekistan’s 2014 Cotton Harvest documents the 2014 cotton harvest with data gathered by human rights monitors and interviews of hundreds of people forced to participate. The report finds that in 2014, more public sector workers were mobilized than in previous years, handicapping essential public services such as healthcare and education during the two months of the cotton harvest.

“Students and the sick suffer during the harvest time,” said Nadejda Atayeva, president of the Association for Human Rights in Central Asia. “Schools and health clinics cannot function with so many staff sent to pick cotton. Students cannot receive the quality of education that they deserve, and medical care is inaccessible to people, even when they are very ill.”

The increase in adult workers was, according to the report, to make up for a substantial decrease in the number of children forced to harvest cotton. However, monitors still found many 17-year-olds were forcibly mobilized with their schools, and officials resorted to forcing younger children to pick cotton in several incidents.

At least 17 people died during the harvest, the report found, and numerous people were injured, an increase from previous years. The report also documents brutal working conditions. Workers toiled in the fields for 10 hours a day with little rest and no days off, and their living conditions were often unheated, overcrowded, and lacking clean water and washing facilities.

The report found that widespread extortion characterized the 2014 harvest more than in previous years, with officials lining their pockets at every level. Authorities extorted contributions from businesses small and large, payments from individuals to avoid field labor, and payments from forced laborers for food, transportation, and unmet quotas. The government’s practices in the cotton sector, the report states, undermine rule of law and nurtures a culture of impunity. Two multinational companies – Telia Sonera and Telenor – admitted to making contributions to the harvest in 2014, claiming it is a prerequisite for conducting business in Uzbekistan, and employees of another multinational corporation, General Motors, reported for a third straight year that they were sent to pick cotton.

“We’ve long known about the human rights risk associated with cotton sourced from Uzbekistan, but these findings raise alarms for any company invested in Uzbekistan,” said Emily Kaiser, sustainability analyst at Calvert Investments. “As the Uzbek government feels more international pressure to end its forced labor system, the system is becoming more volatile and destructive. It seems to be increasingly difficult for any company in Uzbekistan not to support the forced labor system in some form.”

The Cotton Campaign supports the report’s recommendations to the Uzbek government: to permit unfettered access to international organizations, journalists, and independent civil society, and to undertake fundamental reforms of the cotton sector that would eliminate forced labor. As UGF notes in the report, it is also incumbent on Uzbekistan’s international partners, including the United States, European Union, World Bank and International Labour Organization, to use their influence to impress upon the Uzbek government the necessity of these reforms.

The Cotton Campaign is a global coalition of labor, human rights, investor and business organizations coalesced to end forced labor of children and adults in the cotton sector of Uzbekistan.

For more information on the Association for Human Rights in Central Asia, visit http://www.ahrca.org/