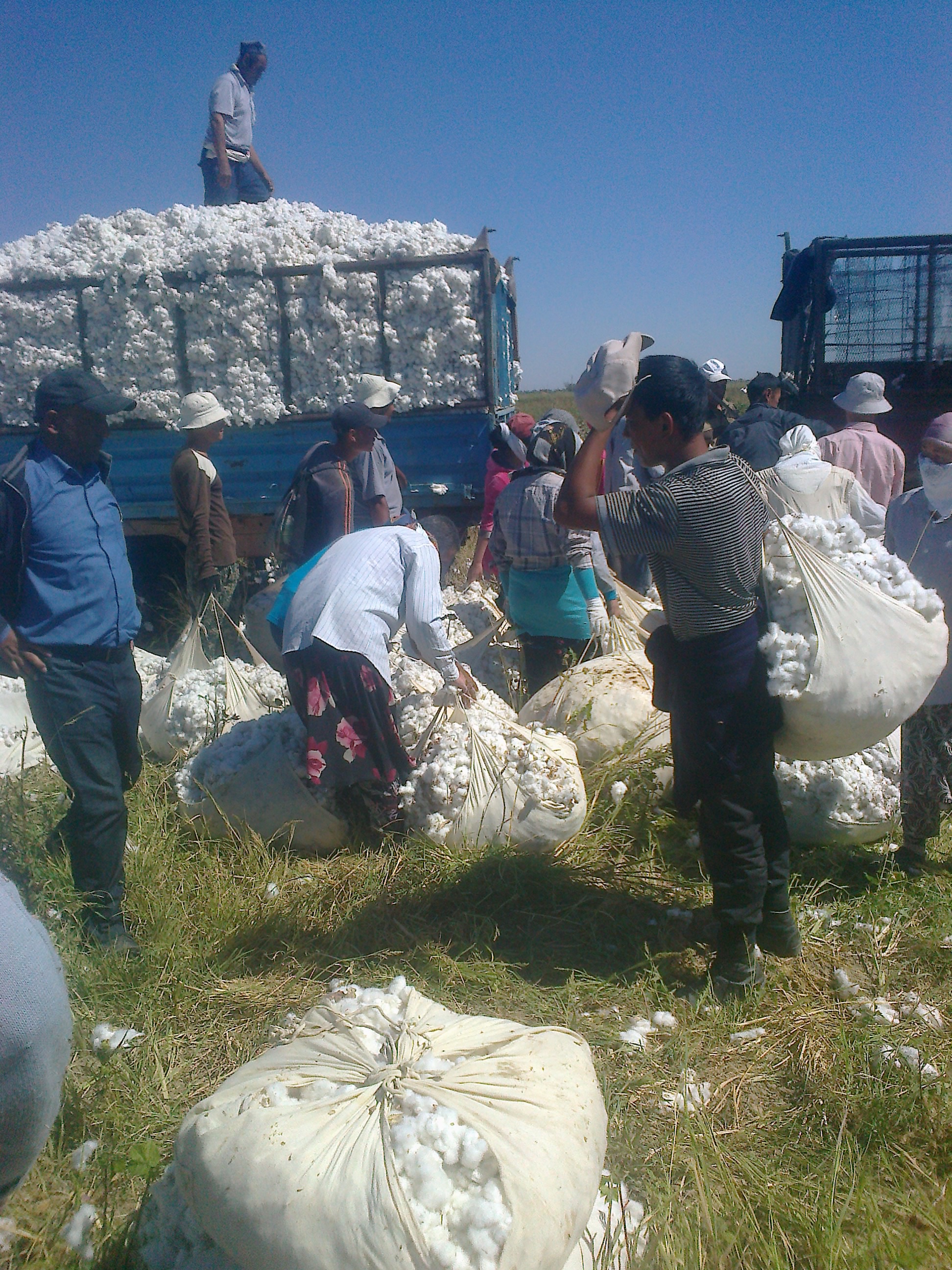 Farhod: At the beginning of the year [2014], they announced that we will work in the cotton fields. We pick cotton every year. Since cotton harvesting is every year in September, we all understand when it will be.

UGF: When were you sent to the cotton fields?

Farhod: The first group left on September 8. Three or four days later, we had a break. Everyone from our medical station had to go to harvest cotton. Only one to two doctors were left at the clinic on pro-forma duty. The rest went to work in the fields. We did not have enough people to work in shifts; therefore, we had to pick cotton from the beginning to the end of the season. When the last of us were returning it was snowing, the end of October. Doctors from our clinic were picking cotton for a month and a half.

UGF: Was cotton picking obligatory for everyone?

Farhod: It was obligatory for everyone. If one could not work, then they had to find a replacement. Therefore, sometimes a son, a daughter or another relative replaced them. Those who had the means paid seasonal workers to pick cotton instead of them.

UGF: If medical staff refused to pick cotton, what measures were taken against them?

Farhod: They were dismissed. If a replacement had escaped from a field, the employee for whom he or she was working was threatened with termination. They would say, “If the person who was picking cotton instead of you escaped, it is the same as you escaping. Come to work in the cotton field yourself, otherwise, you will be dismissed.” Then the college would either send another replacement or have the first replacement return.

UGF: How much money did the seasonal workers receive for picking cotton?

UGF: When did work start in the morning  and when did it finish?

Farhod: We woke up at 5:00 am. There were a lot of people; therefore, it was 6:30 am before everyone finished with morning hygiene and breakfast. At 7:00 am everyone had to be in the fields. For women, it was even more difficult then for us. They woke up at 4 am and went to the cotton fields before sunrise.

UGF: Where do they work?

Farhod: They are also doctors. The daily quota was 50 kg. Picking less was not allowed. Usually, we had to pick 60 – 70 kg. The quota was the same for 20 – 25 days. Thereafter it was reduced. Those who did not fulfill the quota were taken to the mat in the evenings. Police and the bosses scolded and threatened them. Sometimes there were also some children, they were threatened too.

Farhod: No, they were replacing a mother or a friend. There were also 15, 16, 17-year old students. Some days, they harvested cotton,  and after those who didn’t pick enough were admonished.

UGF: It was said that the children would not be at the cotton fields. When the bosses saw them, didn’t they say anything?

Farhod: No, they did not say anything. They only saw a number of people. One day there was a control. I don’t remember, from Qarshi or some other region. They asked if children were also picking cotton. The bosses said that there are no children. They continued this way, and the controllers did not return.

UGF: How much were you paid for cotton harvesting?

Farhod: How I can earn money? The salary for that month is kept in the office. The rest, we spend on food and beverages there.

UGF: Where were you living while working in the cotton fields?

Farhod: When we went out for the first time, there was an old building at the state farm. Everyone stayed there, both men and women. Three or four days later other pickers came there too. When the staff of medical centers of other villages joined, they relocated the men to the school gym.

UGF: What were the conditions?

Farhod: The conditions were like in the stall. We became “friends” with mouses and rats while living in the state farm’s old building. When we went to stay in the gym  we found out that those “friends” have “relatives”. Then we became “friends” with them too. You know, during the Soviet times there were places in the farms where domestic animals were washed. We did not have even this while staying in the fields. There were no showers, to say nothing of hot water. We went to the canal to wash. However, when it got colder, we stop washing at all.

The same with the food. In the morning, we got only tea with sugar. One loaf of bread was divided between three people. Everyone got a spoon of sugar. That was all we got for breakfast. We had to sustain this until 1 pm. Then we went for lunch. The lunch was also “great”. There was one big pot with one kilogram of meat, one kilogram of potatoes, half a kilogram of onions, one kilogram of butter, and the rest either rice or noodles, and that’s all for 40  – 45 people. The food was always the same.

UGF: How much money did they deduct from your earnings?

Farhod: 28 kilograms of cotton were deducted for the food. They were giving us soup every day. People had to eat something else. It is a good time for shopkeepers when people come to work in the cotton fields. Pickers run to the shop to buy something reasonable to eat whenever we get money.

The water was also unfit. The water in the desert is quite bad. We had to drink it every day. They either gave us crude water or were boiling it in the samovar. We drank it. When you work in the field you have to drink a kind of water. As I said, there were some children. It was especially difficult for them. If they wanted to leave the field to drink water, the police did not allow them. The policemen brought the children back. Water was a problematic issue.

UGF: What you would say, how did the cotton harvest affect the village medical center?

Farhod: A bad effect. Think about it; all staff members left a village medical center for cotton picking. Only one or two remained on duty. Is it possible for one or two to do the job of so many people? We have an emergency ambulance. There are different kinds of patients. There are old people. We have to visit them one to two times per week to measure blood, to ask about their health, or to give them injections. When we go to the cotton fields, nobody does this job. Our patients are left without care. If something dangerous happens and they bring a sick person to a big hospital, there are just a few doctors there too. Half of them are also in the cotton fields. If someone calls an emergency ambulance, it does not come. They explain it with the excuse to begin short on gasoline and ask the caller to bring the patient to the medical center. It has a very negative impact on our work.

UGF: Does the state require the staff of the village medical center to do other kinds of work?

Farhod: There are such mobilizations. We clean big roads. We have community cleanups. We grow silk moths if needed. In the spring they give us silk moths. If there is no space, we grow them at the home of one of our doctors. If needed, we also collect money to pay a colleague to grow it in his or her place.

2. The name of the district and the medical center are not stated, in order to protect the interviewee.↩