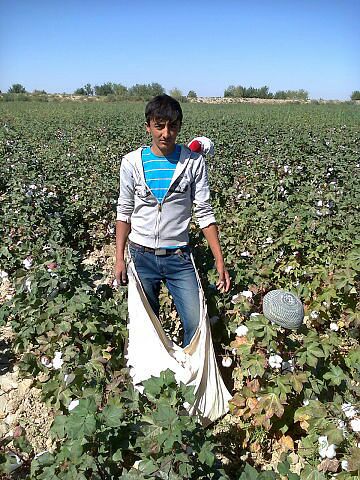 As you may know, Bayovut district is the largest contributor to our region‘s cotton quota. In order not to lose time and to make sure that our national wealth is not wasted, the 1st- and 2nd-year students were also mobilized to help. They were studying for several days at the beginning of the harvest,  but then they were sent to pick cotton. The study for 3rd-year students was ceased completely. The lessons for the 1s t-and 2nd- year students were not canceled completely; however, they were not conducted on a regular basis. After the cotton harvesting finished on October 24, both students and teachers return to their regular schedule in high school.

UGF: How many teachers from your high school were sent to pick cotton at any one time during the harvest?

UGF: Did teachers pick cotton or only oversee the students?

UGF: Who ordered the teachers to send students to the cotton fields?

UGF: Did anyone obtain permission from the students’ parents, that their children were allowed to go to work in the cotton fields?

Furkat: Permission? From parents? No, I’ve never heard that students were taken for cotton harvesting based on the permission of their parents. Is there any high school that sends students to the cotton fields with the parents’ permission? As far as I know, there is no such thing in our high school or other schools in our area. It is obvious that whether the parents agree or not the children have to go harvesting. If such permission would be requested, the number of students involved would sink. You know, if there were a possibility, parents in the villages would have their children help in their household or home gardens rather then sending them to the school. There is a lot of work, and it does not end.

UGF: What measures are taken towards the children who do not want to work in the cotton fields? By whom?

Furkat: This is in our power. For example, I was responsible to look after the children during the cotton picking. I am also responsible for the quote. If we were not strict with the children, they would waste time playing. We have to control them. But I have to say, the children are good. They hear what we say. If there are one or two who are stubborn, you have to be severe on them, and then they work harder. Nobody has yelled at the children yet. Everyone knows that cotton harvesting is every year routine, so we prepare ourselves for cotton picking.

UGF: What happens with teachers if they refuse to take part in cotton harvesting?

Furkat: Foremost, nobody died from work. Cotton is our national wealth. It is a yearly celebration. There is no use to turn our heads away from it. We live in abundantly. Moreover, our parents and grandparents grew up in the cotton fields and did not die from it. Hopefully, it will not kill us either. Sometimes, there have been teachers who skipped harvesting duties; they did not go to the cotton fields and disappeared for a couple of days. As a result, their relationship with the high school director was damaged. He distanced himself from those teachers, even though they had a good relationship beforehand. At faculty meetings, the director would address them saying: “If you work, then work right. You are not harvesting cotton from my private field. I also stay until midnight and take responsibility for every kilogram of cotton. If you do not want to do it, then write a complaint and go about your business!”

UGF: How many students from your high school went to pick cotton, approximately, in 2014?

Furkat: More than 800. In the beginning, there were only about 300 third-year students who were mobilized. The rest came to help later.

UGF: How many hours did the students work each day harvesting cotton?

Furkat: They worked from between 7 and 8  in the morning until 5 or 6 in the evening, approximately nine hours per day. During the first days of cotton harvesting, they had to work up to 10 hours. You see, I haven’t even thought about it. Actually, it is prohibited! Both teachers and students have the same working hours. There is no difference between them. At the end of the season, there were also days when we were worked for 4 to 5 hours because there was little cotton left in the fields.

UGF: What happened to the students who did not meet the quota?

Furkat: We teachers are responsible for the students’ fulfilling their quotas. After cotton picking, we organize meetings. We announce the names of students who picked the least and ask them to come to the centre. After that, we call the names of the students who picked the most and ask them to stand next to those who picked the least. Then we compare them in front of the other students. We intend for those who pick too little will feel peer pressure to pick more. Then the high school director meets with us, teachers. It’s irritating to us when he is yelling at us, whether in meetings or on the telephone. We also have to write reports if we don’t meet the quota.

UGF: Is there a quota that the high school or technical school has to fulfill?

Furkat: The mayor gives a specific plan to every high school. For example, during the first round of the harvest, when only 3rd-year students were sent to the fields, he ordered our school to deliver 12 – 15 tonnes of cotton. If we did not fulfill the quota, then we would be disciplined by our director. At daily meetings with the mayor, the director reports how much cotton the high school picked and whether it fulfilled the quota. I’ve heard that the mayor abuses- beats and kicks-  school directors who didn’t fulfill the plan. This is not a joke.

They paid 220 soum (approximately 5 US cents) for each kilogram of cotton. The students were paid in cash. No money was held back. The children had brought their own food and ate their lunches in the cotton fields. They prepared it themselves and brought it with them. There was no catering in the fields.

UGF: Did teachers and students return home every day after picking cotton,  or did they stay overnight near the fields?

Furkat: There were no places to stay overnight. Everyone traveled from home every day.

UGF: What is your personal attitude to this issue? Do you wish that students and teachers were in the classrooms this time of year, or do you prefer that they participate in the cotton harvest?

Furkat: Of course, I wish they studied. Education is the most wholesome activity for them. But it’s ok if they have to pick cotton. The most important thing is that they do not waste time. Generally, I am not against cotton harvesting. It is our economic wealth. However, if it were ok, it would not have a negative effect on the educational system.

UGF: Was the curriculum shortened because of agricultural work?

Furkat: For 1st– and 2nd-year students, it was not shortened. Between their work in the fields, they were returning to school and received summarized consolidated lessons. However, the curriculum of 3rd-year students was shortened. In any case, they catch up during the winter, when they have shorter holidays. It is not a secret, that mobilization to agricultural work deteriorates the quality of education. Both the lessons and the topics are not taught properly during the cotton season. Later it becomes evident that the students didn’t master the lessons given at that time.

UGF: What do you think, why are students and teachers forced to work in the cotton fields?

Furkat: Because they are regarded as the main workforce. Public institutions financed from the state budget are obliged to comply with any order. Moreover, the number of teachers and students is much greater than the number of staff of other public institutions, so it is possible to involve more people [from schools]. Let’s say, if there are four banks in one district, it is possible to involve only 100 employees, but it is possible that there are 70 schools and high schools in the same district, and each one can bring 100 people on the cotton fields.

UGF: Can you tell us more about your work?

Furkat: I have worked at the high school for several years. My monthly salary is sufficient for me. I get 700,000 soum (approximately $175). Half of the salary is paid in cash, and the other half is deposited into my bank account. Since I have little experience, I do not get any bonuses. Now, I want to do more. Teachers who have good results get bonuses. The bonuses are 10% to 45% of the monthly salary.

UGF: How well does the heating system work in your high school?

Furkat: In the winters the gas is completely switched off. What kind of heating could there be?

UGF: In your opinion, what is the most significant concern at your high school?

Furkat: For now, it is the heating. Now [autumn]it is not very cold outside, and it is colder inside the building. In the winter it will be even colder. When we go home, it is the same. There is always a problem with the gas and water supply in Bayovut. People prepare food over fires both in the summer and winter.

UGF: In all, how many days are students and teachers sent to work in the cotton fields?

Furkat: It could be 40 – 50 days during the cotton harvest.  During the season of field preparation, we are involved for 15 – 20 days.

UGF: Do you know the Uzbek laws concerning child labour?

Furkat: This year [2014] they told us not to involve students under 18, based on protecting children’s rights. However, they still worked in the fields. Of course, they did not have to work the whole cotton season, but they were involved.

UGF: Do you know the Uzbek laws regarding forced labour?