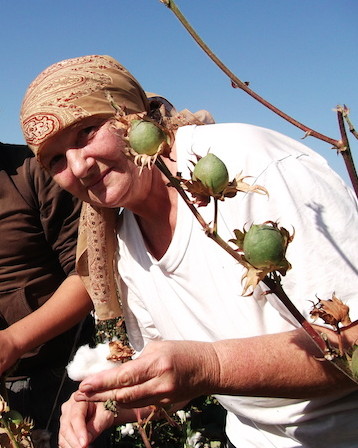 Representatives of the Human Rights Alliance of Uzbekistan – Elena Urlaeva and Shukhrat Rustamov – were refused permission by the Uzbek authorities to travel to South Korea where they were to receive the Tji Hak-Soon Justice and Peace Foundation Award at the official ceremony on March 11th.

With all my heart I congratulate the Human Rights Alliance of Uzbekistan and its leader Elena Urlaeva for receiving the Tji Hak-Soon Justice and Peace Foundation award.

I firmly believe it is difficult to find a more deserving group of people to receive the award for justice and peace. For many years, the Human Rights Alliance of Uzbekistan has worked in the name of human rights, freedom, justice, and peace in Uzbekistan.

To protect human rights in Uzbekistan is dangerous and difficult work. Today in Uzbekistan, a country with 31million people, there are no more than 20 people openly advocating for the protection of human rights. Since 2005, after the massacre in Andijan city, the government forced all local and international organizations working on human rights to close. The government’s systematic persecution of civil society activists has continued. It is an ongoing, daily struggle invisible to most of the world, between Uzbek authorities on the one hand and human rights activists, independent journalists, and anyone who dares to criticize this government on the other.

I have known the leader of the Human Rights Alliance of Uzbekistan, Elena Urlaeva, for more than 15 years. I met her for the first time when she was demonstrating outside the Prosecutor’s Office in Tashkent. As usual, she was standing there holding a sheet of paper that read: “I demand justice.“ She was demanding justice and peace for the innocent, condemned victims of state repression.

Suddenly, she was approached by a young strong man, clearly from the security service. With all his power, he hit her in the stomach. Elena bent in pain, and it seemed to me that I also felt the pain experienced by Elena. It was harsh violence against a peacefully standing woman, and this gross act of violence was under the eyes of the police. None of the police officers responded to the violence. Everyone knew that the man who hit Elena was a thug of the government.

After some time, in spring 2002, I went to see Elena in the psychiatric hospital, where she was forcibly placed. When I asked the doctor for the reason why Elena was in the clinic, the doctor said that she had dressed in religious clothing and demonstrated outside the Ministry of Justice demanding the government stop persecution of people because of their religion.

For officials who are now in power in Uzbekistan, a man or woman who selflessly protects not himself or herself, but the rights of others, who is willing to risk his or her health and life for the freedom and justice of others, such a person is – according to them – insane, and therefore it is necessary to isolate and treat them in a so-called “psychiatric hospital”.

In 2007, when I was imprisoned myself, Elena stood outside the court with her 3-year old son and demanded my release. The courage and bravery of Elena Urlaeva give hope and strength to all other human rights defenders in Uzbekistan and around the world.

I thank the Tji Hak-Soon Foundation for recognizing the brave members of the Human Rights Alliance of Uzbekistan with this award and hope that this support and partnership with the civil society of Korea will continue and contribute to the goals of justice and peace in Uzbekistan.