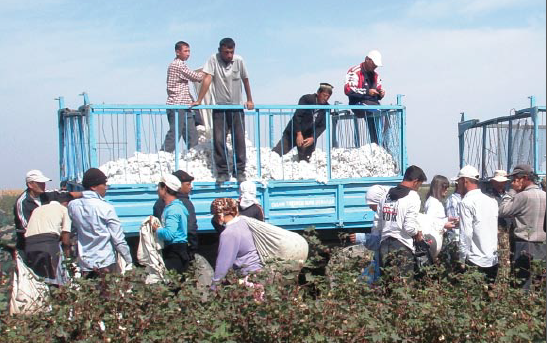 Today, the Uzbek-German Forum for Human Rights and the Cotton Campaign released  SystemicProblem-ForcedLabour_Uzbekistan_Cotton_Continues

Excerpt from the Executive Summary:

“The Government of Uzbekistan has for decades relied on the forced labour of children and adults as a central component of the state-driven cotton production system. In 2012, the Government of Uzbekistan entrenched the use of forced labour in its cotton harvest. A shift in the demographic targeted has rooted the practice even more deeply in the country’s political economy, as an unprecedented mass mobilization of teenage children, university students and both public-sector and private-sector employees accompanied an apparent reduction in the mobilization of children under the age of 15. The Government failed to take steps to end the state-sponsored forced labour system, denied the practice existed, and steadfastly refused to cooperate with the International Labour Organization (ILO). Government authorities also continued to repress citizens who reported the on-going use of forced labour of children and adults. This report presents evidence gathered by human rights defenders in Uzbekistan on their government’s system of forced labour during the 2012 cotton production cycle. Claims of progress ring hollow in the ears of the children and adults of Uzbekistan who again were forced to pick cotton by the government authorities.”

“This report is also a call to action to governments and companies to use their leverage to urge the Government of Uzbekistan to end forced labour in its cotton sector. The final section presents recommendations to governments with significant interests in Uzbekistan—including the United States, Germany, South Korea, the United Kingdom and the European Union; the private sector—including companies operating in Uzbekistan and companies using cotton worldwide; and international financial institutions.”

“These recommendations derive from the premise that stability and rule of law are in the interest of governments and the private sector alike. In deciding to take a stand against forced labour, governments and companies should consider that political change will eventually come to Uzbekistan and that the people of Uzbekistan will long remember if the world did everything possible to end their servitude.”