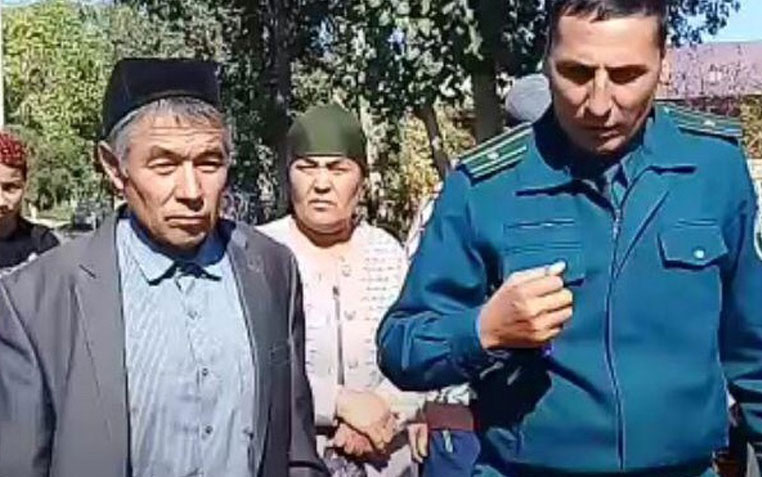 (Washington, D.C.) –The Cotton Campaign calls on the Uzbek government to drop criminal charges against Mahmud Rajab, a poet, journalist, and human rights defender, whose trial on contraband charges is set to begin Thursday. The government should also stop interfering with independent reporting on human rights issues, including forced labor. Over the last month, at least three people – Rajab; Davlatnazar Ruzmetov, a journalist; and Nafosat Ollashukurova, an activist and blogger – have faced harassment or interference, including arbitrary detention, politically-motivated criminal charges, and forced psychiatric treatment. In addition, a criminal investigation has been opened against Malokhat Eshonqulova, a journalist and activist who has monitored forced labor. The Uzbek government has made significant reforms to combat systemic forced labor in the cotton sector, which risk being undermined by continued harassment of human rights monitors and journalists.

This persecution of activists and journalists occurs as the annual cotton harvest, which has been consistently linked with human rights abuses including state-organized forced labor, is in full swing in Uzbekistan. The government has made public commitments to allow free access to independent monitors, independent civil society activity and freedom of the press to report on forced labor during the harvest. Rajab, Eshonqulova, and Ruzmetov have all monitored or reported on forced labor.

“Uzbekistan is at a turning point in its reform process— it can turn a new page and embrace a free society or it can attempt to develop its economy without dismantling the authoritarian system of its past,” said Rudy Porter, regional program director for Europe and Central Asia at the Solidarity Center. “Uzbekistan’s international partners who have been voicing support for the economic transformation in Uzbekistan should now speak out just as loudly in support of civic activists under threat.”

“Harassment and persecution of some activists, journalists, and bloggers have a chilling effect on all of civil society,” said Umida Niyazova, UGF director. “It’s one thing for the government to say that there are no restrictions on activists, but when it locks people up or forces them into psychiatric ‘treatment’ for speaking out, it sends a very different message.”

In June, at the invitation of the government of Uzbekistan, the Cotton Campaign released a Roadmap of Reforms to end forced labor in cotton production and establish the conditions needed to make reforms sustainable. The core objectives outlined in the Roadmap are: end systemic forced labor; enact structural reforms; and empower civil society. The Cotton Campaign called on the government to end harassment and reprisals against activists and journalists.

“We view the creation of an enabling environment for independent civil society in Uzbekistan as key to dismantling forced labor and every bit as crucial as other reform efforts,” said Bennett Freeman, co-founder of the Cotton Campaign. “Having a truly independent and empowered civil society is fundamental to promoting transparency and accountability. It also means tolerating a range of views, including those critical of the government.”

The Cotton Campaign is a global coalition of human rights, labor, responsible investor, and business organizations dedicated to eradicating child and forced labor in cotton production.

The Uzbek-German Forum is a Berlin-based NGO dedicated to improving the human rights situation in Uzbekistan and strengthening and promoting civil society.

The Solidarity Center is the largest U.S.-based international worker rights organization helping workers attain safe and healthy workplaces, family-supporting wages, dignity on the job and greater equity at work and in their community.

Civil society Despite engaging with some civil society activists on forced labor, the government has stopped short of allowing independent groups to form and conduct their own activity free from government interference and oversight. The government has yet to register any independent human rights organizations since 2003 and has twice rejected the registration application of a group called Restoration of Justice, which supports victims of wrongful imprisonment. The government has slightly eased some financial regulations on NGOs by lifting the requirement that they keep funds in one of two state banks. Other restrictions remain in places, such as the requirement that NGOs coordinate in advance with the government for any meeting or activity.

Mahmud Rajab faces up to ten years in prison for possessing books critical of the Uzbek government. Rajab, a poet, journalist, and human rights monitor from the Khorezm region, in northwest Uzbekistan, was stopped at customs when he arrived in Tashkent on a flight from Istanbul on March 26, 2019. Customs officials seized his phone and 18 books by Muhammad Solih, the leader of Erk (Freedom), an independent political party banned in Uzbekistan, and eight copies of Beyond Fear, a book by journalist Muhammad Bekjan detailing his years of torture and imprisonment. Rajab also had a digital copy of These Days, by Uzbek writer Nurullo Otokhanov, copies of which are readily available on the internet.

Police subsequently searched Rajab’s home and seized additional books. Authorities opened a criminal case against Rajab and sent the seized materials for expert analysis, which found that These Days contains “biased opinions” about the social-economic and religious situation in Uzbekistan, citing as evidence statements in the book critical of government corruption and authoritarianism, such as “The head of the state is accountable to no one and to demand accountability from him is considered a sin.” The expert opinion of the books by Muhammad Solih found that they do not contain extremist ideology but are critical of the rule of previous Uzbek President Islam Karimov, and contain “only negative views and no positive remarks.” The expert concludes that “the books cannot be distributed because they could negatively influence the minds of youth.” Based on these analyses, Rajab has been charged with violating the contraband laws, article 246 of the Criminal Code, which prohibits bringing materials into Uzbekistan “propagandizing religious extremism, separatism, or fundamentalism.” The charge is punishable with five to ten years’ imprisonment. A trial date has been set for Thursday, October 17, 2019.

On September 22, accompanied by relatives and supporters, Rajab set off on a protest march to Tashkent to seek an audience with the minister of the interior. He was stopped the same day by police, roughly pushed into a van, and sentenced to 10 days’ administrative arrest. Rajab was released on October 3. He described the conditions of his detention as “good” and said he did not experience any threats or pressure. Rajab has monitored forced labor and child labor in Uzbekistan for more than 10 years, including with UGF.

Nafosat Ollashkurova, who has about 4,000 followers on Facebook where she publishes posts about issues of local corruption and property rights, was committed to the Khorezm regional psychiatric center on the orders of a judge. This followed her release from 10 days’ administrative arrest for hooliganism, resisting an officer, and creating the conditions for an unsanctioned gathering. Ollashukurova had accompanied Rajab on his pedestrian march and filmed his arrest. Ollashkurova’s relatives found out that she had been committed to the psychiatric clinic when they came to pick her up at her scheduled release from administrative arrest and discovered that she was not there. Ollashkurova was previously arrested on January 9, 2019, and served five days’ administrative arrest for participating in and filming a demonstration of women at the Senate building in Tashkent.

Davlatnazar Ruzmetov, a Khorezm-based journalist, has written about the cases of Rajab and Oshukurova. He said that after he left his home on October 5, he was approached by a woman he did not know who appeared drunk and began to shout at him. Two policemen nearby then approached and accused Ruzmetov of hitting the woman. They took him to the police station where he was detained for five hours and questioned about why he was speaking out on behalf of Rajab. He received a summons for questioning again on October 12, after he published an article about Ollashukurova.

Malokhat Eshonquolova, an outspoken journalist and human rights defender who has monitored forced labor, has left Uzbekistan, fearing arbitrary arrest. Eshonqulova faces criminal charges of defamation and slander in retaliation for a video report she published on April 11, 2019, alleging corruption by Alisher Abduganiev, hokim of the Zaamin district of the Jizzakh province. The report alleges that the district administration improperly ordered the confiscation and partial demolition of a house belonging to a resident of Zaamin, noting serious conflicts of interest surrounding the decision.

The Ministry of Internal Affairs announced publicly that it had opened a case against Eshonqulova for slander and defamation on June 3, on the basis of a complaint from Abduganiev although legally, these charges can only be brought following administrative discipline for the same offenses. On June 11, an officer from the counter-terrorism department came to Eshonqulova’s flat on a pretext of speaking to her about another case. When he arrived, he handed her a summons to appear immediately at the police station in Tashkent and brought her to a waiting car with two men in it, who said they were taking her to Zaamin, 200 kilometers from Tashkent. They refused to allow her to use her phone during the trip or to alert relatives. In Zaamin, an investigator informed her of the case against her and allowed her to return home. If charged and convicted, Eshonqulova faces up to three years in prison.