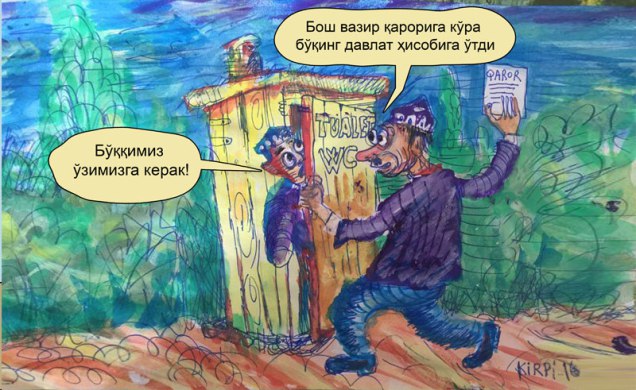 The Prime Minister of Uzbekistan has ordered more than thirty employees of the Sanitary Epidemiological Station (SES) in the Uchkuprik District of the Ferghana region to go from house to house of local residents and collect cow dung. It is reported that the collected manure will be used to fertilize the local farmers’ lands. The residents are unhappy with the government’s decision. They say that they were suffering from the constant shortage of gas and electricity and needed the manure for themselves since they use cow dung as a solid fuel for kindling the hearth and oven.

According to a source of Radio Ozodlik (Uzbek service of Radio “Liberty”), each family in the Uchkuprik District was asked to provide two bags of cow dung.

„Yesterday, two employees of SES came to our home, together with a mahalla posbon (guard). They went to our yard and asked how many cows we held. I said that we had two cows. Then they said to me: “You have to give us two bags of manure, carry them out, our people take them away.” I asked: “In the winter we have no gas, no light, and now you want to take away the manure that we use to fuel the stove?”

A resident in the village of “Katta Kenagas” told the radio reporter that the local people were having a hard time as each of them had to give two bags of cow dung to the authorities.

„In our area, it is not so easy to keep cattle. Sheep and cows are kept in the yard because there is no place in the fields. From the two bags of cow manure, we can make 200 Kizyakov. In the village, there is no gas, no light. 200 Kizyakov is enough for heating the house for 10 days. But the funny thing is that this task was assigned to employees of SES. It looks very pitiful when medical experts in their professional clothes go from house to house and ask the people for dung. The whole mahalla is laughing about it”, said a village resident.

One of the “Katta Kenagas” mahalla representatives confirmed the information Radio Ozodlik had obtained.

„We received an order from the Khokimiyat. Yesterday, a large group of SES employees came. People took away bags with manure and put them at the door, to later be taken away to farmers on their tractors”, said a mahalla activist.

An officer from the Uchkuprik district who did not submit his name told Radio Ozodlik that the staff of the sanitary and epistemological stations had performed this task on the order of the Prime Minister of Uzbekistan.

„In my hands, I hold a resolution of the regional governor. Based on the instructions of the Prime Minister of the Republic, the export of fertilizers for farms, barns, and cleaning latrines, as well as the disinfection of these places are assigned to the SES staff. They provide the local mahalla with fertilizers, which, in turn, sends them to the farmers’ fields”, – the local administration officer told Radio Ozodlik on the phone.