Interview with a teacher (46) at the Medical College (city disclosed) 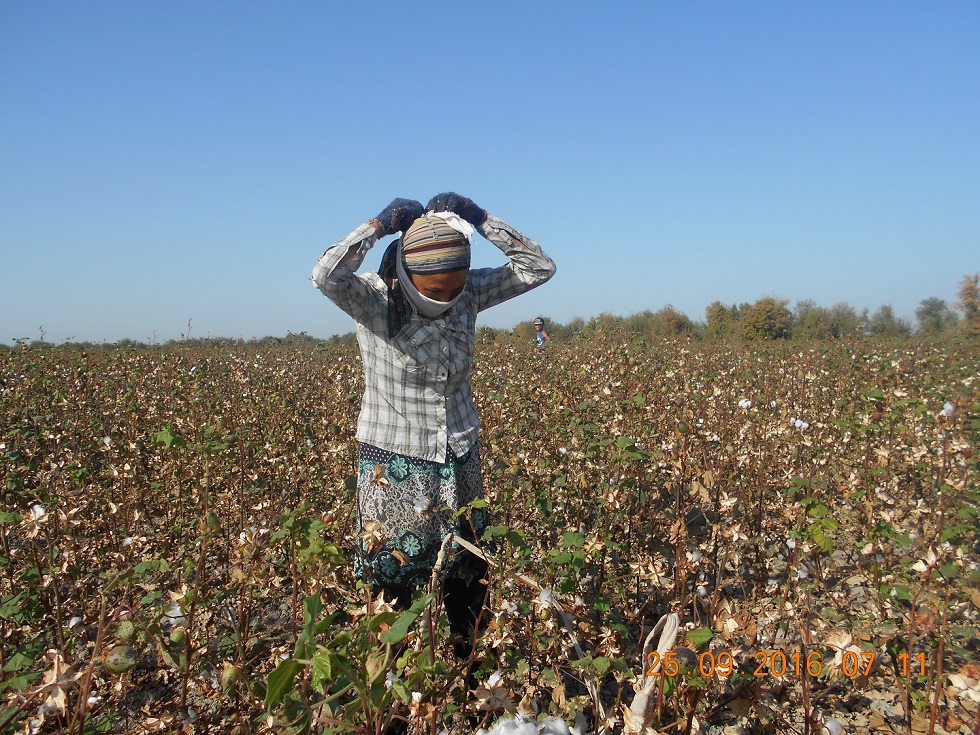 In this interviews names of cities and people won’t be disclosed in order to protect the identity of the interviewees.

“On September 5, 2016 we all gathered in the square to lay flowers next to the portrait of our president, who had died just a few days before. On the same day we started hearing more and more about the cotton harvest. In the afternoon of the same day, all teachers and employees were asked to attend a meeting at the college. We discovered that the first unit was to be mobilized to pick cotton on September 6. It was also announced in advance who was to be included in the first unit. In total, 3 units of 20 people each were organized. I decided to join the first unit, as the weather was still warm. We picked cotton from September 6 to November 1. 3rd year students from our college picked cotton for 15 days, from September 30 to October 15. As for the 1st and 2nd year students, they were allowed to stay here and study.

20 employees from our college were sent to pick cotton on a live-in basis, while others travelled to the cotton fields on a daily basis. Only 20 teachers were left in the college to run classes. Teachers were separated from students while picking cotton. Students were supervised by the college director’s assistant, a Methodist teacher, and other 8 head teachers.

As far as we know, it was the regional Khokim who signed the order to send people to pick cotton. In fact, there have been rumours about the cotton harvest since August. We learned more about it as we were involved in the preparation and were responsible for organize food supplies for those who would stay at the cotton camp. Our salaries were cut by 30 thousand Uzbek Som in order to contribute to the harvest.

The mobilization of students turned out to be more difficult and caused a lot of scandals. Most of the parents tried to prevent their kids from being sent to pick cotton. Teachers were forced to visit all parents individually to persuade them to send their children. Teachers tried to explain that this is a state level order and the entire cotton had to be picked. Some parents who work in public institutions were threatened with being reported to the prosecutor’s office.

There were also some students who did not go to pick cotton. These were the children of those parents who are not employed in public institutions. How were they going to be punished? It was hard to track them down as they were avoiding teachers and college staff. Sometimes, we were forced to pay several visits to their homes. It was much easier with the employees from the public sector, because we were able to threaten them.

In the end, 193 out of 225 3rd year students went to pick cotton. Nothing will happen to those who did not go to pick cotton. However, their parents will be questioned in the prosecutor’s office. I am not sure how this process will look like, but they will be certainly threatened.

Teachers go to pick cotton without any resistance, so to speak. They do not want to lose their jobs as they have a more or less stable salary. If they refuse, they won’t be given as many classes as before and will earn less money. The college director can start picking on the teachers and keep searching for wrongdoings. Eventually, the teacher will be forced to resign. Those who avoid picking cotton are treated as unwelcomed and are not respected in the team. We have some employees who report those who avoid picking cotton at every meeting. They also sometimes propose to cut their salaries and bonuses.

There are also rich parents who pay money to free their kids from picking cotton. I know at least one of them. He manages a company dealing with foreign investments. I know that he promised to buy four computers for the college in order to free his daughter from picking cotton. However, after a while these computers disappeared somewhere.

I did not pay anybody and I went to pick cotton. I have no husband and cannot afford extra expenses. But there are teachers who pay 100 US dollars to free themselves from picking cotton.

Nobody is freed from cotton picking in case if illnesses. If a worker is ill or pregnant for example, then he or she is obliged to hire a worker and pay him for the job.

Every year our students collect cotton. The live-in area is the same every year, and it is located in the building of the local school which is not far from the field itself. This year I was appointed as a supervisor and supervised students for a week. The supervisor asked me to replace her as her daughter was getting married. We walked approximately 1 km to the field with the students every day. The students picked cotton from 8 am till 5 pm.

The students were allowed to rest for 3-4 hours during the day just once a week. We did it, so that nobody knew. There were mainly girls in the group, and only 15 boys. If the girls were not taken care of, they would get ill quickly. And then we would have to report to their parents.

The daily quota was 50 kg. Our students are still young, mainly 17- and 18-year-old kids. Initially, it was 60 kg. But we persuaded them to reduce it a little. Teachers, on the other hand, had a 60 kg quota.

If a student fails to fulfill a quota, no action is taken against him, to tell you the truth. What can they do? The fact that they are forced to pick cotton is itself a violation.

Students are supposed to take care of their lunches and dinners on their own, which means that they pay their food with the money they make from picking cotton. Each student is supposed to pick at least 38 kg to be able to pay for food. The rest is paid in cash.

It is good that they were sent to pick cotton for 15 days only this time. They did not suffer a lot. Some rich parents were able to bring a lot of food when they came to visit their kids. For instance, 10 kg of meat, pasta, rice, potatoes, watermelons and melons. Every 2-3 days a wok full of pilaf was brought to the camp (10 kg of pilaf can feed 70-80 people.) Another entrepreneur sent 100 flatbreads every day. As you can see, we had enough food. But, they still deducted money from the compulsory 38 kg to pay for food. But in reality, parents were feeding their kids.

We were all paid 268 Som for each kilo of cotton we picked. Many students could even put some pocket money aside. Some of them were able to make much more money – 50-60 thousand Uzbek Som ($9). Last year, good cotton pickers were given cotton oil as a present. But this was not the case this year. The reason for this was corruption (again). Our management, the director, his assistant, and 5-6 other people took the oil and divided it among themselves. Each of them received 30 kg of cotton oil for free. I was shocked.

Those who picked cotton without staying at the camp took daily buses to travel to and from the cotton field. The bus was provided by the college.

As already mentioned, students were sleeping in the school building. We had to care for our living conditions on our own. Parents also brought electric heaters for each room as soon as it started to get cold. Conditions for teachers were worse. I stayed at the camp from September 6 till September 21. Our accommodation was situated in the old building of the local club. Water leaked into the building from the roof. Then, we moved to the makhalla (local micro-district). My colleague’s relatives live there. They had a big house, so a few of us (teachers) stayed there. Those who were forced to stay in the club building suffered a lot. They had to use a toilet in the neighboring kindergarten as they didn’t have their own.

We were allowed to use the shower in the house we were staying at. Those who stayed in the club building had to go to the public bathhouse once every 5 days. And it is not for free. The college hired a cook to cook for us every day. It was quite delicious. Of course, it was cooked in the field. Dinner was cooked in the same way, but delivered to the camps. We basically paid for all the food by our own.

To tell you the truth, I am against this. Students must study. They keep claiming that all the other students were in college and were not forced to pick cotton. This is not true! If we, teachers, are forced to pick cotton, who would then teach students?! We had no classes during the whole period. 1st and 2nd year students pretended to be studying. But in fact, there were no classes at all. Sometimes, they were forced to clean the building. I noticed it when I came back from the cotton harvest. Of course, the cotton harvest affects the study process very negatively.

The reason why they forced students and teachers to pick cotton is that we have a lot of it, but we do not have enough labor to pick it. They have all gone to Russia to earn some more money.

I have worked as a teacher for 20 years. I am a professional. My salary is 1,600,000 Uzbek Som. I also have my own chemistry training courses and private tutoring. I make an extra 500,000 Som from all this.

We have a lot of public work and activities, e.g. beautification of the city and holiday events in makhallas. In winter, we are forced to go to such events dressed in Atlas (traditional dress, which is very thin in fact). We are also forced to plant trees and flowers. If there is an inspection commission visiting us, we have to chip in money. They take at least 50,000 Som from each salary for some reason. This year we worked in the fields for four months – spring, summer and autumn.

Are you really asking me if I know the laws?! Why do I need them if they do not really work in Uzbekistan?