Key Findings from the 2020 Cotton Harvest 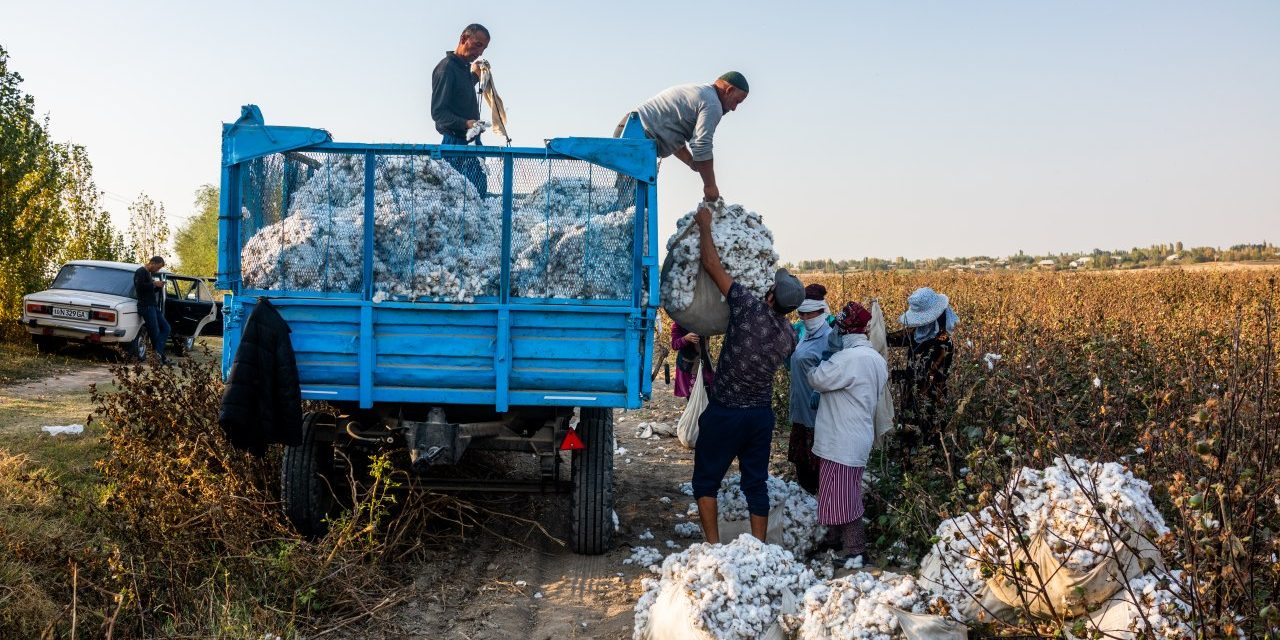 The 2020 cotton harvest was the shortest in ten years, lasting only between 40 and 60 days, depending on the region. Cotton picking began between September 10-20, and by October 20, five of Uzbekistan’s 13 regions—Fergana, Andijan, Khorezm, Karakalpakstan and Namangan— had already reported that they had fulfilled their regional targets.

Uzbek Forum monitored the cotton harvest in six regions, Khorezm, Karakalpakstan, Jizzakh, Fergana, Andijan, and Kashkadarya with a team of 12 experienced monitors. Monitors interviewed cotton pickers, leaders of picking brigades, farmers, mahalla officials, police officers, tax inspectors, employees of the Ministry of Emergency Situations, and employees of dozens of state organizations directly involved in the cotton harvest. In addition, Uzbek Forum monitors also reviewed more than 100 messages on social networks and approximately fifty letters submitted to Pakhtagram, a dedicated Telegram channel of Radio Ozodlik, the Uzbek language service of Radio Free Europe/Radio Liberty. All direct interviews were conducted by trained monitors who have had several years’ experience monitoring labor and human rights issues with Uzbek Forum and have a wide range of contacts in rural communities. All monitors permanently reside in the areas they report on and have the opportunity to visit the monitoring sites several times during the cotton season to test initial observations and document any changes over the course of the season, especially at the end when the risk of forced labor increases.

Government officials in some districts forcibly mobilized employees of organizations, banks, emergency services, and public enterprises to pick cotton and extorted money from market traders: Despite elimination of the government-imposed regional and district production quotas, officials continued to organize and supervise the harvest. Regional and district officials were mandated to ensure that farmers fulfilled their cotton production contracts with clusters and that district and regional production targets were met. Some officials mobilized workers of public sector organizations, banks, emergency services and other agencies or collected money for replacement pickers, despite the large supply of voluntary labor.

Significant variation in practices between districts: Uzbek Forum documented important variations in labor practices between districts, even districts within the same region. In some districts, monitors did not document any cases of forced labor, whereas in others, forced mobilization remained a serious problem. Since only one cotton-textile cluster operates per district, variations are attributable to practices of specific clusters as well as the availability of voluntary pickers, and practices of district officials. In low population regions where cotton is plentiful, there is a persistent shortage of voluntary cotton pickers, which presents a risk of forced labor. Hokims of districts that were falling behind targets faced the choice of risking cotton left unpicked or possibly spoiled by rain or resorting to the forced recruitment of pickers. Despite reforms and an increased awareness among officials of the prohibition of forced labor, they continue to bear the responsibility to oversee a successful harvest, heightening the risk of forced labor. Illustrative examples include:

More cases of child labor observed than in recent years due to school closures, poverty: Although the economic impact of the Covid-19 pandemic increased the number of voluntary pickers who worked in the cotton harvest, it also increased child labor due to increased poverty and school disruption. Uzbekistan, which used to rely on widespread and systematic state-sponsored child labor to harvest cotton, successfully ended the practice by 2014. The government, ILO, and other organizations have invested in significant awareness-raising and education efforts around the unacceptability of child labor in cotton picking. In 2020, however, monitors documented 15 cases of child labor—many more than in recent years. In all cases, the children, generally ages 15-17, picked cotton with their families due to pandemic school closures to help earn money for their families. In interviews with Uzbek Forum, parents said that they didn’t see anything wrong in children helping the family. However, they also said that when they saw a district policeman or other government official, children would hide in the bushes or pretend to have come only for a short time.

Corporate-centered reform of the cotton sector has produced vulnerabilities for farmers and workers: Rapid privatization with little oversight of corporate actors and practices has resulted in increased vulnerability for farmers. Contract farmers have little bargaining power with as clusters, which have taken on monopolistic attributes as there is only one per district and they control pricing and inputs. Farmers are at risk of losing their land if they refuse to grow cotton for the cluster and can face deceptive practices. In 2020, farmers did not know the price they would be paid for the cotton they delivered until after they signed their contracts. For 2021, prices were announced in late December. In the direct farming system, farmers are being coerced into giving up their land leases with no compensation, a strategy spearheaded by the government which is overseeing the transfer of large tracts of land to clusters. Farmers either lose their means of subsistence entirely or become employees of clusters. However, despite promises, there is no obligation on the part of private enterprises to compensate farmers with employment for having taken over their land. The shift to a privatized agricultural sector is having devastating impacts on rural livelihoods.

I cannot choose what to plant and I cannot reduce the amount of land for growing cotton. I am the lowest link, a machine to produce the goods they need. I cannot influence the terms of the contract in any way. They determine it themselves, they set the plan, they set the price themselves, nobody listens to us, they don’t care at all, our opinion doesn’t interest them. The state has cancelled the cotton quota, but I have my own quota for the contract signed with the cluster. I cannot influence anything. I am even now afraid to answer your questions. I am only a machine for work.”

In another example, in December 2020, 32 farmers in the Shavat District of Khorezm region appealed to the President and Prime minister to release them from their obligations to the Textile Finance Khorezm cluster, which is part of the Uztex Group. Farmers wrote that they have been working with this cluster since 2018 and each year their financial condition has deteriorated so much that they do not even have money to plant food crops. This year, the cluster is paying them 4522 soums (approximately US$ .40)  for 1 kg of cotton, while the cost of growing it is 5300 soums (approximately US$ .50). In January 2021, the farmers told Uzbek Forum that they attempted to form a cooperative but were denied by local officials.

Civic space is constrained, tightly controlled, arbitrarily restricted: Uzbekistan’s reform program has produced results in terms of reducing and getting close to eliminating the forced labor of pickers. But this approach, which has prioritized prohibition and enforcement instead of opening space for independent unions, allowing civic participation and building up systems of oversight, transparency, and governance, has also allowed new abuses to emerge. Independent monitoring by workers and civic actors is essential to promote accountability and transparency and to ensure that reforms are robust and sustainable. A vibrant civil society will also help attract responsible brands and investors by giving confidence that the system is transparent, accountable, and can prevent, identify, and remedy abuses.

A Path Forward
There is an emerging need to allow a way for producers not using forced labor to gain access to international buyers, and to provide global brands with confidence they are compliant with international laws. Seeking to recognize the important progress made in Uzbekistan and responding to concerns from the global business community about the need for assurances of no forced labor, strong monitoring, and labor protections, the Cotton Campaign, of which Uzbek Forum is a member, has developed a model that would allow producers not using forced labor to access international markets. Such a model is critical for the protection of the rights of farmers and workers as well as to provide credible assurances to brands and buyers that forced labor does not taint their supply chains.