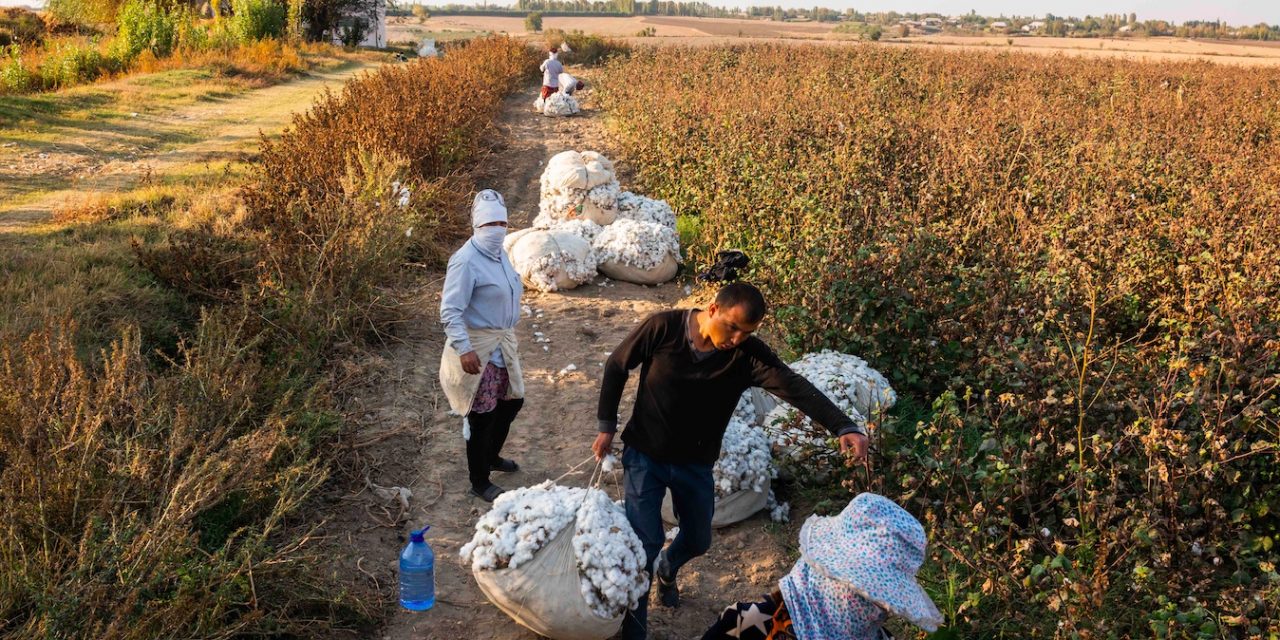 Experienced independent monitors in the Uzbek Forum’s network reported higher numbers of voluntary pickers in places they monitored, and fewer encounters with pickers mobilized against their will. Monitors did document instances of forced labor organized by officials, however, as well as instances in which employees at state enterprises were required to contribute portions of their salary to hire cotton pickers.

“The progress we observed in the 2020 harvest shows there is a real prospect for Uzbekistan to end forced labor definitively,” said Umida Niyazova, director of Uzbek Forum for Human Rights. “We saw many positive changes, but key elements of the forced labor system remain entrenched and some new abuses have emerged. We found districts where cotton was harvested without forced labor, but farmers in those same districts were forced to grow cotton and could not negotiate the terms. As the situation becomes more complex, it is even more important to develop proactive, verifiable approaches that can distinguish producers who still rely on forced labor from those that do not.”

Positive trends in the 2020 harvest resulted from the Uzbek government’s multi-year reform effort to end forced labor and transform the economy, as well as factors unique to 2020. Government measures such as higher prices for cotton pickers, stronger enforcement by the labor inspectorate, and improved recruitment undertaken by some cotton clusters, led to a decrease in forced labor among pickers, particularly in certain districts. The COVID-19 pandemic also led to an increase in voluntary pickers as many Uzbek workers suffered job and income losses and many Uzbek migrant workers were forced to return to the country unexpectedly with few other options for employment.

Some legacy factors remained intact, however, resulting in forced labor in 2020 and creating risks for ongoing forced labor in the future. Above all, local officials retained a key role in organizing and supervising the cotton harvest. Although the government production quota was eliminated in March 2020 and central government officials issued clear and repeated messages on the prohibition of forced labor, local officials were mandated to ensure that districts fulfilled production targets.

Officials in some districts turned to forced labor to ensure these targets were met, requiring emergency workers, bank employees, and employees of state enterprises to pick cotton or pay for a replacement picker or face consequences. Monitors documented more than a dozen instances involving thousands of workers, in which officials forcibly mobilized cotton pickers. In just one example, the Ministry of Emergency Situations issued an order sending 2,890 firefighters to pick cotton in Mirishkor district of Kashkadarya region. The firefighters, who lived in poor conditions, had to buy cotton daily from local residents because they were not able to pick enough themselves. This was in contrast to other districts, where monitors found no forced labor.

“Uzbekistan has the opportunity to become a trusted global supplier, but it will require transparent monitoring and governance models so brands and retailers can verify responsible sourcing,” said Julia Hughes, President of the US Fashion Industry Association. “Brands have a zero-tolerance policy on forced labor, and to overcome the risks inherent from past practices, Uzbekistan needs to implement innovative models that provide high levels of assurance that forced labor will not taint cotton supply chains,” said Nate Herman, Vice President for Policy at the American Apparel & Footwear Association.

The reform process has centered on shifting cotton production from government control to the control of cotton-textile clusters—corporations with vertically integrated production — which has created significant vulnerabilities for farmers that also need to be urgently addressed. Only one cluster operates in each district, so farmers do not have a choice about which cluster to contract with and have no control or bargaining power over the price they will receive for their cotton or the cost of inputs. In at least one instance, farmers trying to form an independent cooperative were told by local authorities they had no choice but to contract with that district’s cluster. Farmers who refuse to grow cotton face losing their land. In addition, the government has pursued a policy of transferring land from small and medium farmers to clusters for direct farming with a devastating impact on rural livelihoods. Under this process, some farmers find work for the clusters as farmworkers for wages. In doing so, they and their employees lose the ability to grow food crops, graze livestock, and gather dried cotton stalks, essential for fuel and animal fodder. Others lose their livelihoods entirely.

“As Uzbekistan seeks investment in its emerging textile sector and economic opportunity for its citizens, it needs to be deliberate in setting up pro-active mechanisms to avoid a corporate-driven race to the bottom,” said Cathy Feingold, International Director of the AFL-CIO. “Rather than replace an abusive government model with an abusive private model, the time is right for a new responsible sourcing model that puts vulnerable workers in positions of greater power to protect their own labor rights and provide verifiable assurances that this supply chain is free of forced labor and other egregious abuses. Such a model would also ensure that Uzbekistan makes good on making real progress on freedom of association for workers, farmers, and employers as it has committed to under ILO Convention 87.”

Seeking to recognize the important progress made in Uzbekistan and responding to concerns from the global business community about the need for assurances of no forced labor, strong monitoring, and labor protections, the Cotton Campaign has developed a model that would allow producers not using forced labor to access international markets. The Cotton Campaign stands ready to refine and pilot this approach together with other partners who share the same objective: to encourage and facilitate responsible sourcing that will empower workers and farmers, protect labor and human rights, and attract global brands looking for opportunities in a reforming Uzbekistan.

Brands want to source from countries with strong, independent civil societies that can create the enabling environment for strong monitoring and enforcement of supply chain standards. Uzbekistan’s reform process has prioritized privatization and enforcement without concurrently empowering the development of civic actors, such as NGOs (nongovernmental organizations) and independent labor organizations, that would promote transparency and accountability for labor reforms and protect rights. A long-awaited new code on NGOs has yet to be finalized. Uzbek authorities continue to arbitrarily restrict civic freedoms and prevent the registration of independent NGOs, including those that monitor labor rights, through burdensome registration requirements and repeated rejections of registration applications for spurious reasons. Farmers and farmworkers do not have independent unions or organizations that represent their interests and that could allow them to bargain collectively or protect them from reprisals. Some cluster employees have faced retaliation, including threats, intimidation, and loss of jobs, for speaking out about problems or asking for better working conditions.

The Cotton Campaign sees it as urgent that the Uzbek government takes steps this year to revise the NGO Code and allow independent NGOs to register, in order for the country to comply with international human rights standards and engage with the expectations of the country’s international partners, including brands and investors.

Uzbek Forum is a Berlin-based NGO dedicated to improving the human rights situation in Uzbekistan and strengthening and promoting civil society.

The U.S. Fashion Industry Association represents brands, retailers, importers, and wholesalers across the value chain, based in the United States and doing business globally.

The American Federation of Labor and Congress of Industrial Organizations (AFL-CIO) is a democratic, voluntary federation of national and international labor unions working to improve the lives of working people.