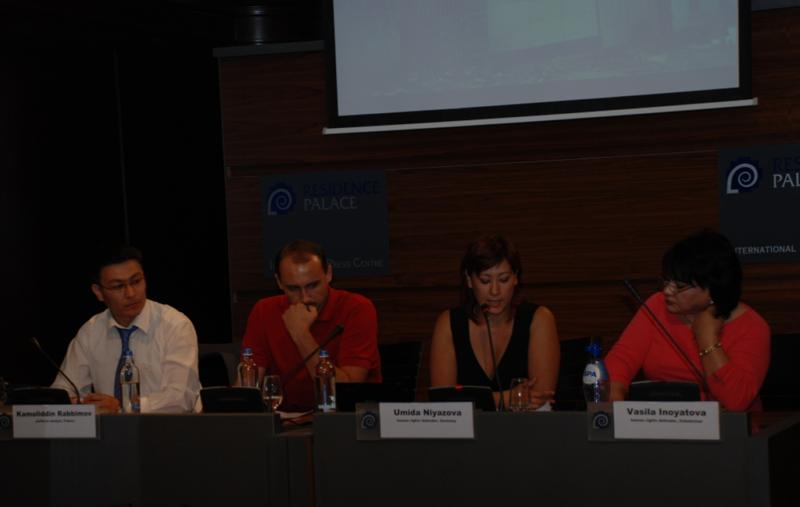 Tue, 07/13/2010 – 09:07
On July 7th, 2010 a press conference with regards to the ethnic violence in Kyrgyzstan was held in Brussels. Particularly in the spotlight was the issue that the Kyrgyz military condoned the ethnically-based violence against the Uzbek population (according to Uzbek civil activists).

Umida Niyazova (Executive Director of UGF) attended the press conference. Her speech is included below.

From June 11th to 14th, a mobilized group of people attacked houses of ethnic Uzbeks of Kyrgyz nationality; raped women, burned houses, and killed those who came their way. During these three days, at least 2,000 people have been killed. This conflict is affected by a high level of brutality and violence. On the pictures you see can the word “SOS”, written by Uzbeks calling for help. Those days were clear that the authorities in Kyrgyzstan were unable to protect the citizens.

Today, the situation in southern Kyrgyzstan remains unstable. Uzbek people do not trust Kyrgyz security forces who failed to protect them. They also do not trust Kyrgyz doctors, journalists, NGO representatives, and accuse those of tacit support to Kyrgyz nationalists. Uzbeks are still afraid to go out into the streets as they are continued to be attacked, beaten and insulted.

Kyrgyz authorities, instead of to objectively investigate the reasons for this large-scale inter-ethnic violence, are deliberately provoking a new conflict. If this continues, then in the near future we can expect a repetition of violence in the region.

These days, the police and military in Kyrgyzstan conduct so-called “preventive operations”, under the pretext of seizing weapons. It should be noted that the raids are conducted only in Uzbek neighborhoods. Those living in these quarters say that armed men in masks burst into homes of Uzbeks, beat people for no reason, steal money and jewelry, and in some cases kill people. During a raid in the village of Nariman on June 21st, the police killed two people, and one man was beaten to death. That is, the police used extreme violence while beating the man lying on the ground so that he died in the hospital that same day. This fact is a crime and an illegal execution, but no military or police officer has been yet punished.

Kyrgyz authorities began arresting civil society activists who represent the leaders of the Uzbek community. For example, a well-known journalist and author of the unofficial translation of the new version of the Kyrgyz Constitution into the Uzbek language Ulugbek Abdusalomov, as well as human rights activist Azimjon Askarov, both of whom documented the events, are accused of inciting ethnic hatred. Amnesty International declared both activists as prisoners of conscience.

I am convinced that the country’s mono-ethnic government is unable to conduct an independent investigation, as it does not even recognize the most obvious facts. The fact is that victims in this conflict come from the Uzbek side, whole Uzbek-populated quarters were destroyed and burned down, in these mostly Uzbeks died, and hundreds of thousands of refugees who left their homes are Uzbeks. Under these circumstances, the Kyrgyz justice still accuses Uzbeks as being the perpetrators of the conflict.

Nationalist tendencies infected not only the military and police but rather it seems the whole Kyrgyz society. For example, shortly before the conflict, Kyrgyz press published articles including content referring to the greatness of the Kyrgyz nation. To quote from the newspaper Alibi, from June 8th, 2010, “. There is, in our pride, it would be correct to declare, a cultural war against our brothers Uzbeks that live among us and do not fully realize that Kyrgyz are those who are Kyrgyz.”

I would also like to point out that the conflict has its socio-economic roots. In a similar way when Nazi Germany blamed the Jews for monopolizing the finance sector, Kyrgyz accuse Uzbeks that they were more successful in business and led a prosperous life. Eyewitnesses say that the Kyrgyz mainly looked for gain, attacking houses of wealthy Uzbeks and looting their property, after which they then set the houses on fire. On many photographs, you can see looters taking away property.

Azimbek Beknazarov, a senior official in the interim government of Kyrgyzstan, in an interview on state television, said that in the days of the conflict he issued weapons to a group of Kyrgyz boys, among which was also his son. These groups called themselves “warriors”, training themselves in order to “restore order”. The interim government has armed completely unprepared aggressive young men and sent them to restore order in the area of inter-ethnic conflict.

On the pictures you can see very young armed Kyrgyz guys. Many of them came from other areas with the sole purpose to punish the Uzbeks. Unfortunately, we have not heard that one of these men was wanted or would have been interrogated in connection with their direct involvement in the conflict.

We continue to receive new facts that show a high degree of violence committed during the conflict. And this phenomenon should also be studied from a psychological point of view.

I would like to draw your attention to those days in Kyrgyzstan when commercials were filmed within the social framework of “forgive each other. We are all guilty”. As stated in the press, this campaign is to reconcile the conflicting parties. “The dead do not come back, but we can re-learn to live in peace if we just each forgive others,” – says the statement, which is at this time joined by about 50 people and organizations in Kyrgyzstan.

The words “we are all to be blamed” are not the words that could reassure people who have lost everything they had, their loved ones, homes, property.

It is clear that Kyrgyzstan was not able to conduct an objective investigation, and we very much hope that the UN or the European Union will initiate a thorough and objective international investigation into the events from June 11th to 14th.

Finally, according to the UN High Commissioner for Refugees Antonio Guterres, the total number of victims is about half a million people. Kyrgyz authorities asked the international community to provide humanitarian aid for the reconstruction of destroyed cities. Indeed, the country is in a dire need of humanitarian assistance to hundreds of thousands of people whose homes were burnt down and who have nowhere to live this winter. But it should be noted that along with humanitarian aid Kyrgyzstan needs a large number of independent observers, in order to make sure that humanitarian aid is distributed fairly, will not be stolen and not be out of reach of those who need it the most.

For any queries and for further information, please contact info@uzbekgermanforum.org