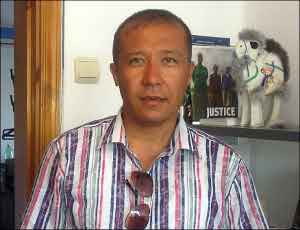 Washington, DC – The Cotton Campaign welcomes the decision of a court in Uzbekistan to lift the terms of probation for human rights defender Uktam Pardaev 10 months early. Pardaev was arrested on November 16, 2015, following his reporting on forced labor during the 2015 cotton harvest. The Uzbek authorities released Pardaev on January 30, 2016, after convicting him to a 5 years 6 months prison term on fabricated charges, and subsequently changing the sentence to 3 years’ probation. Under probation, Pardaev had to register with the police twice a month and had to obtain police permission to leave his hometown of Jizzak or leave his home after 10 pm.

“Uktam Pardaev spent two years under unjust state surveillance that restricted his human rights work and his ability to travel within his own country,” said Umida Niyazova, director of the Uzbek-German Forum for Human Rights (UGF). “Pardaev should not have been arrested in the first place and still has a criminal record. We urge the Uzbek government to exonerate him and drop all further charges against human rights defenders, and particularly those who protect Uzbek people from forced labor.”

Pardaev for years has advocated on behalf of victims of corruption and monitored the use of child and forced labor in the cotton sector. After his arrest, police told Pardaev that he is subject to travel restrictions and a curfew, although those were not stipulated in the sentence. Police have also surveilled and intimidated Pardaev, as well as his relatives and friends. In 2016, authorities charged Pardev with illegal taxi driving for his contact with France 24 reporters and imposed a fine which, if not paid, could have resulted in the confiscation of his car. France 24 later ran a story “Uzbekistan reinforces its tight grip on election and country,” highlighting continued state-orchestrated forced labor in Uzbekistan’s cotton fields.

While the lifting of Pardaev’s probation is an important first step, the Cotton Campaign calls for an impartial, thorough, and transparent investigation into his wrongful conviction and mistreatment in detention and to hold those responsible to account.

The Uzbek government should also cease its interference in civil society and allow for the opening of civic space in the country by simplifying procedures for registering organizations, lifting undue restrictions on their operations and funding, and ending restrictions on peaceful assembly and expression in accordance with the International Covenant on Civil and Political Rights, ratified by Uzbekistan in 1995.

The Cotton Campaign also urges the Uzbek government to drop all criminal and administrative charges and penalties, pending and resolved, against other human rights defenders, including:

In 2014, Fakhriddin Tillayev was sentenced to eight years on trumped-up charges in retaliation for organizing an independent labor union. Tillayev and his fellow activist Nuriddin Jumaniyazov were falsely accused of human trafficking, tortured and convicted in a trial that violated fair trial standards. He currently remains incarcerated and should be released and his conviction quashed. Nuriddin Jumaniyazov, who was sentenced to six years on the same charges as Tillayev, died in prison of complications related to diabetes on December 31, 2016, but this information was not made public until June 15, 2017. Jumaniyazov should be exonerated posthumously.

On August 11, 2017, an Uzbek civil court ruling deprived Eshonkulova of her residency permit. She was not invited to the hearing and unknown men allegedly threatened the 80-year-old landlord who submitted the claim to unregister her. The authorities are using an antiquated registry permit system from Soviet times to target Eshonkulova for her human rights work. Eshonkulova and now her daughter, have both been denied their exit visas. Eshonkulova should be granted a residency permit to stay in Tashkent, retaliation against her and her family members must stop and their legal rights restored, including the right to travel abroad.

A journalist and human rights defender, Dmitry Tikhonov documented labor and human rights abuses connected to cotton production in Uzbekistan and regularly provided information to the ILO and World Bank. In December 2015, Tikhonov was forced to flee Uzbekistan after his home office was destroyed by fire. He still faces charges of “disorderly conduct” and other spurious criminal and administrative charges connected to his monitoring. He now resides outside Uzbekistan, unable to return home. The charges against Tikhonov should be dropped and the circumstances of the fire that destroyed his home investigated.

Elena Urlaeva, the head of the Tashkent-based Human Rights Alliance of Uzbekistan and a longtime human rights defender, has documented forced labor in Uzbekistan’s cotton fields for the past 16 years. Authorities refuse to grant Urlaeva an exit visa to allow her to travel outside the country, including for medical reasons. On her last request for an exit visa, the local department of the interior replied that they were not obliged to respond to Urlaeva since she has been declared legally incompetent. The 2006 decision declaring Urlaeva legally incompetent should be quashed and she should have her full legal rights restored, including the right to travel abroad. She should be granted an exit visa.

Following the hopeful commitments made by Uzbek President Shavkat Mirziyoyev in his speech to the United Nations General Assembly on September 19, 2017, the Uzbek government should take immediate, concrete steps to protect independent journalists, human rights defenders, and other activists against any actions that may constitute harassment, persecution, or undue interference in the exercise of their professional activities, or of their right to freedom of opinion, expression, and association. Exoneration of the above-mentioned individuals will demonstrate a good faith effort of the Uzbek government and establish a way forward toward a better future.