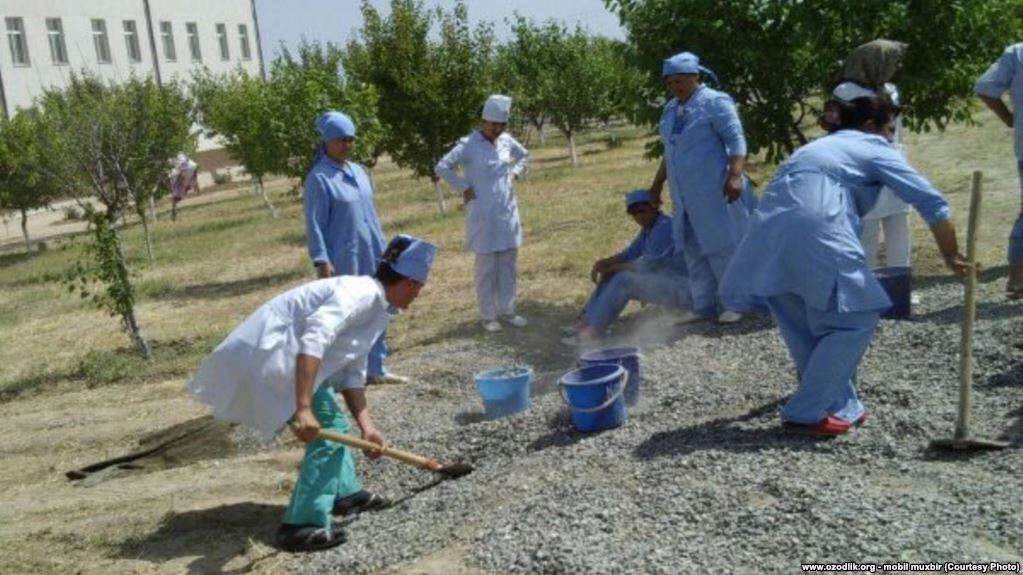 The President of the Republic of Uzbekistan, Shavkat Mirziyoyev, claimed that he is perfectly aware of the real situation in the regions and said that putting everything in order before his visits do more harm than good. The President threatened hokims [ed. – local governors] with severe consequences for forcing teachers to participate in beautification works and said it amounted to betrayal to force the involvement of employees in the public sector.

On April 13, 2018, during a video conference in the Saikhunabad district of the Syrdaryo region, Shavkat Mirziyoyev, discussed the widespread problem of forcing public sector workers, especially teachers and nurses, to participate in beautification works.

The Head of the State was also dissatisfied with the display organized by regional authorities before his visits. The video recording of Mirziyoyev’s speech in Uzbek and in Russian (“so that everyone understands”) was published by the President’s press service.

“Of course, I cannot come incognito. I announce that I am going to a certain region or a certain district one or two days beforehand. For my visits, I select the most problematic districts or at least, I try,” the President said.

“Frankly, it is disgusting. The deception, forcing people, especially public sector employees, teachers, and students, to gentrify and sweep the streets is a betrayal of the state. It is a betrayal not only of me but also of the state policy,” he said.

“I know very well what is behind the walls, what streets in Uzbekistan have been swept, and where trees have been felled. People will not say “thank you” if you paint the street that I drive along… We have a lot of friends as well as enemies. Your enemies will benefit from your actions. Be aware of it, heads of regions and districts,” the Head of State said.

Shavkat Mirziyoyev said that he is aware of the death of the school teacher, Diana Yenikeeva, in the Kattakurgan district of the Samarkand region.

“Since the first day of our work, we agreed to serve each other honestly and fairly, primarily, the people. Who needs this pretense? There is a lot of pain and regret in my heart. No one except me knows what conditions our people live in. Despite my smile [ed. – in public], I have a lot of pain inside. Honestly, if you are my friends, stop it… We have done nothing for so many years. I know that we cannot do it in a year and a half. I know about the unemployed and dissatisfied people. Be aware of them too. Today, perhaps, somebody put you up to this. However, the more challenging problem is to tell me about it. I came here to listen to people and their problems and to improve the situation. Do not give me pompous words,” Mirziyoyev told the audience.

The Head of State reminded the audience once again that the times of “appraisal and applause” are over. “They are the reason we are 20 years behind, in all spheres. This time, the time of deceit, empty words, and appraisal is over. We don’t have anything to boast about or to be proud of. We are at the beginning of our path, of a very difficult path,” Mirziyoyev emphasized.

He added that Uzbek people are tired of grandiloquent words. “I do not ask for much preparation for my visits. I will order influential people around me [ed. – to control] that these hokims and local authorities do not create the scenery for my visits,” the President said.

On March 14, 2018, teachers of school No.42 in the Kattakurgan district of the Samarkand region were forced to participate in gentrification works. One of them, Diana Yenikeeva, was killed by a truck.

The Kattakurgan district hokimiyat [ed. – governor’s office] together with the regional public education department, have claimed that the teachers were not forced to clean the streets and that Diana Yenikeeva was hit by a car while crossing the road.

A hokim of the Samarkand region, Turobjon Djurayev, claimed that “public sector employees are not involved and from now on will not be engaged in beautification works by local authorities.”

However, the Kattakurgan district Prosecutor’s Office later acknowledged that teachers were forced to participate in public works, which resulted in the dismissal of the head of the district public education department and the school principal.