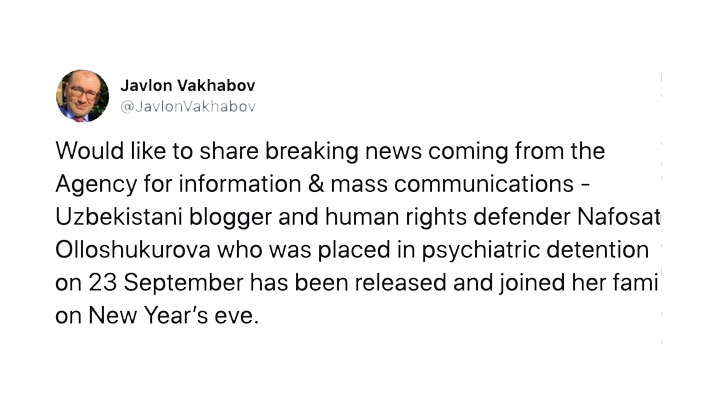 On the first days of the new year I received an alarming letter from a partner of Uzbek-German Forum for Human Rights (UGF) stating that an officer of the State Security Service of Uzbekistan (FSB) had called her. The “conversation” was clearly intended to intimidate and hinder work on collecting information on human rights violations and in particular, forced labor in the cotton sector.

The conduct of the FSB officer was identical to the methods employed during the dictatorship of Islam Karimov, lending credibility to widely held suspicions among human rights defenders that President Mirziyoyev’s rhetoric of openness and liberalization is hollow.

The FSB officer left no doubt that there would be severe repercussions if our partner continued to cooperate with human rights organizations.

This is a very familiar and sinister scenario.

In Uzbekistan today, two versions of reality exist side by side. One is for the outside world and the international community and investors; it is an image of a reforming country in transition to democracy which appeals to international banks and organizations. Conferences of all kinds are taking place in Tashkent to which international experts and investors are invited to meet Uzbek officials at the highest level.

However, Uzbek political refugees and dissidents are not included on the guest list and have no prospect of participating in the new and exciting opportunities on offer. When Uzbekistan’s most famous modern writer, Hamid Ismailov, tried to return to his home country in anticipation of a changed atmosphere, he was apprehended at the airport and sent straight back to London. He deserves an apology, or at the very least, an explanation.

Personally, I too would like an apology from the Uzbek government for the four months I spent in prison and my subsequent life in exile far from my home and family, but I have little faith that the authorities would ever acknowledge injustice of this kind.

In the course of my human rights work, I am more often confronted with the other version of reality in Uzbekistan, one which leaves me concerned for the safety of our colleagues. The fate of activist Nafosat Ollashukurova, who was forcibly detained for three months in a psychiatric clinic and released only a few days ago, can happen to anyone. After her release, Nafosat wrote a blog that describes the attitude of Uzbek officials towards civil society:

“When journalist Mahmud Rajabov and his family members were arrested on their way to Tashkent, we were brought to the Department of Internal Affairs in the city of Urgench. That evening a man came to me who introduced himself as an official from the Ministry of Internal Affairs and said that he considered international organizations to be enemies. He noted that this was not his personal opinion, but the opinion of the ministry.

During my work, I have repeatedly heard these words from many police officers. They said that international organizations give money to human rights defenders in order to destroy peaceful life in our country.

Why do employees with such backward thinking continue to be employed? Who taught them to think so narrowly?

If they have evidence of these allegations, then why does Uzbekistan accept international organizations?

Instead of being grateful to organizations that provide grants for the development of civil society, why are law enforcement agencies openly calling international organizations and us human rights defenders enemies?”

The new Uzbekistan has spearheaded a savvy PR campaign in which Uzbek officials, including diplomats and cabinet ministers, often take to social media to communicate the message that the country is “open for business”. It would indeed be a sign of something new if these same officials were to tweet the good news that a human rights activist was released and those who detained her have been punished.