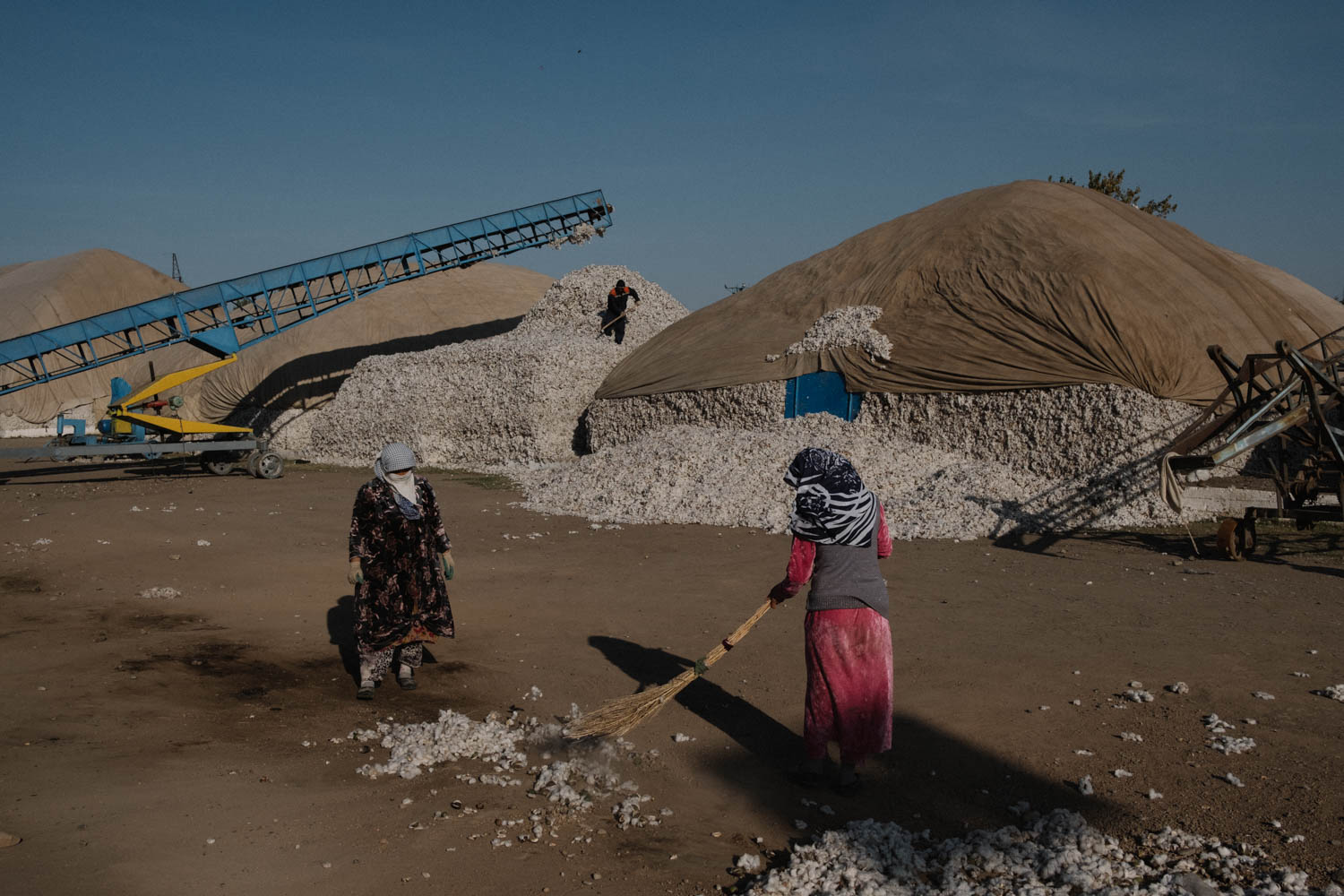 The Supreme Court of Uzbekistan will soon pass judgment on a failed appeal against the verdict of the criminal court of the Syrdarya region in December 2018 in a case of embezzlement at the “Sardoba Pakhta Tozalash” cotton gin plant in the Akaltyn district.

The director of the plant, along with six other employees were found guilty of embezzlement, misappropriation, and abuse of office and sentenced to between eight and two years in prison as well as substantial fines. Inspection of company records had revealed a shortage of about 7.477 tons of cotton, which according to the prosecution, cost the state approximately 7.7 billion soum (917,500 USD), and had been paid to farmers for non-existent cotton. The case has revealed the inherent contradictions of implementing a state-set quota for cotton which puts farmers and local district officials under pressure to fulfill and, as reported by witnesses in this case, is driving corrupt practices.

Although several defendants admitted that they had sold cotton to private individuals and received money from farmers in return for falsifying the volume of the cotton they delivered, they argued that the numbers were insignificant. They claim that the heads of the district and region were primarily responsible for the shortfall and had forced plant workers to exaggerate the amount of cotton they received from farmers.

Human Rights activist Malohat Eshonkulova spoke with several people involved in the case, including relatives of the defendants who disclosed further details.

At the end of September 2017, the director of the “Sardoba Pakhta Tozalash” gin plant, Ganisher Baibusinov, arrived home late at night with his head bleeding from an injury. He had returned from a meeting held in the hokimiyat [local administration – Ed.] of the Syrdarya region, where the hokim [local official – Ed.], Gofurjon Mirzaev, had twice struck him on the head with a truncheon. Baibusinov was later treated at the local hospital where he received stitches. The assault was apparently motivated after the hokim Mirzaev learned that the cotton gin plant had lowered the grade of cotton it received and adjusted the weight of the cotton to reflect the detritus and moisture content.

Lowering the grade of cotton lowers the selling price while lowering the weight meant that officials could no longer meet their quotas. Failure to meet cotton quotas in Uzbekistan often leads to penalties, including dismissal and punitive fines.

Baibusinov told the Syrdarya criminal court that the regional hokim, Gofurjon Mirzaev, struck him on the head with a truncheon, demanding better cotton figures so that the Akaltyn district could fulfill the state quota and comply with the orders of the district hokim, Dilmurod Fazilov. When asked by the judge why he did not complain about being beaten, he replied that the police chief and the prosecutor had been present and had personally witnessed the assault.

Umida Ismanova, a laboratory assistant at the Sardoba Pakhta Tozalash gin plant and one of the defendants in the case, said that in the fall of 2017, she and other plant workers were under intense pressure from the district and regional authorities who demanded that they falsify the real cotton figures. She explained how she was ordered to accept cotton of any grade as soon as farmers began delivering it to the plant. She points out that because the military had been mobilized to pick cotton to make up for a shortfall in voluntary pickers, the cotton was of a poor quality. The military’s main task was also to meet the quota and therefore paid no attention to the quality of the cotton, which was often humid, adding to the weight, and mixed with stones and other detritus to artificially increase the weight of the delivery.

Ismanova says she called Dilmurod Fazilov, the district hokim of the Akaltyn district, in early October and explained her concerns that the high moisture content of the cotton could contaminate the other higher-grade cotton which is put into huge bales of 400 kg and is stored for up to six months in the open air, potentially ruining the entire cotton harvest. Although this was the first harvest, farmers were also bringing lower grade cotton but complained that they would be paid less if their cotton was recorded at a lower grade and insisted that it received a higher grade. The farmers said that they would otherwise not be able to repay the loans they had received from the bank for growing cotton. Ismanova says Fazilov dismissed her concerns and told her to accept the cotton to “help the farmers”.

Ismanova then called the office of Gofurjon Mirzaev, the hokim of the Syrdarya region, and explained the situation. According to Ismanova, Mirzaev, arrived at the cotton gin plant and began shouting and accused Ismanova and other laboratory technicians of imposing excessively high deductions for contamination because [ostensibly] she and her colleagues had a personal interest in selling the excess cotton. Ismanova says the contrary is true and that she was afraid of falsifying figures because that would show she had been negligent in her work, putting her at risk of dismissal.

Despite her pleas, the regional and district leaders demanded that the [cotton quality] indicators are falsified and, with the tacit consent of the factory director who had just been badly beaten, the plant continued to falsify the indicators for poor-quality cotton.

However, to protect herself, Ismanova decided to keep two logbooks; in one, she recorded the actual data on the humidity and contamination of the cotton and recorded what percentage of the cotton weight should normally be withheld. These figures were verified with farmers’ signatures. In the other, she recorded the falsified data. She informed the plant’s director, Baibusinov, that she was keeping a record of the actual data who made no objection. On October 28, at the peak of the cotton season, and after her appeals to the district and regional hokims were unsuccessful, Ismanova resigned from her job, afraid of the consequences of fraudulent practices.

During the investigation, all the laboratory assistants gave similar testimony to Ismanova’s, confirming her claim that they were under intense pressure from managers who demanded enhanced cotton figures.

Ismanova handed over the logbooks she had kept to the prosecutor’s office with the actual data and signatures of the farmers who submitted cotton. She explained that the shortage of cotton was most likely the result of forced falsifications and that the cotton was contaminated with detritus but was registered as higher grade cotton. “If a farmer submitted 15 tons of cotton mixed with detritus, it was recorded as 15 tons of delivered cotton and, accordingly, the farmer received payment for 15 tons. But when it was cleaned, five tons were thrown away like rubbish, and so there would be a shortage of cotton. If we check the logbook, we can see that “the deduction for detritus should have been 70-80%, when in fact, cotton was accepted with only a deduction of 25-30%,” she explained. According to Ismanova, ten farmers testified at the trial and confirmed that the cotton they submitted was of poor quality as it had been picked by the military. The judge asked the farmers whether they paid the plant workers for overstating the cotton figures. All of the farmers replied that they had not paid any money but confirmed that the cotton had been of very poor quality.

Her evidence and testimony were not taken into account during the case and, although Ismanova was not arrested with the others, she soon became the accused instead of the witness. She was convicted and sentenced to four and a half years of partial restriction of freedom: she must be at home from 10 pm to 6 am, is prohibited from leaving the Syrdarya region and has been ordered to pay 1.424 billion soum (167,000 USD) in damages to the state.

“I will never be able to pay such a fine in my life since I lived on a small salary of 600,000 soum and did not receive any other income. My husband left me with three children and I now live with my parents who are pensioners”, said Ismanova in a video interview with human rights defender, Malokhat Eshonkulova.

On January 30, 2019, an appeal hearing took place in which the court sentence was upheld. Lawyers then filed a complaint with the Supreme Court of Uzbekistan and await the decision imminently.

Note: In the autumn of 2018, 10,000 soldiers were mobilized to pick cotton in the Akaltyn district of the Syrdarya region.