“You will not get out of here alive.” Bobomurod Abdullayev told his mother about the torture he was subjected to at the National Security Service pre-trial detention center 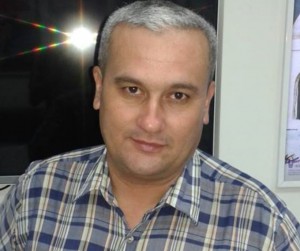 Uzbek journalist, Bobomurod Abdullayev, was secretly arrested in Tashkent on September 27, 2017. A few days later it was revealed that he was being held in the pre-trial detention center of the Uzbek National Security Service (SNB). Surprisingly, at the end of December, Bobomurod refused the services of one of Tashkent’s best lawyers, Sergey Mayorov. Bobomurod, therefore, remained without legal assistance, with his family receiving no communications from a state-appointed lawyer. On January 10, 2018, during a meeting at the SNB pre-trial detention center, Bobomurod told his mother and wife that he had been brutally tortured. This was evident from his emaciated appearance, sunken eyes, and the veins on his hands which were so badly swollen that they could easily be counted.

According to the BBC, Bobomurod Abdullayev’s mother, Gavkharzhon Madaminova, said that when she asked her son why he had refused the services of Mr. Mayorov, he replied that he had been forced to. “On December 14, when Mayorov came to me, my back was injured. He asked if I could take off my clothes and show him but I refused,” Abdullayev told his mother.

According to Abdullayev, the SNB investigators said that if he did not admit to everything that he was charged with, he would be a dead man. “It turns out that I will remain in custody throughout the entire trial. They said that if I did not admit to all the charges, I would not get out of there alive,” Bobomurod told his mother.

He added that every time any details about him were disclosed, he was tortured. Bobomurod, therefore, asked his mother not to tell anyone about what she had seen or heard in the pre-trial detention center. “Tell everyone that I’m fine. I have no other choice, Mum. Do not go anywhere. Pray for me,” he said. “When I reached for his back to raise his clothes and look at the wounds, he pushed my hand to one side and said, “it’s not worth it.” All this time, we were watched by an SNB officer,” says Gavkharzhon Madaminova.

Since the meeting with her son, the elderly woman has been under such severe stress that she is unable to sleep at night for constantly thinking about her son. Despite his request for her to remain silent, she still decided to write to the president and ask for his help.

“After meeting with Bobomurod, his mother and wife did not dare talk about the torture for a long time so as not to expose their loved one to even more suffering. Report torture or not? This is the terrible choice many relatives of people in custody have to make, as they know that the Uzbek legal system will not protect their loved ones.

Even if Bobomurod did not tell his family how brutally he was being treated during the entire investigative process, it was clear that he was being subjected to torture when he “voluntarily” refused the services of one of the best Tashkent lawyers, Sergei Mayorov.

‘During the meeting, he could barely stand and leaned against the wall,’ Bobomurod’s wife recalls. He was told to make a confession at the trial, because otherwise ‘he would return to the SNB basement again.’ Under these circumstances, I don’t think it matters what Bobomurod says in court. More important is the evidence that will be presented by the investigators, Alexander Veselov and Nodir Turakulov, who sanctioned the torture.

Bobomurod Abdullayev’s case is as terrible and absurd as the cases that were falsified in the days of Stalin’s repressions. Those times have long since passed, but when you read the charges against Bobomurod, which refer to an operation to seize the country, named ‘Zhatva’ (Harvest), in which Bobomurod was allegedly preparing ‘great masses to stage a coup in four large cities in Uzbekistan’, you discover that the charges have been written using the same language that was used 85 years ago during a time of Great Purge.

If the allegations of preparing ‘Operation Zhatva’ are true, then we are still waiting for evidence from the SNB of Uzbekistan. How can one ordinary man organize a coup in a state where law enforcement agencies have absolute power? We are waiting for details from the SNB about how many people Bobomurod gathered to organize the coup, how many weapons they had, who supported him in Tashkent and other cities where he was allegedly preparing an uprising? Where are these people? Were they arrested? What real potential for the coup d’état and the uprising of the masses did Bobomurod and his ‘accomplices’ have?

I am sure that there is no evidence because these allegations have been fabricated. They are fake. They only exist in the minds of SNB staff. But in order to avoid the burden of proof, the investigators have forced Bobomurod to refuse the services of a good lawyer and to keep him in absolute isolation in an attempt to break his will.

A couple of days ago, liberal-minded people rejoiced when the chairman of the SNB, Rustam Inoyatov, was dismissed. I hope that his dismissal will help Bobomurod’s case and that he will soon be released. But it is very important that the SNB in its present form is dismantled and new structures created in their place. Nobody is arguing that the state does not need the means to combat terrorism and organized crime, but this requires a security service that is accountable and adheres to the rule of law.”

Allegedly, Bobomurod Abdullayev, who had been a long-time reporter at the Institute for War and Peace Reporting (IWPR), was writing articles criticizing Karimov’s regime and Uzbek security services under the alias Usman Khaknazarov.

The original article was published on February 5, 2018, by Fergana news agency.